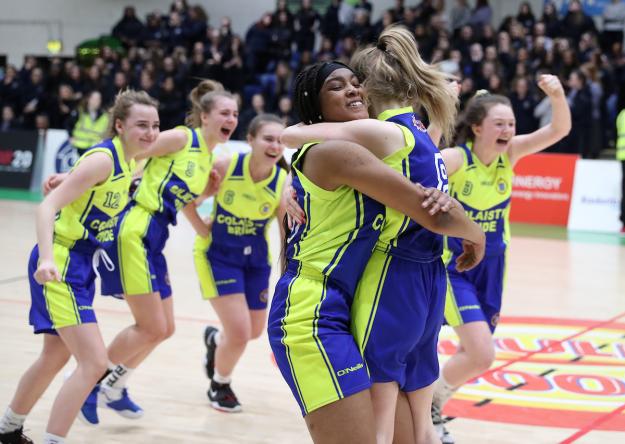 U19 B Girls All Ireland Schools League Final

U19 B Boys All Ireland Schools League Final

It was another close encounter for the under 19C girl’s league final between St Nathy’s Ballaghadereen and Kinsale community school in the last tip-off of the day in Tallaght.  It was clear from the start this was going to be a defensive game with both teams setting up in zone and clogging up the lane on every drive. Kinsale started the brightest and some great post work and offensive rebounds from vice-captain Lorraine Collins gave Kinsale an early lead of 10-7 at the end of the first quarter.

In the second St Nathy’s captain Sasha Lavin continued to lead her team adding another two points to her three from the first quarter. Amy Doorey also added a big three pointer to keep St Nathys within touching distance. However, scores from under 16 Geraldine Tyner and another two points from Collins ensured Kinsale finished the half with a 17-12 lead.

The third quarter started as the second ended with both teams playing very defensive. Several fouls sent both teams to the line but neither team could make the other pay with a number of missed free-throws ensuring a low scoring quarter. Lavin continued to be the focal point for St Nathys adding another 4 points in the third. St Nathys defence finally started to box out Collins and deny her the ball in the post but it was Arianna Price who drove Kinsale on. Price had a number of steals which were very important as most of them denied St Nathys from pushing the ball in transition. Price was also a force on the offensive end, hitting three points in the third including a lovely jump shot from the elbow. Both teams finished with seven points each in the third ensuring Kinsale held on to the lead of 29-14.

The fourth saw the lowest scoring quarter of the game with only a handful of scores. Tyner added another score for Kinsale showing she is well able to handle herself at this level. Lavin once again tried to drag her team back into the game, but it was Arianna Price who made sure Kinsale would not lose the lead they had held onto from early in the first quarter. Another steal in transition and another left-handed jump shot from Price ensured the league cup was heading to Cork. Kinsale ran out winners of the under 19 C girls league on a score line of 30-23.

An exciting U19 B Boys final was expected and it didn’t disappoint. Both teams came out looking to be aggressive offensively and showcase their ability to score. Tadhg O’Connor had eleven first quarter points but the highlight was Sean Teahan’s second three which he made from just over the half way line at the quarter buzzer for Coláiste na Sceilge. St Patrick’s Academy looked to score both inside and out with Kajus Zagrekalis and Fionntan Oliver to the fore with a combined twelve points but it was 21 – 16 to Coláiste na Sceilge going into the second.

St Patrick’s Academy adjusted their defence and locked down Coláiste na Sceilge, holding them to just four points. At the other end it was Michael McGleenan, Joseph Fanthorpe and Oliver who seemingly scored at will to leave it 25 – 34 at the half to St Patrick’s.

Coláiste na Sceilge knew they had to come out and make adjustments, Teahan had two three’s to get them back into the game before Fanthorpe went on a run of six unanswered points to restore St Patrick’s lead. Cathal O’Shea came into his own with nine points to eat into that lead and it was 47 – 53 going into the fourth.

With just four points between them with just over five minutes to go, St Patricks changed their defence to a full court man to man and it took Coláiste na Sceilge out of their rhythm. Despite Teahan and O’Shea keeping the scores coming it wasn’t enough. Fanthorpe and McGleenan kept things tight with Zagrekalis getting a couple of crucial steals as well a dagger three to push St Colmcillies over the line and send their supporters wild. It finished 61 – 69.

U19 B Girls Final

This final was a repeat of the Schools Cup final in January, St Colmcille’s Community School came out on top that day on a score line of 59 – 40. St Patrick’s Academy were determined to have learned from that loss and they changed things up. In what was a very cagey start for both teams, it was defence that was shining. Eimear Hughes, Abigail Rafferty and Bronagh Barker scored for St Patrick’s while it was Emma Mullins, Emma Garvey and Abby Steacy for St Colmcillies. It was 6 – 8 to Colmcillies going into the second.

Rafferty was a force to be reckoned with on the boards, she ensured that St Colmcillies weren’t getting any second attempts with Barker and Clair Pinkerton with five points that kept St Patrick’s in touch. Hannah Byrne and Mullins were starting to show some of their scoring prowess with all eleven points to extend Colmcillies lead to four at the half, 15 – 19.

The third was more of the same, Laura Canning had five points with Rafferty and Hughes also getting some scores but it was Emma Mullins for St Colmcillies that knocked down three huge shots from downtown that was the star in pushing out the lead to 26 – 31.

St Patrick’s needed to get the first score you felt to ensure the deficit didn’t get out of sight and they did, Canning hit a big three from the top of the key on her way to a further seven points. Rafferty also had seven and controlled the game down the stretch. It was Byrne, Garvey and Claire Davitt that executed for St Colmcillies but it was not enough as St Patrick’s closed out the game and won on a 44 – 40 score line.

U16 B Girls Final

A nervous start to this U16 B Girls school league final saw both teams miss some early attempts before Colaiste Bride got going with some excellent shooting. Aoibhin Dunne had two big threes to go with her opening lay up to give Colaiste Bride an eleven-point lead midway through the quarter. Abbey O’Keefe and Sarah Bulough also chipped in but a lot of fouls particularly while trying to stop the excellent offensive rebounding of Madeleine Duplo of Manor House were a worrying sign. Colaiste Bride led 7- 20 going into the second quarter.

Manor House came storming out in the second. Duplo was excellent inside as was Rachel Allen and Onome Akpotar. They worked hard and got some great looks that they finished. Emily Brady had three three’s in her eleven points this quarter and with thirty seconds to go it was all tied up. Colaiste Bride were getting the same looks they were making in the first but the shots weren’t dropping. Dunne and O’Keefe did get a couple of scores as did Eimear Quinn but the quarter belonged to Manor House, it was 29 – 29 at the half.

The third quarter saw defences tighten up on both sides and scores were hard to come by. Duplo and Emily Payne found the bottom of the basket for Manor house as did O’Keefe and Katie Flanagan for Colaiste Bride. It was 37 – 39 Colaiste Bride going into the fourth.

Manor House battled hard but it was Colaiste Bride who started the brighter, Flanagan and Yusuf got them started before Dunne and O’Keefe found their range. Brady did all she could with five points in the quarter but it wasn’t enough and Manor House won on the scoreline of 53 – 64.