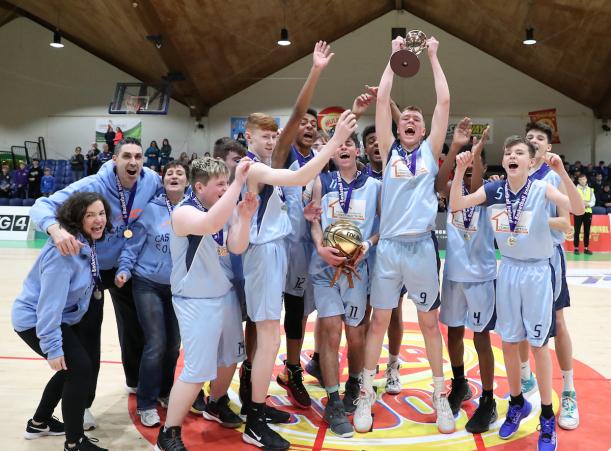 In the final game today in the National Basketball Arena in Tallaght we saw a hotly anticipated contest between Ballymakenny college and Pobailscoil na Trionade, Youghal in the under 19C boy’s final. The game started off very defensively with both teams setting up in zones and limiting scoring opportunities. Pobailscoil na Trionade started the brightest with points from AJ Brophy and Cillian O’Connell. Erik Dvarionas hit a big three pointer for Ballymakenny to end their first half struggles from the field and cut Youghal’s lead to three points 5-8.

The second continued similar to the first with a lot of frantic play from both teams causing a lot of turnovers and missed opportunities. Captain AJ Brophy continued to impress for Youghal adding another three pointer to his tally, while O’Connell added four free throws. Ballymakenny continued to struggle from the field adding two field goals in this quarter to add to their two from the first. However, free throws from Cian Talbot Gaynor ensured they stayed within striking distance going into the break trailing 17-12.

Ballymakenny came out swinging in the third with a number of big plays. Nathan Parris stated the scoring with a nice lay-up to start the third. Continued scoring from Brophy and O’Connell helped keep Youghal in the lead but it was two big three-pointers from Dylan Jones and Kingsley Akinbode that helped Ballymakenny cut the lead to three points 25-22.

The fourth started close with Nathan Parris hitting another three pointer for Ballymackenny but even Parris adding another three was not enough for Ballymakenny to get back into this game with captain AJ Brophy continuing to show his class adding another five points including a big three pointer to finish the game and claim the MVP and more importantly the cup for Pobailscoil na Trionade, Youghal. It finished 32-37.

In this all Limerick affair, both teams got off to a fast start. Kiera Shyne opened the scoring for Castletroy before Saoirse McCarthy hit two free throws to get Hazelwood off the mark. Sorcha Cronin had five points with Shyne getting another elbow jumper to bring Castletroy to eleven points for the quarter. Hannah Cremin made her free throws when on the line before the Fahy sisters, Keelan and Niamh contributed as well to give Hazelwood a one-point lead 11-12 going into the second.

Castletroy started the brighter with Emma O’Sullivan finding her range on the way to 6 points in this quarter. Shyne was a threat the whole time in transition with Azeezat Muniru getting on the scoreboard. Limiting the second attempts held Hazelwood to just eight points with Cremin, McCarthy and Niamh Fahy the scorers. Castletroy lead 23-20 at the half.

The third quarter saw Hazelwood flip the script, Niamh Fahy had seven points with Cremin and Meabh Magner scoring in the lane as well to erase the deficit and push Hazelwood in front. O’Sullivan and Cronin kept the scoreboard ticking but the writing was on the wall for Castletroy. It was 33-37 going into the last quarter.

Hazelwood came out as they finished the third, Cremin was unstoppable on her way to a game high of twenty-one points and Castletroy had no answer to her. Shyne and Nofeesat Muniru did find they basket but it was not enough to stop Hazelwood College taking the win 38-52.

Ruairi Cronin lead Castletroy College to the Cup and League Double today with a stellar forty-six point performance. St Aidans did a good job in the first quarter of finding ways to attack Castletroy’s zone defence. Paul Ryan and Darragh McGowran were to the fore with a combined nine points for St Aidans but it was Cronin with thirteen that led all scorers and it was 15-12 to Castletroy going into the second.

Cronin carried on where he left off and Castletroy’s defence went up a notch and forced turnovers. Ryan Mullane Ndu and Ciaran Coulter hit a couple of nice shots but Cronin carried the offensive load with fourteen. Dakota Callally had a big three and Ryan had five points but that was all St Aidans could manage and it was 36-20 at the half.

A big third quarter was needed from St Aidans and they upped their game on both ends of the court, Ryan got some blocks and they forced Cronin to come inside more, while he still had ten points, that was all Castletroy managed in their lowest scoring quarter. McGowran had a another big three and Ryan went to work inside and from the free throw line with six points in a row before Callally had two big threes and the deficit was cut to 46-37 going into the fourth.

Castletroy refocused their defence and held St Aidans to just seven points with Callally, Ryan and Sam Cummins getting their scores. Cronin had nine points to bring his total to forty-six. And Castletroy achieved the double of cup and league on the scoreline of 59-44.