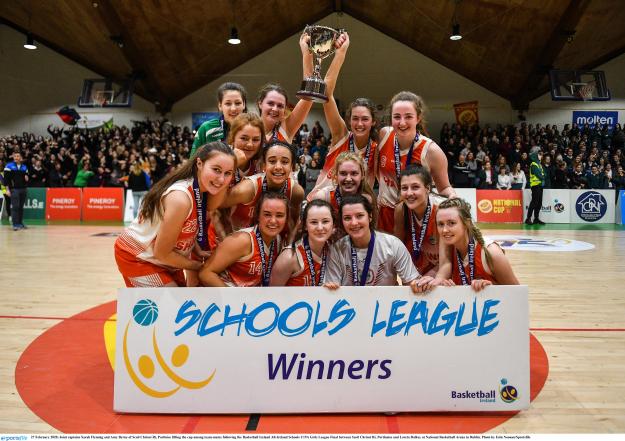 An exciting U16 A final was expected and it didn’t disappoint! Scoil Mhuire Gan Smal shaded the first half with a one point lead going into the third quarter but an Emma Tolan inspired Virginia College fought back and held on in the end for a one point win in the closest game of the week.

Michelle Ugwah had seven points with Issey McSweeney having five to give Scoil Mhuire Gan Smal a three point lead after the first. For Virginia College it was Niamh and Emma Tolan with Ciara Brady who scored their nine points, 12-9.

A second quarter that saw both defences tighten up left it 16-15 at the half.

Emma Tolan showed her versatility as Virginia fought back and took a three point lead into the fourth. It was all set for an exciting finish and so it proved, Virginia couldn’t pull away despite the best efforts of Niamh Tolan and Aisling Doughty as Scoil Mhuire’s Saoirse Breen and McSweeney hit big shots to keep the gap to minimum. It finished 42-43.

Skibbereen Community School completed the league and cup double with a comprehensive win over De La Salle Churchtown. They didn’t have it all their own way as after an opening quarter that they dominated, De La Salle came back into the game just after half time. MVP Eividas Andrekius had nine points in the opening quarter and DLS had no answer to his ability to get in the lane or close out on this three point attempts, it was 5-21 at the end of the first. A much better second quarter for De La Salle saw Alejandro Rodriguez get to the rim and finish as well show his range on the way to seven points and he was ably assisted by Joshua Esguerra and Miguel Hurtado as they cut the deficit to just seven points at the half, 19-26. Rodriguez picked up his fourth and fifth fouls midway through the third and Skibbereen powered on afterwards. Andrekius added four three’s to his tally and with Stevie Redmond and Colm Harrington seemly able to score at will it was 29-49 going into the fourth. Andrekius knocked down a couple more threes on his way to 28 points. It finished 33-60 and the Skibbereen faithful were cheering as their team completed the double.

2020 has been amazing for Portlaoise basketball, and today another chapter was added to the success story as Scoil Chriost Ri added the U19A All Ireland Schools League title to the U19A Cup title they won last month. For many of the Chriost Ri squad this was their fourth major medal of 2020, as they were also involved in the Portlaoise Panthers U18 and Division One Hula Hoops Cup double.

Coming into the game expectations were high for the midlands team but they didn’t get it all their own way in a packed National Basketball Arena. With over 600 hundred students cheering and singing the atmosphere in the Arena lent itself to a brilliant occasion. Loreto Abbey Dalkey showed they were not there to simply enjoy the occasion as they got excellent early scores through Allyce Maylnn and Aisling Marmion. Scoil Chriost Ri were turning the ball over more than usual but they were also doing enough scoring with Ciara Byrne and Rebecca Reddin contributing well in the first quarter to give them a 14-11.

In the second quarter and third quarters the defensive pressure from Chriost Ri was starting to pay off as they forced turnovers and didn’t allow Dalkey to reach double digits in either quarter. With Sarah Fleming impressing offensively, alongside Shauna Dooley on the inside, it was a 46-29 lead for the Portlaoise women heading into the final quarter.

Despite the deficit the Loreto Abbey fans kept singing and supporting and they were rewarded with some excellent scores, by Lara McNichols in particular, in the final quarter. Ultimately it wasn’t to be for the Dubliners though as Scoil Chriost Ri completed an impressive U19A double. MVP on the day for the winners was Sarah Fleming who top scored with 14 points.