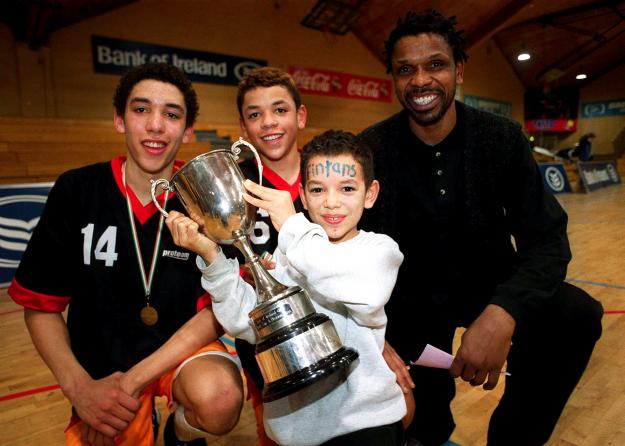 We head down memory lane with Brendan Moran of Sportsfile today as he walks us through some of his favourite basketball photos that he has taken over the years.

Brendan has been photographing basketball in Ireland since 1990, first as a keen amateur and, since 1994, as a professional with Sportsfile photo agency. His love of basketball stems from seeing Tralee Tigers playing in the Sports Complex in the late 1980’s and he still tries to catch a game anytime he is in hometown of Tralee. A veteran of covering many sports including events such as All-Ireland finals, World Cups and Olympic Games, Brendan talks us through some of his favourite basketball photos below. 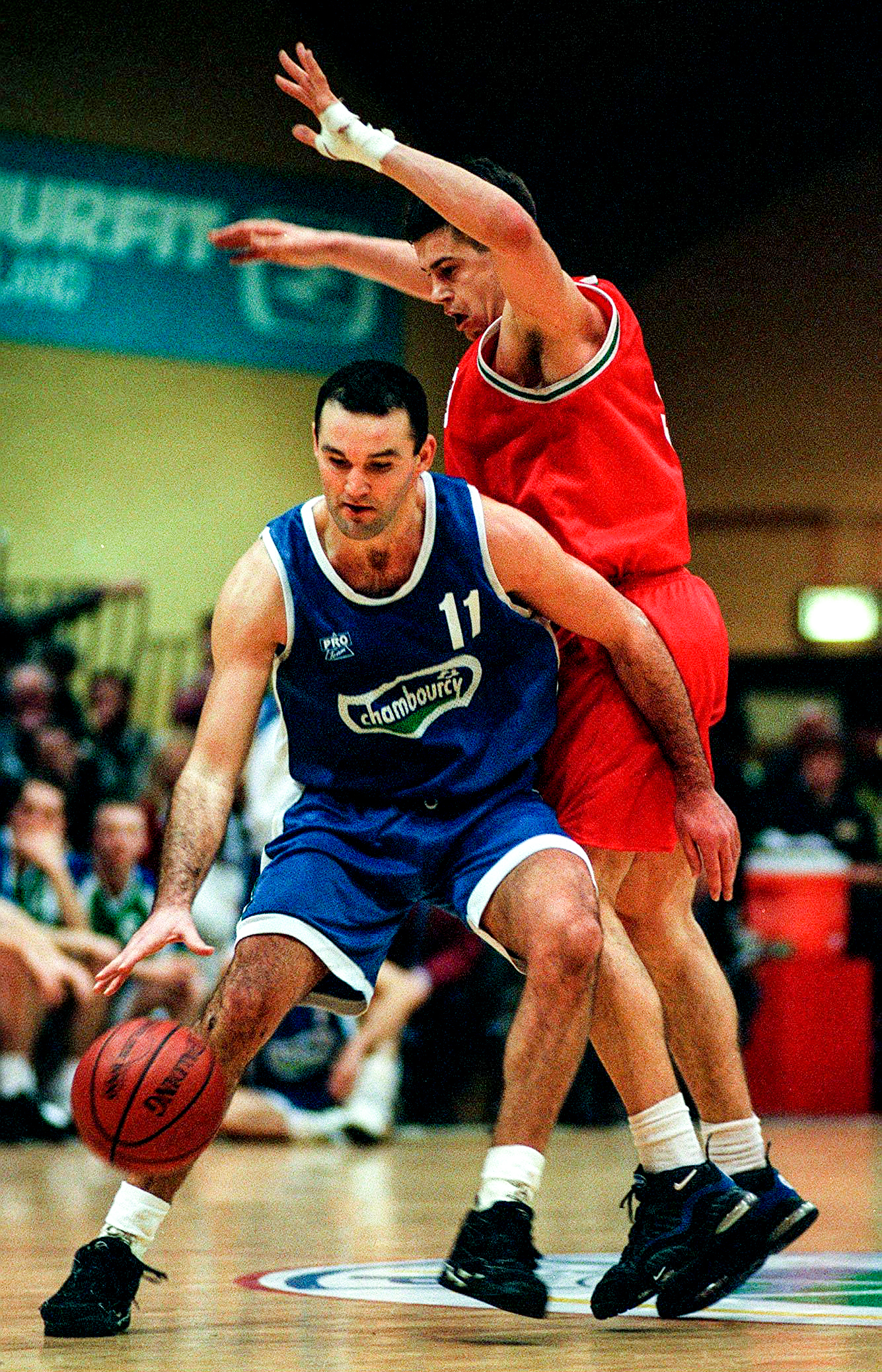 January 1996; Liam McHale and Gareth Maguire in action at the 1996 Cup final

I didn’t ‘invent’ basketball photography in Ireland. That honour would probably go to the late Jim O’Kelly and Ray McManus, who founded Sportsfile around 1980. Ray and Jim covered basketball at the time, supplying photos to the IBBA magazine, photographing the likes of Mario Elie, and Kelvin Troy, as well as the Meteors, Burgerland Neptune and Lee Strand Tralee teams. Jim himself used to play for Corinthians around that time and went to photograph games when not playing. When I joined Sportsfile in 1994, it was great to see that they covered basketball and Ray was trusting enough to let me cover the 1995 Cup finals for Sportsfile. Seeing the likes of Liam McHale of Ballina and Gareth Maguire of  Star come up against each other was a treat. McHale won that Cup final in 1996 and went on to win a GAA Football All-Star that year for Mayo. Everything was manual focus in those days so it was a lot harder to photograph basketball and the lighting in the gyms, along with the quality of the film, made it a tough gig, so we were probably one of the few, if not the only, photographers to cover basketball for a long time. But that made it all the better when you got a good shot. You shot your film and went back to the office to see what you had, hoping you had good shots of the key players. Now with the modern camera, it’s easy to shoot loads of pictures, but the skill is still getting the best photos. It’s just a different challenge. 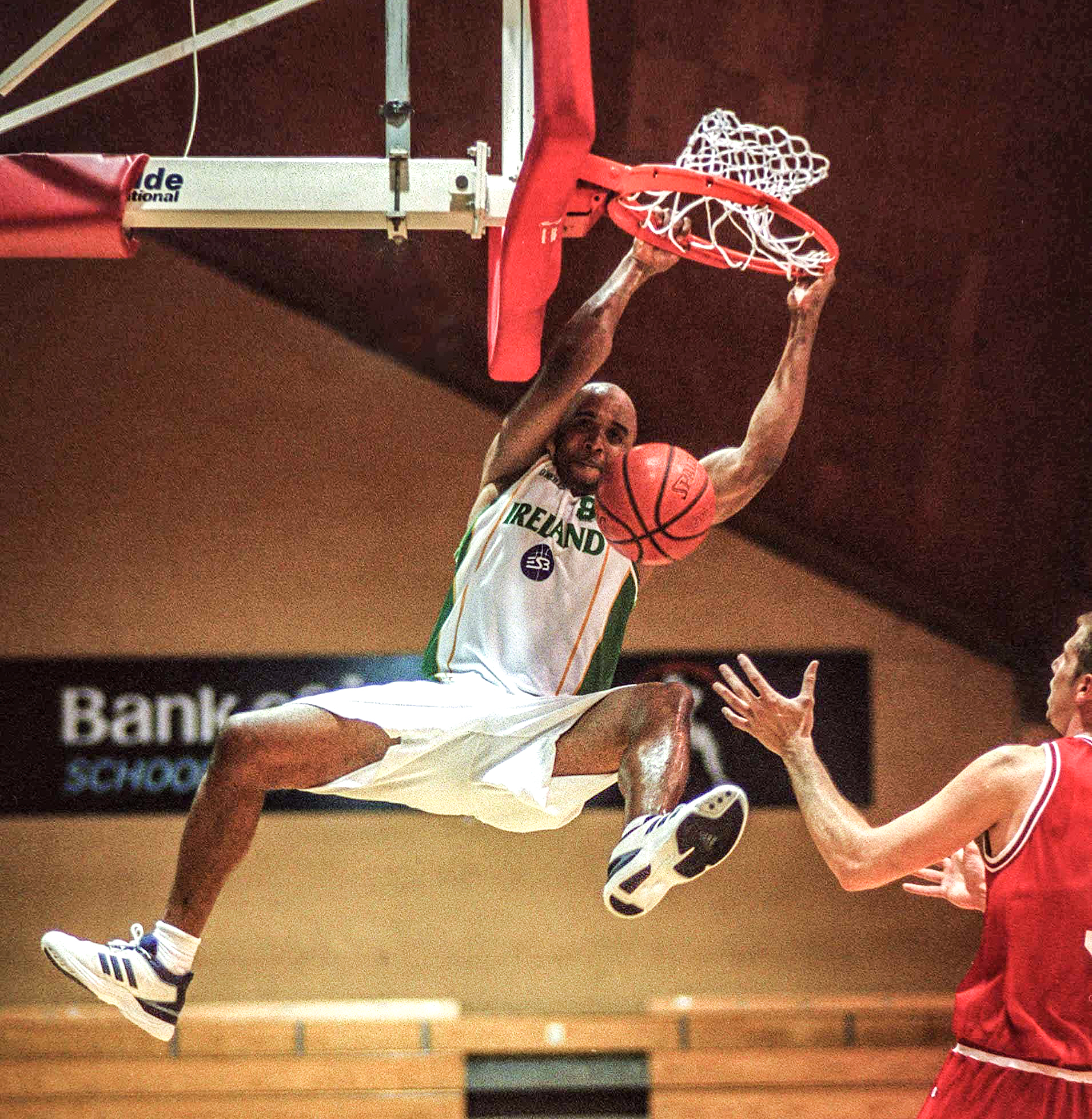 August 2001; Mike Mitchell of Ireland dunking the ball against Switzerland during their European Championship Qualifier.

Around the early part of the 2000’s, the Ireland national men’s team were playing with some serious players, notably Marty Conlon (2001-6) who had played with many NBA teams, including the Kings, Celtics, Heat and the Clippers, Pat Burke (2004-6) of the Orlando Magic and the Phoenix Suns, Jay Larranaga, Adrian Fulton, Dan Callahan, Cal Bowdler and Billy Donlon. So it was exciting to see NBA players playing in and for Ireland. Generally a dunk photo is the “shot” at a basketball game – it looks spectacular but it happens so rarely. So to get a good dunk photo has always been a challenge and of all the ones I have seen, this one is probably the one that looked the best from my point of view. Hopefully with the men’s European Championships for Small Countries being held in Limerick, we can look forward to more International basketball in Ireland again following on from the women’s national team’s very successful hosting of the same championships for women in Cork in 2018 and of course, the U18 women’s success in 2017 in Dublin. 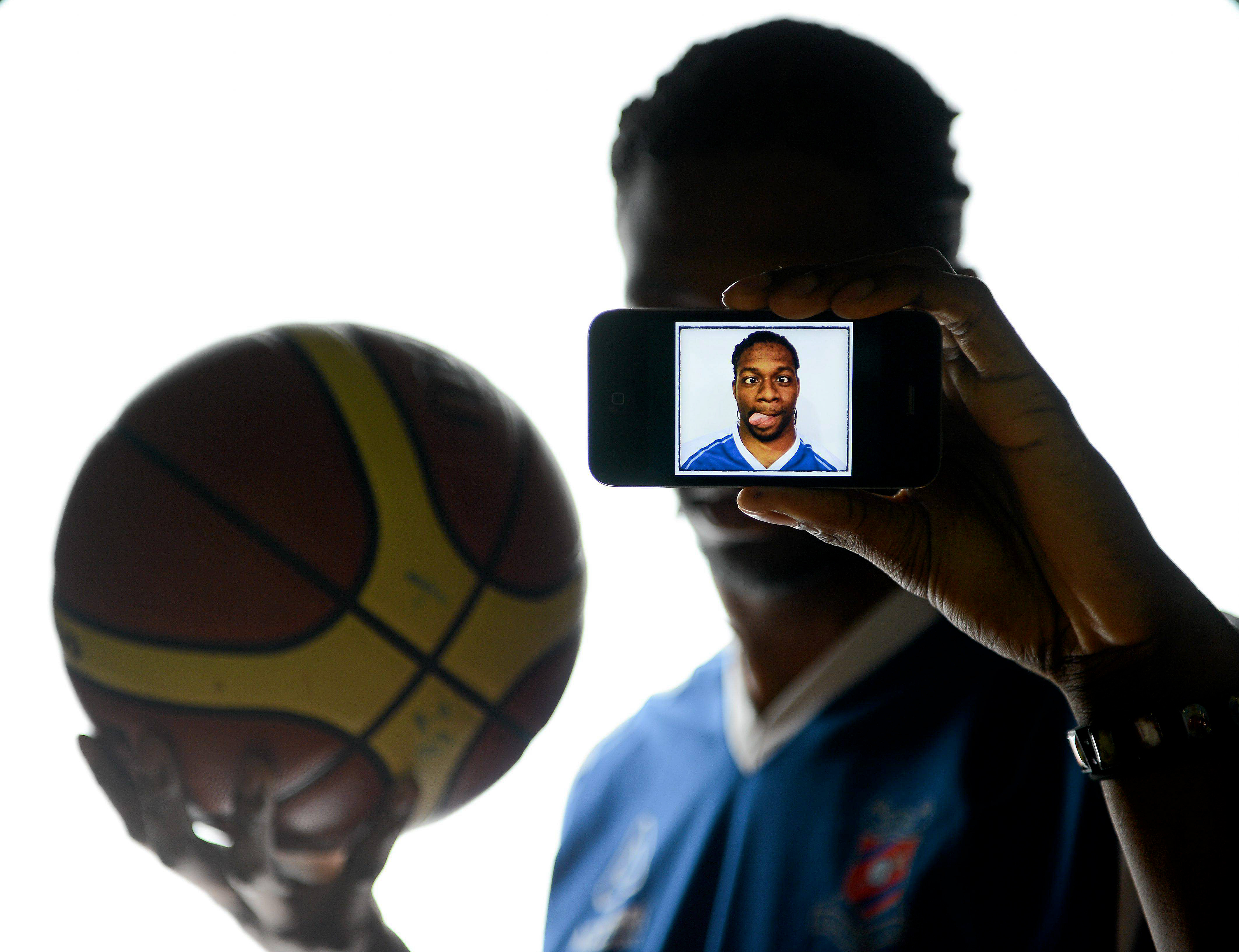 September 2012; Darren Townes of Neptune photographed ahead of the 2012/13 season.

Domestic season launches are what gets the ball rolling after the summer break. Generally they are busy days for us, having to capture content for the whole season in a couple of hours. But there is always huge buy-in from the players on the day. Some players are introverted but most of the players are extroverts by nature and that always helps when shooting portraits as they can come up with poses faster than we can take them! For this photo, Darren had no problem getting involved and collaborating and was a brilliant subject. Rather than smiling into the camera like a regular portrait, I took his photo on the phone first and then reshot the original portrait with Darren holding the phone in his hand like a mask. The photo won an award in the portrait category of the Press Photographers of Ireland awards for that year. 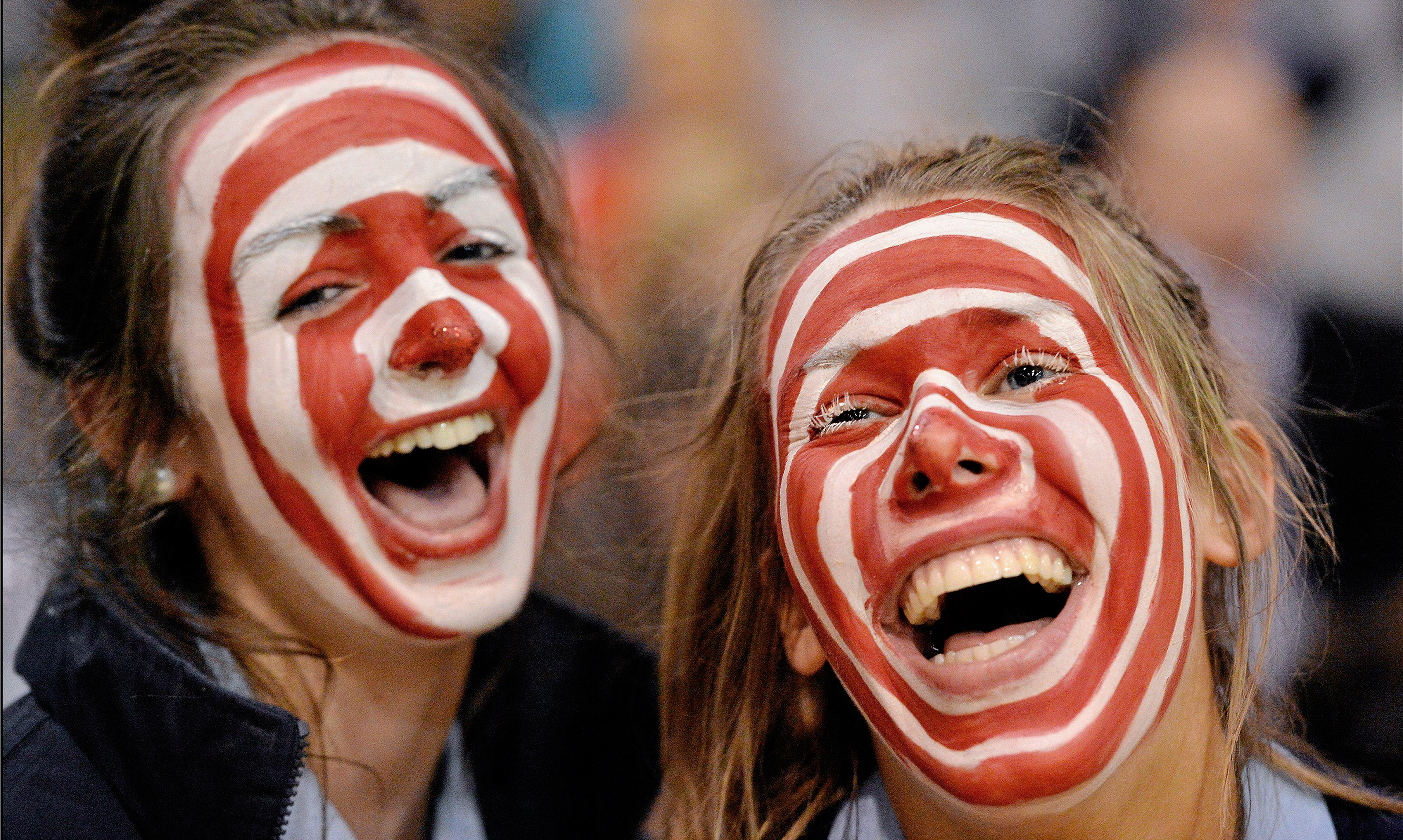 Schools basketball finals are always great and colourful days, well great except for the noise!!!! While we always cover the games themselves, we are also always on the lookout for colourful supporters as they can often make nice human interest photos and give us options to make the back or front page of the national newspapers. These two students from Holy Faith in Clontarf stood out and while posing for a photo looking into the camera, the giddiness in them surfaced and made the photo a much better photo than them just looking at the camera. Their face paint went to such lengths that Michelle, on the right, had her eyelashes painted white! The smiles and joy in the photo are infectious and I love that it is such a happy photograph. 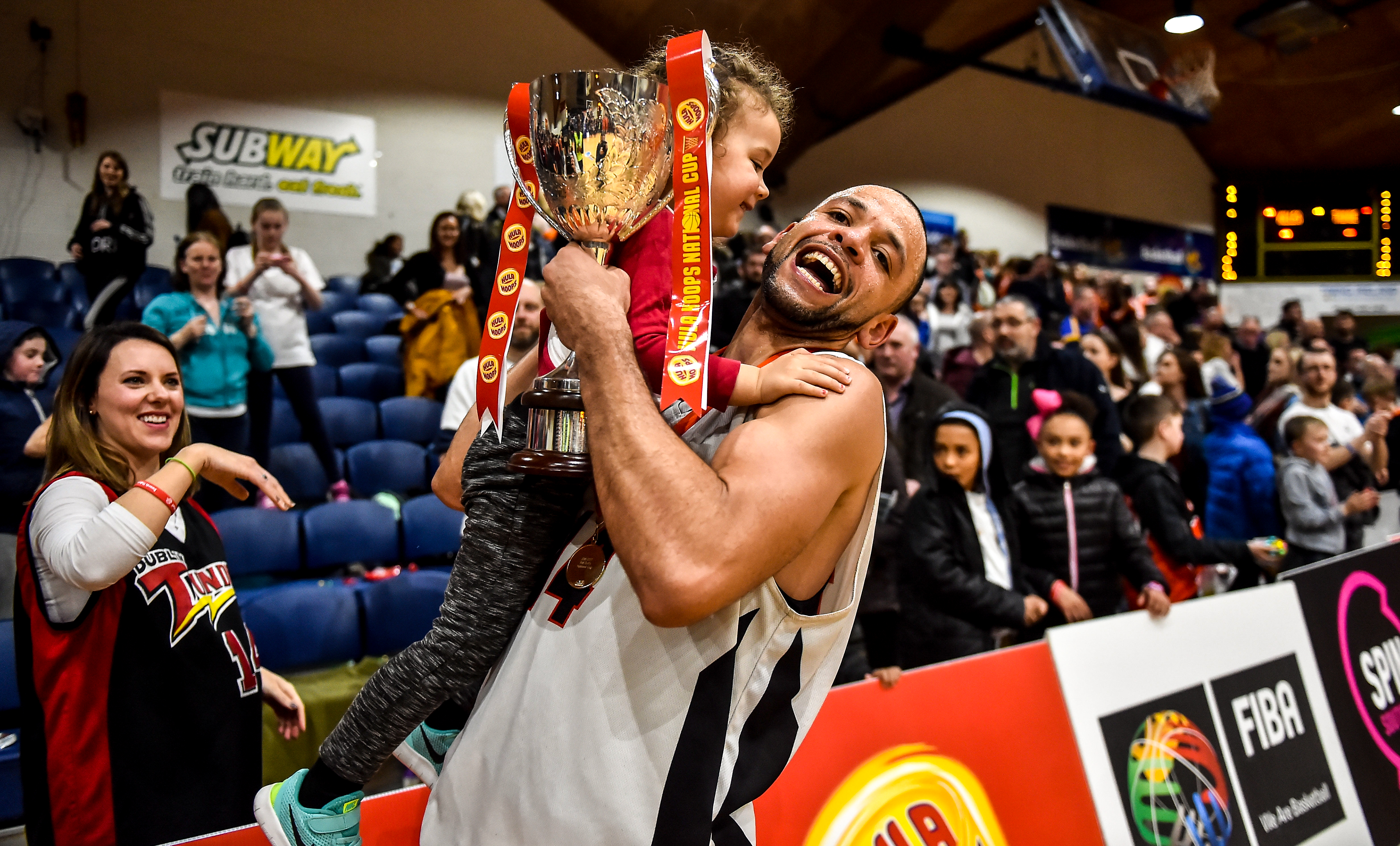 Basketball in Ireland is a hugely family orientated sport, the McHales, the Grennells, the Dwyers, the Randolphs, the Coughlans, etc. Jerome Westbrooks is in Ireland 38 years and between playing and coaching basketball, he is one of the iconic figures of Irish basketball. Nothing was ever too much trouble to the man in my experience. Any time I ever asked a team of his for a team photo, he would always line them up straight away, making sure everyone looked the part. He has passed that love of basketball down to his kids, and I’ve no doubt Isaac has passed it down another generation to his daughter Eabha. Like his father, family man first, baller second. Sharing your memories with your kids is one of the most important things in anyone’s life. How many times in life do you say, “ah, do you remember when …”. 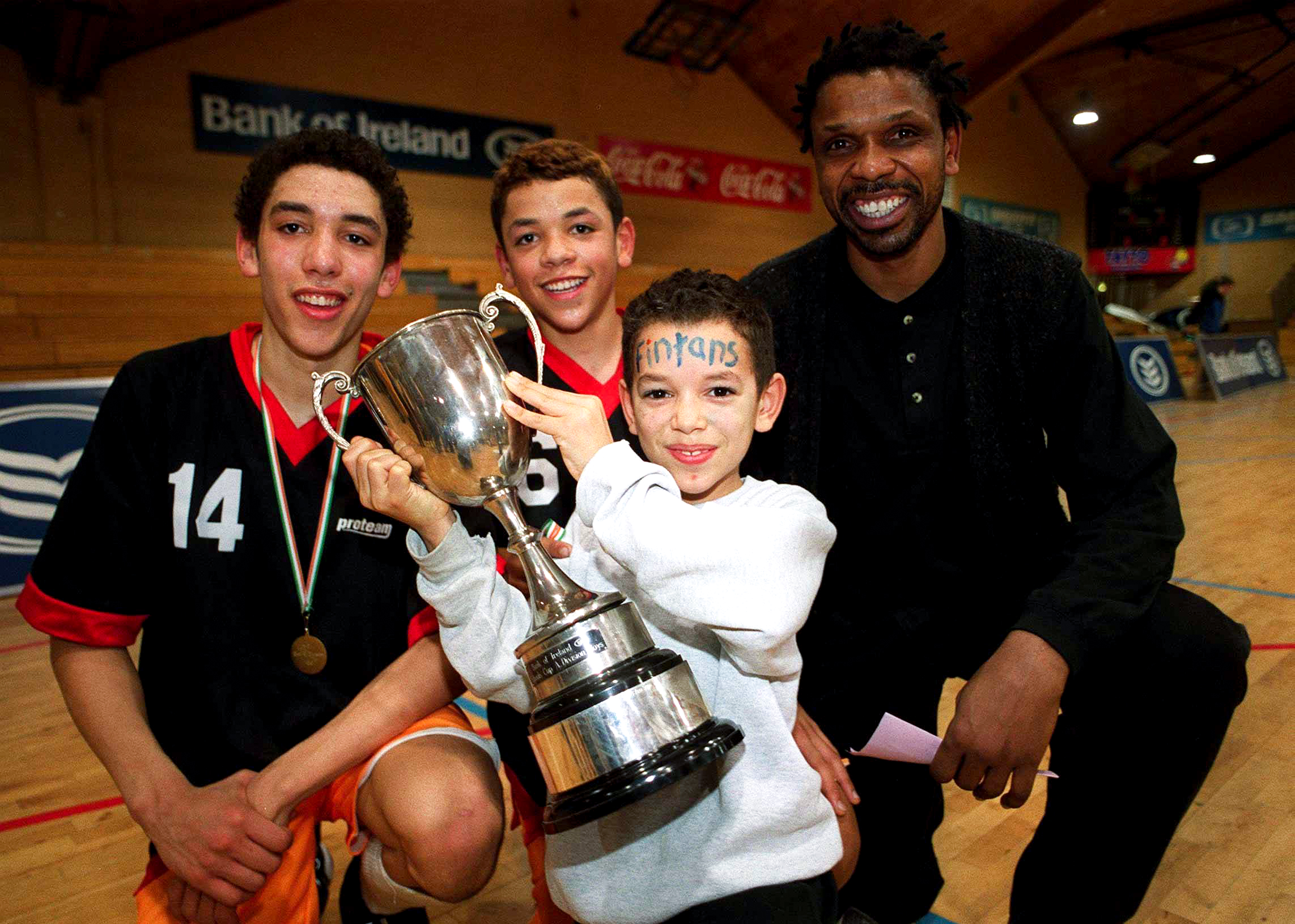 So I love photographing players celebrating with their children, hoping some day they look back on the photo and ‘remember when’ and all their good memories come flooding back, how they felt at that moment in time 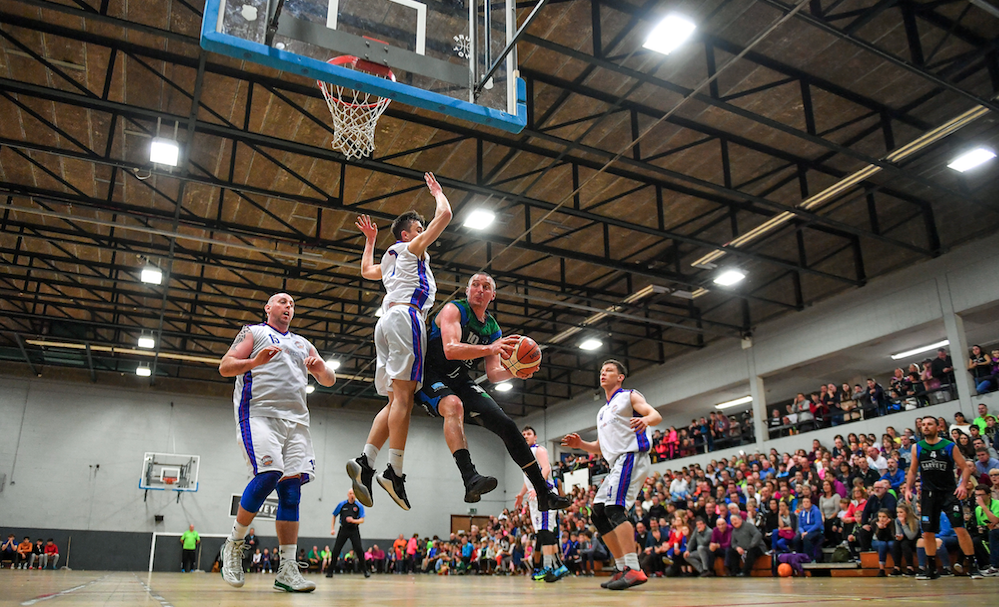 October 2017; A packed house in Tralee as Kieran Donaghy of Garvey's Tralee Warriors goes for a layup against Aidan Dunne of Eanna.

What can I say about Tralee. A hotspot of basketball as long as I have known it. I first went to photograph basketball in the Tralee Sports Complex as a teenager around 1989/1990. Basketball was huge and the place was packed, just like it is now with the Garvey’s Warriors Tralee team. Players like Sammy the Turk, Gerald Kennedy, Joe Quirke, Mervyn Griffin used to pack the place out, and be local celebrities! Every weekend when they were at home around that time, I would cover a game for The Kingdom newspaper. Both Tralee and Killarney had teams around then and Killorglin now have one as well. So when I go back now, it brings back great memories. It’s one of the venues that is packed out for every game nowadays and a lot of that is down to the volunteers in the club like Terry O’Brien, Jimmy Diggins, Kieran Donaghy, Kevin O’Donoghue, Pop Lynch and many more, who work hard in getting the local community and local sponsors to support them. While I don’t cover as many games as I’d like to, there is always a smiling face and a handshake or a nod when I go back down. That means something. Basketball people are great people, they don’t look for the limelight, but want to help their community and young kids, be that in Tralee, or in Belfast, Limerick, Gurranabraher or Killester. It’s more than a game in a lot of places. 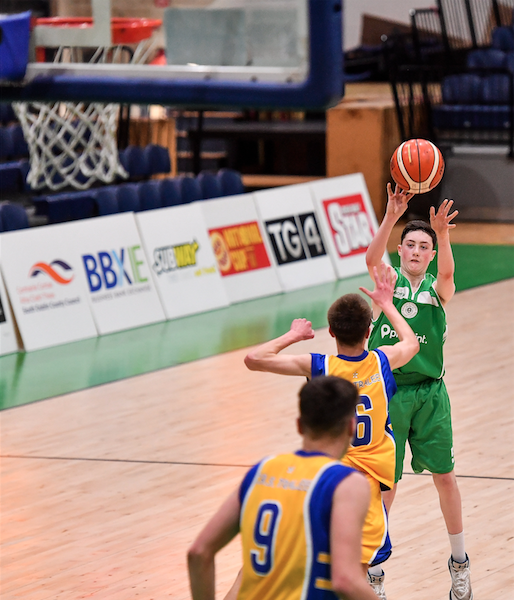 Cj had 33 points and 11 three’s in the first half alone against Tralee CBS in the All-Ireland U16 A Schools final that day. Having covered schools basketball since the 90’s, I’ve seen a lot of players come through: Susan Moran, considered the greatest Irish women’s player ever, Grainne and Niamh Dwyer, Michael and Isaac Westbrooks, Kate Maher, Scott Kinevane and Rachel Clancy to name but a few, but this was the standout performance for me over all those years. It was hugely entertaining to witness such a performance and no doubt he will follow in his father’s footsteps and play senior for Ireland one day. 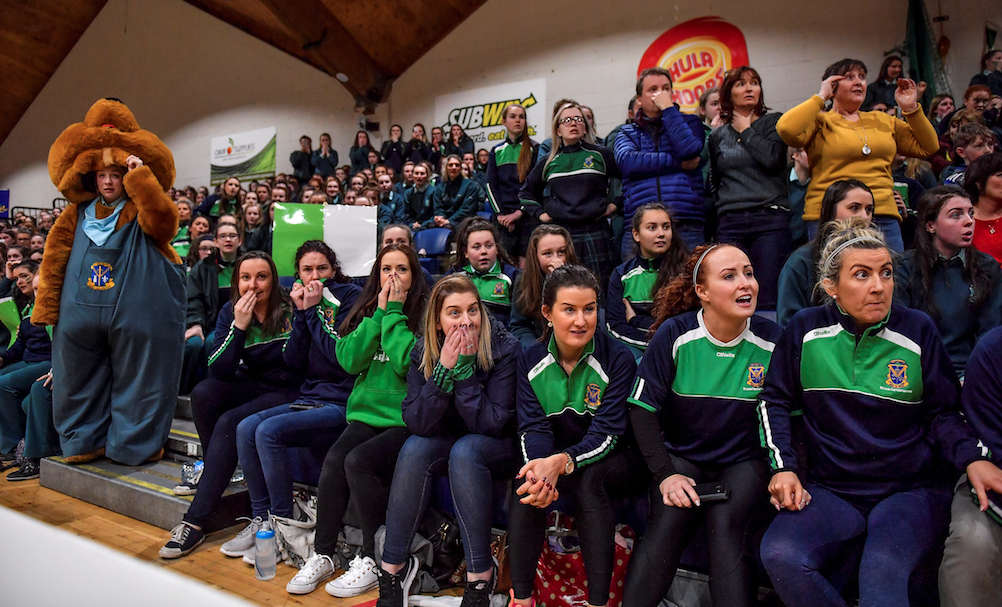 January 2019; Tense! School fans on the edge of their seats!

Another schools basketball game. Another “away from the action” photo! This time, not filled with happiness, but with tension, and it’s the tension in the faces that I love about it. The game ended 39-37 to St Louis of Carrickmacross and was decided by two free throws for Carrickmacross, for a two-point win. The actual free throws themselves don’t necessarily make for good photos, so I just turned around to their supporters and parents and watched them for a few brief moments as I would have time to turn back to the court for the restart of the game. They are just so enthralled with what is happening on the court that they don’t even notice me, which is great as a photographer as their reactions are purely natural. The mascot can do no more, the time is almost up, she and the parents and supporters can only look on and hope their side come out on top. And we can just see it all in their faces. It could be one of those ‘what happened next’ moments 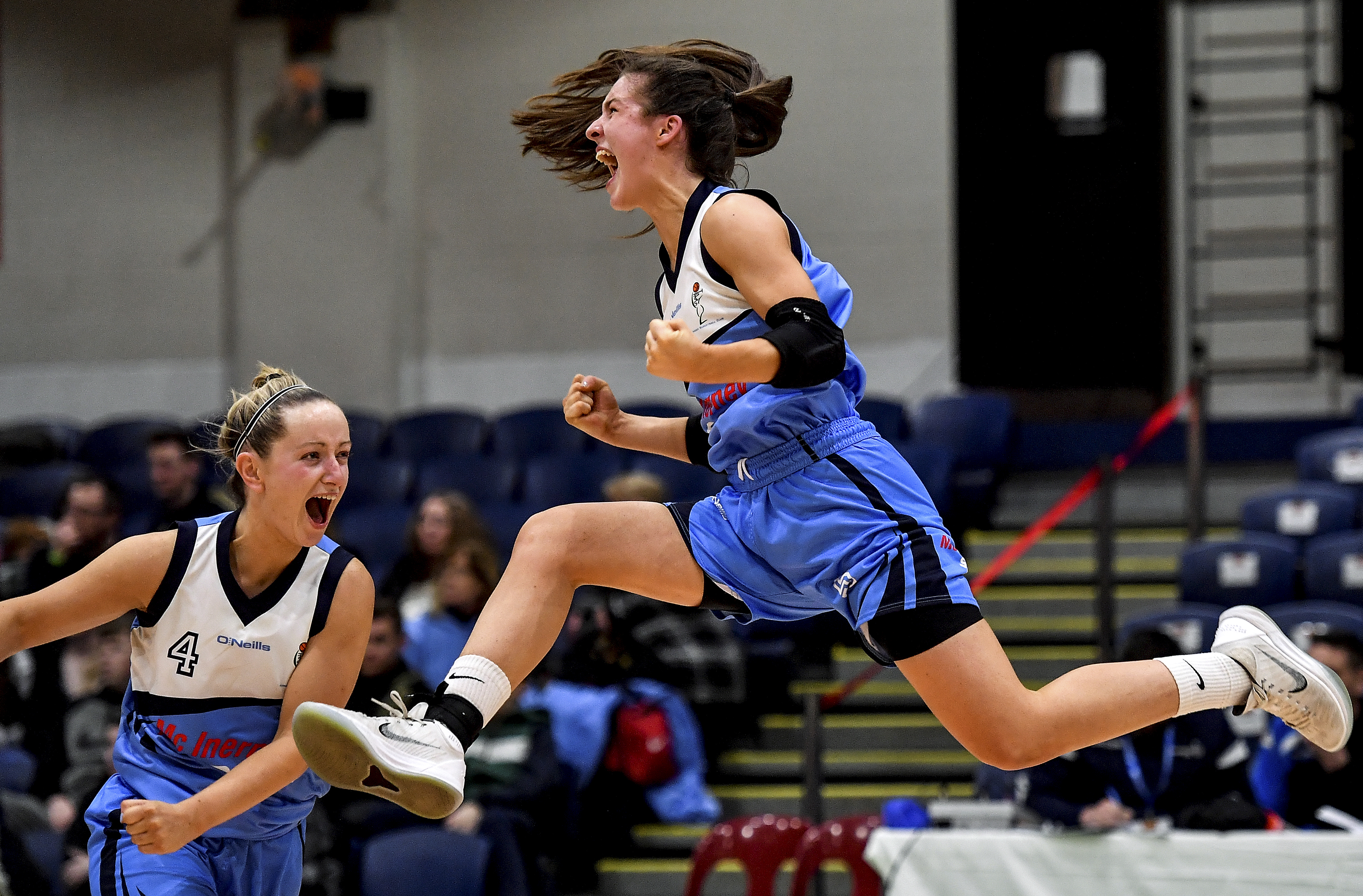 Apart from the action, getting a good celebration photo in basketball is hugely rewarding, but it rarely lasts long as the players generally celebrate amongst themselves in a huddle. So you’ve only got two or three seconds to capture a good celebration photo at the final buzzer - if you hesitate, it’s gone forever. I didn’t really know much about Dayna Finn at the time, but in this game against Ulster University Elks in the Women’s Division One Cup final, she stood out, scoring 29 points along with 14 rebounds and 6 assists. And the fact that she did all that playing alongside Claire Rockall and Fiona Scally, great players in their own right, was pretty impressive! She has represented Ireland at all underage levels and won silver and bronze with the Ireland U18 and U20 teams respecitvely, part of those two history making teams to earn promotion to Division A. She also plays ladies football for Mayo at midfield, so I think she’ll be hugely influential in Irish sport in years to come, hence it’s great having a nice photo of her from her early career. 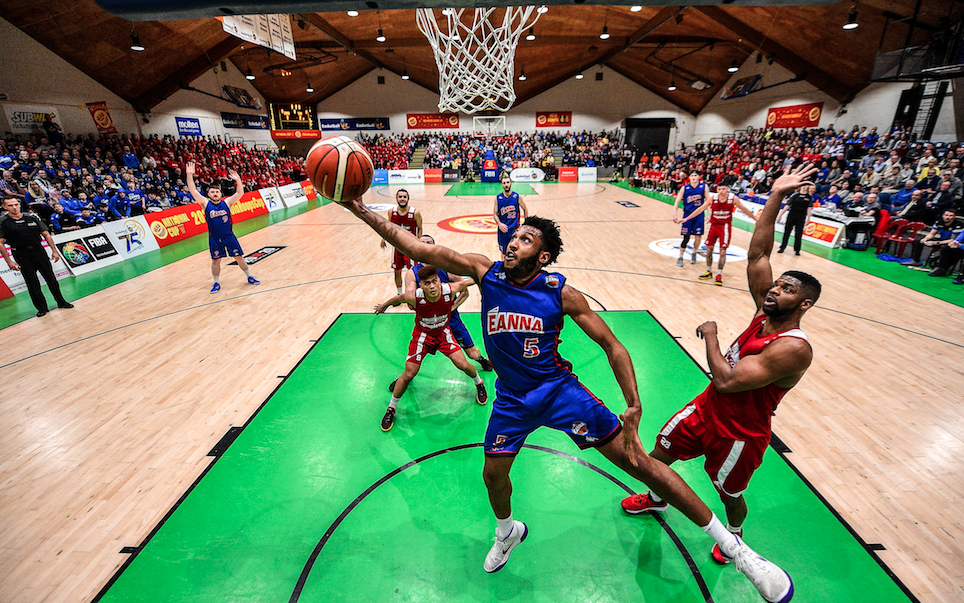 At Sportsfile we are always trying to find new angles and new ways to showcase the sports we cover. I tried this photo angle in 2000 but the technology has come a long  way since then. Safety is always paramount, and this camera was secured under the basket and tied with safety cables and triggered remotely from where I sat courtside. Sometimes, this angle works and sometimes it doesn’t. Like a lot of sports photos, you have to speculate. But I like this photo of Joshua Wilson of DBS Eanna going up for a layup during the Hula Hoops Pat Duffy National Cup Final earlier this year. An unusual perspective and with the players being close enough to the camera, it fills the frame with plenty of action. Everyone’s eyes on the ball and a full house helps to give it a ‘big game’ feel also.

And here are just a few more highlights: 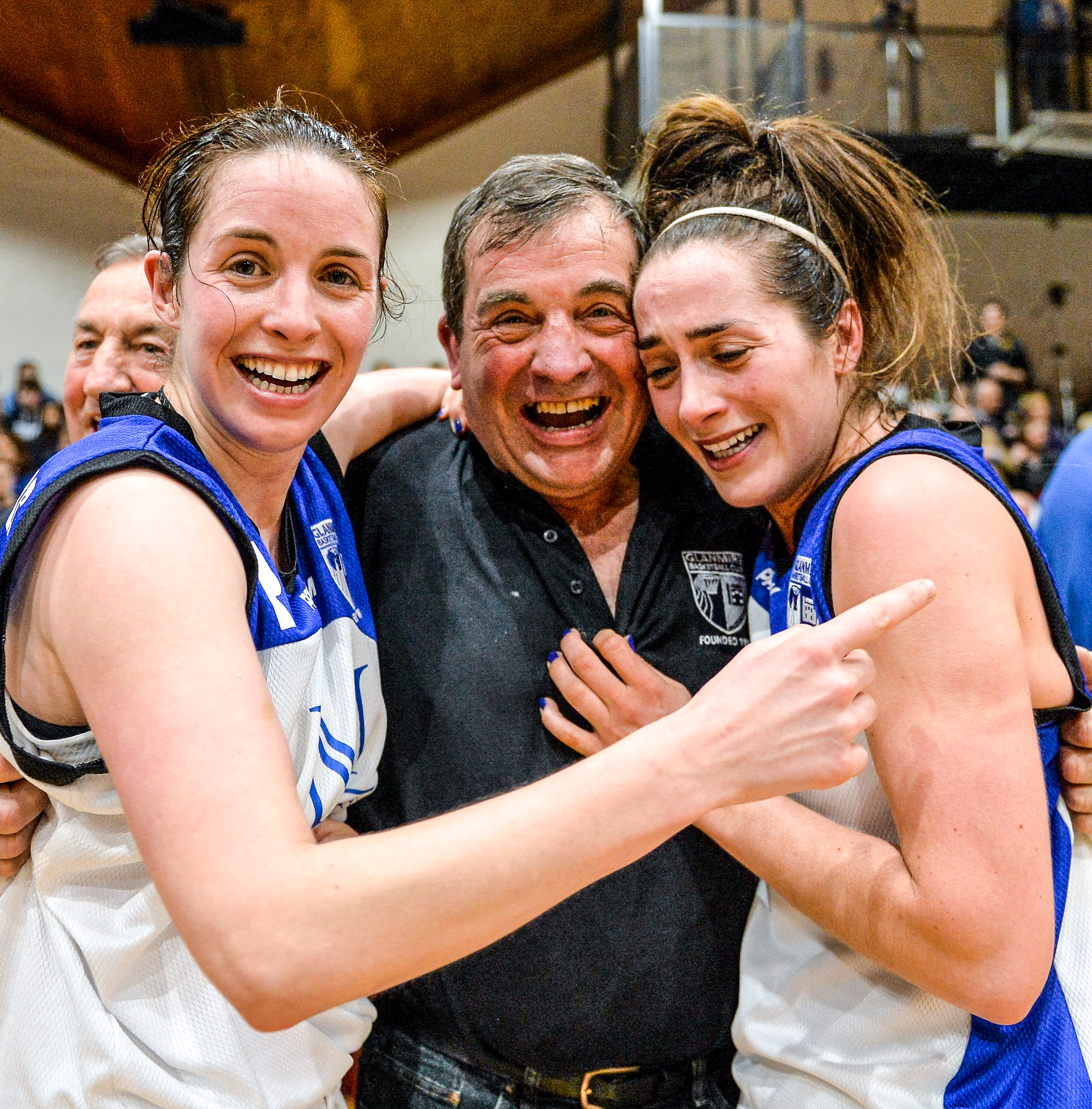 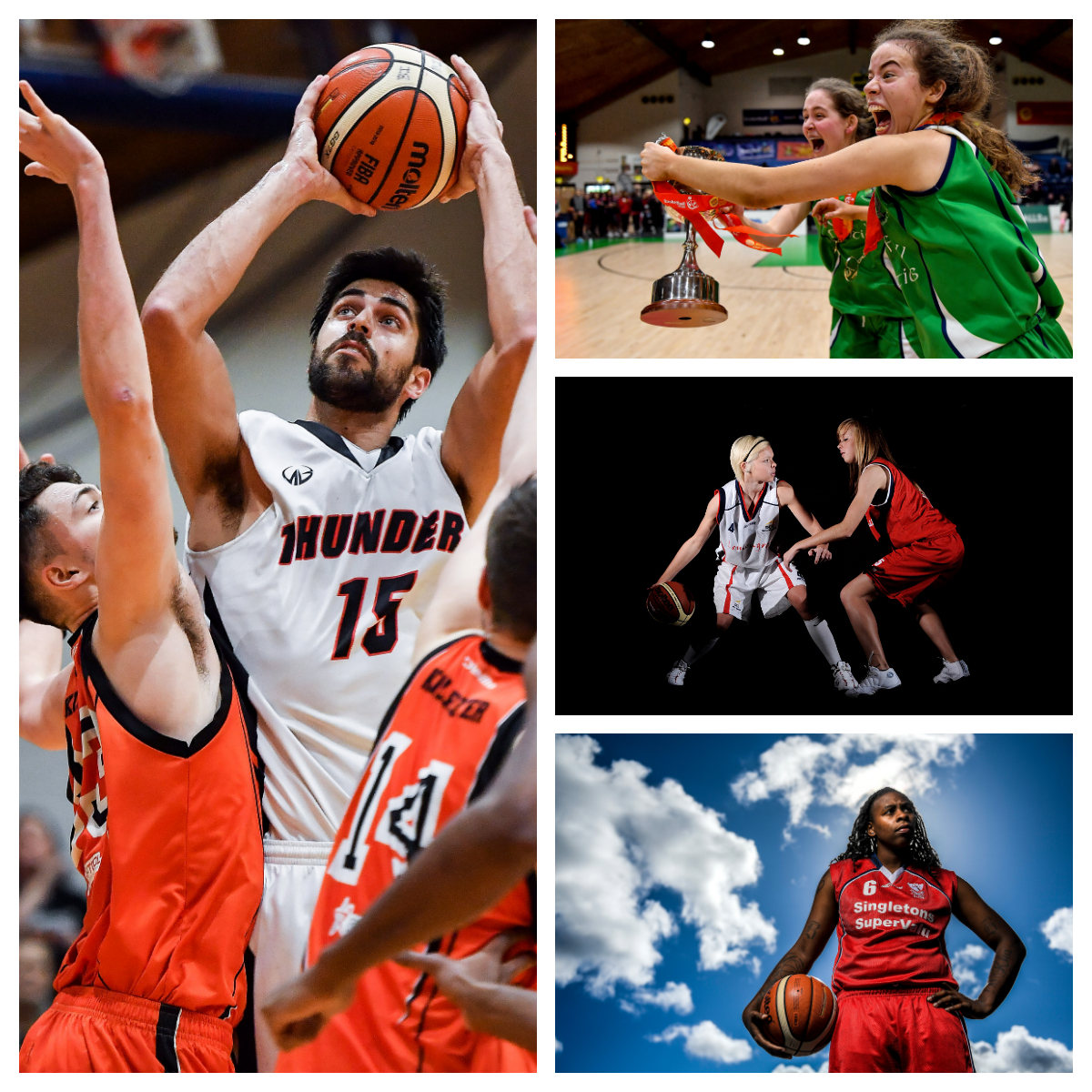 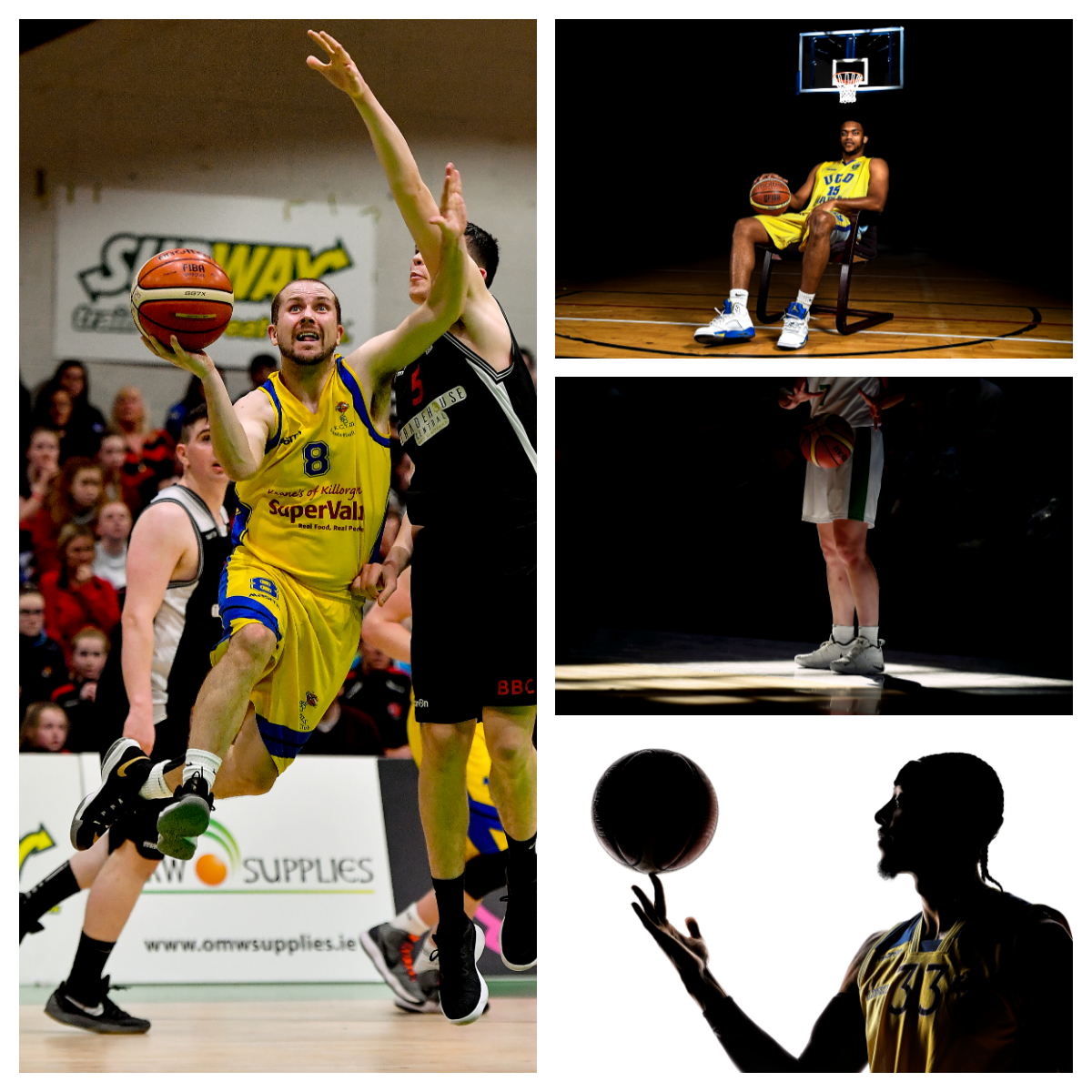 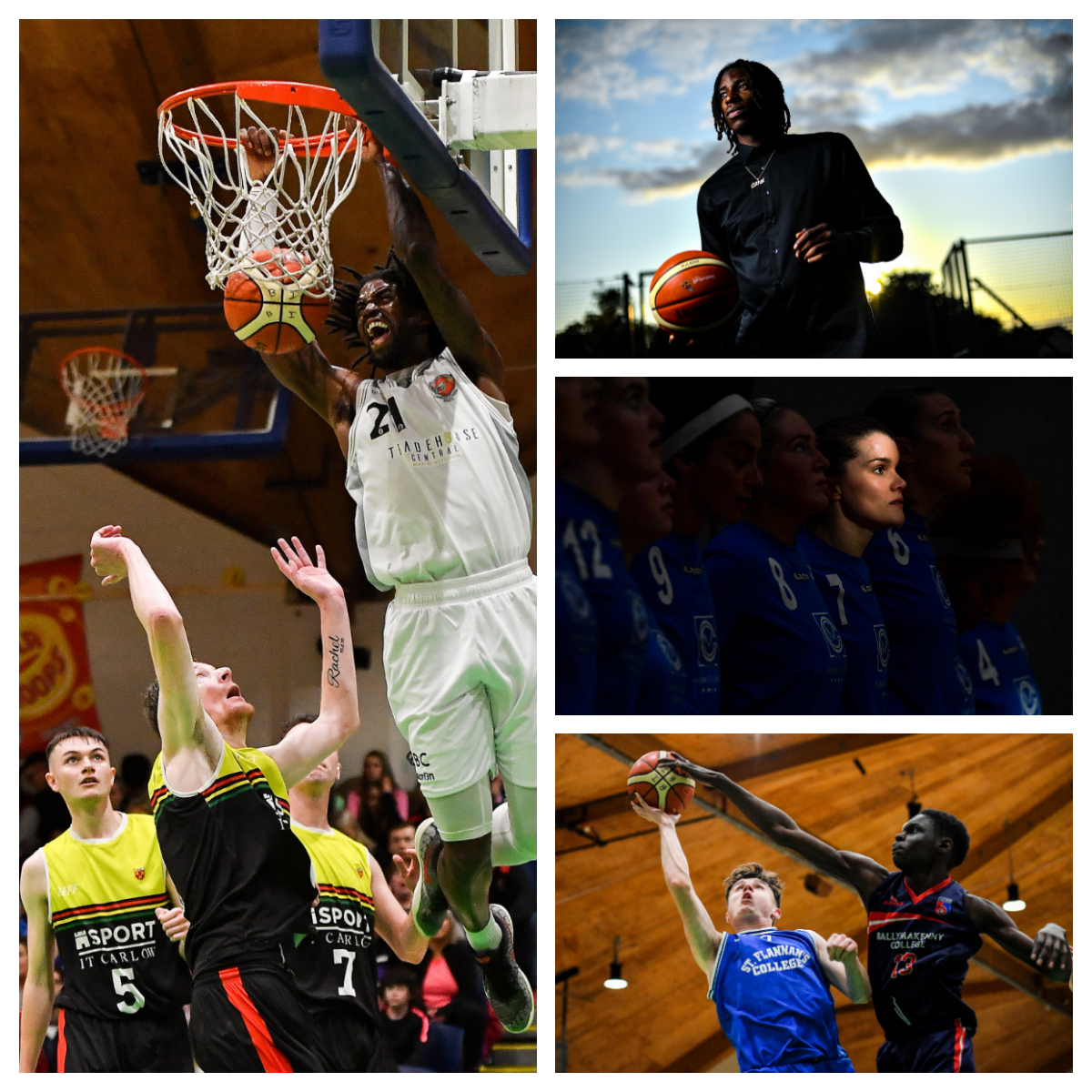 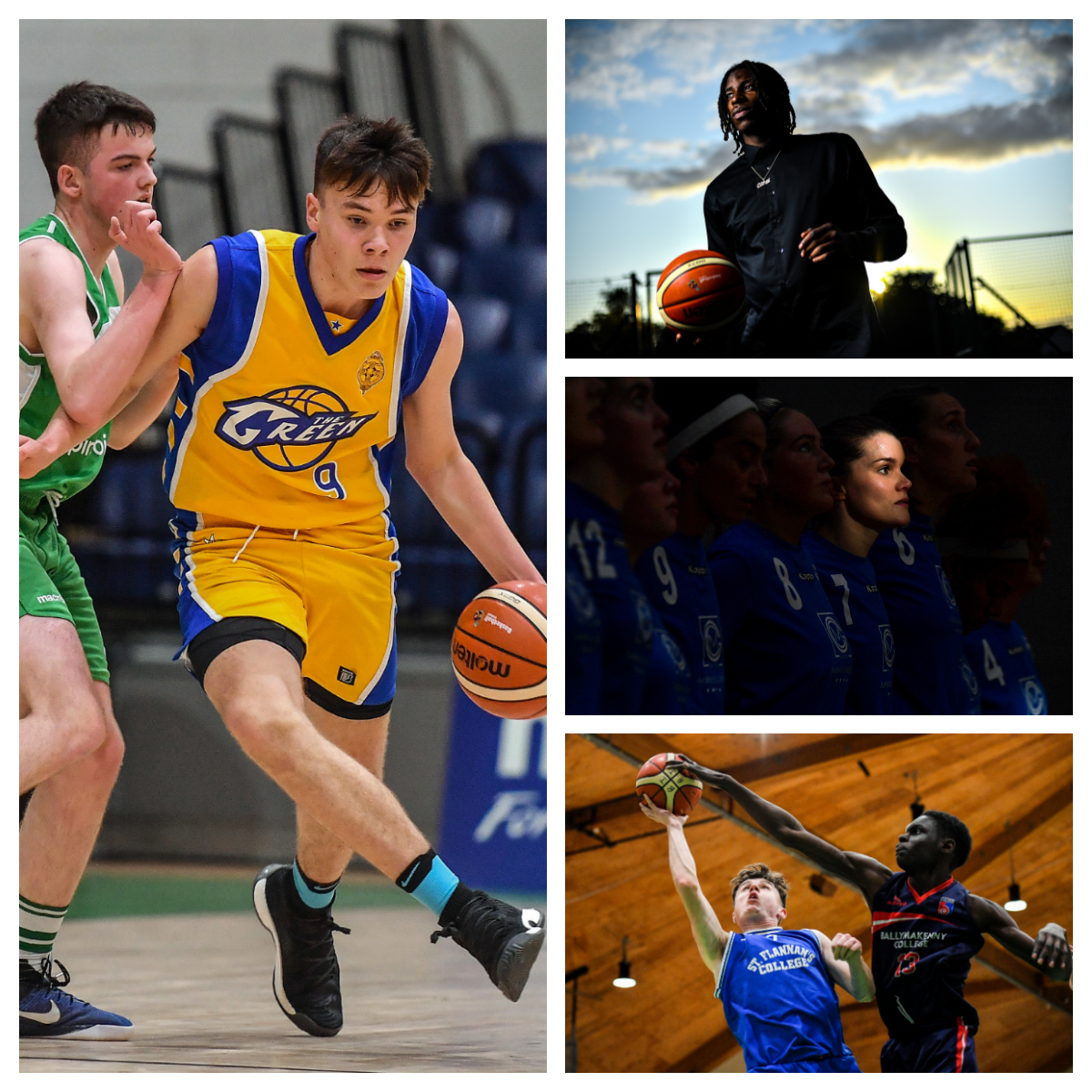 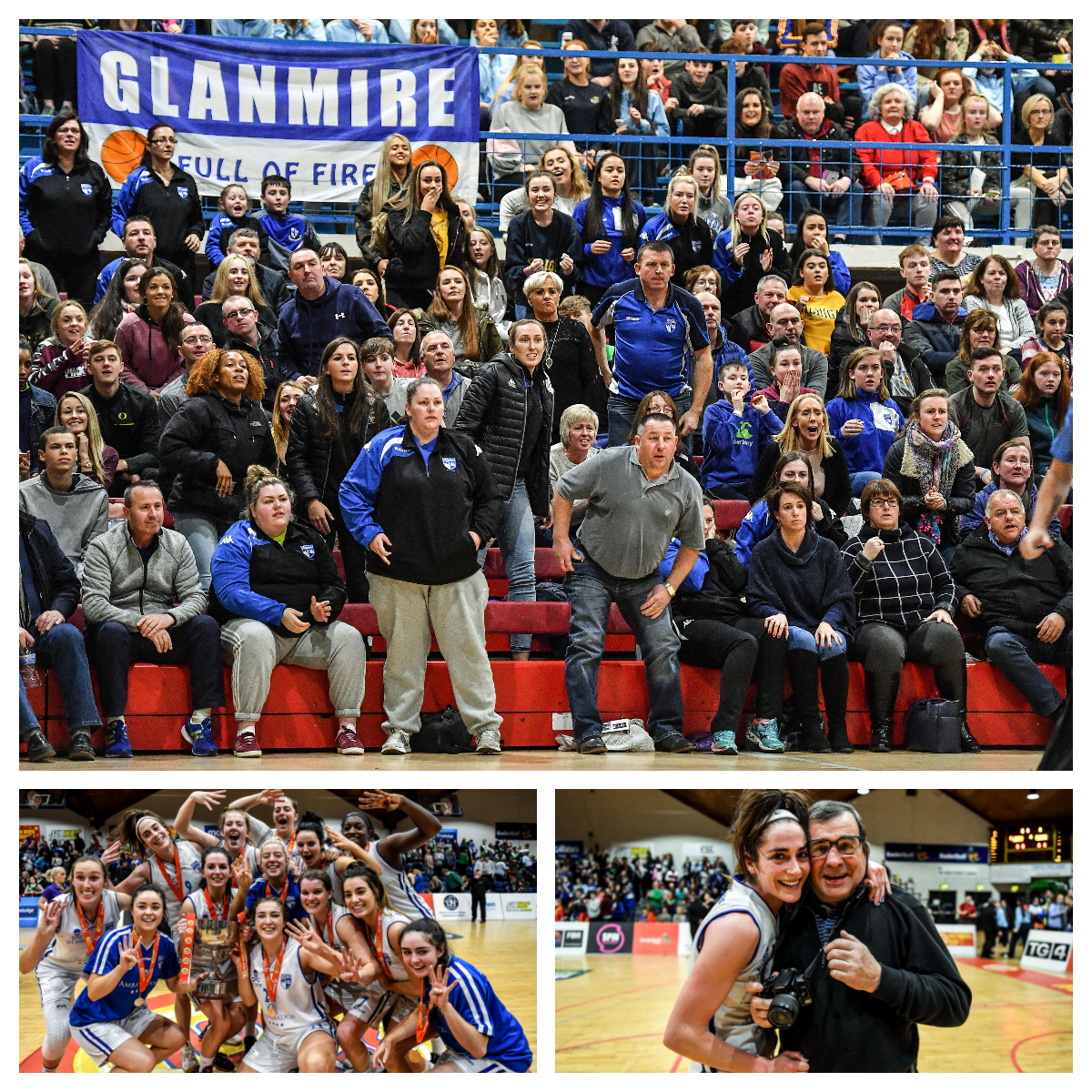 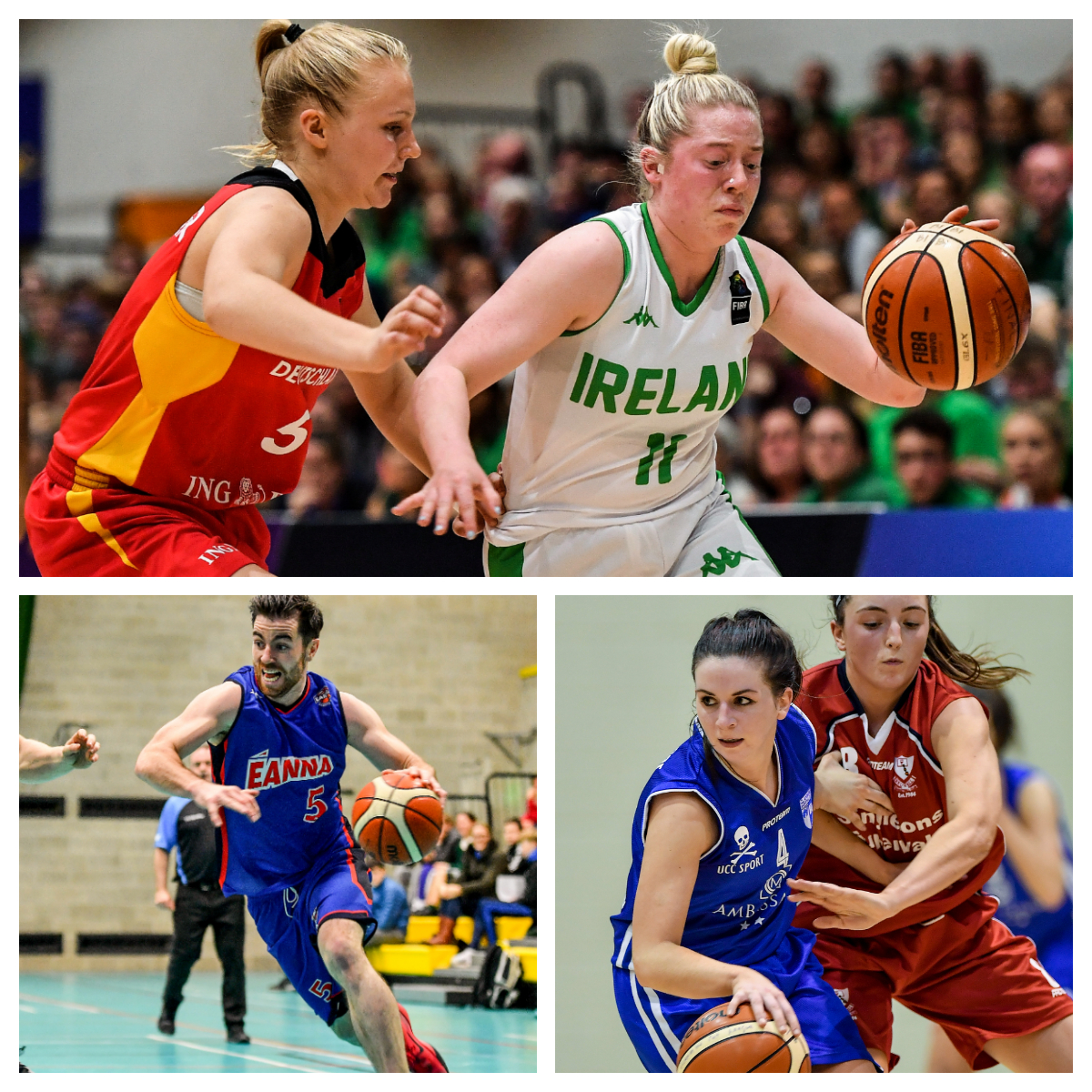 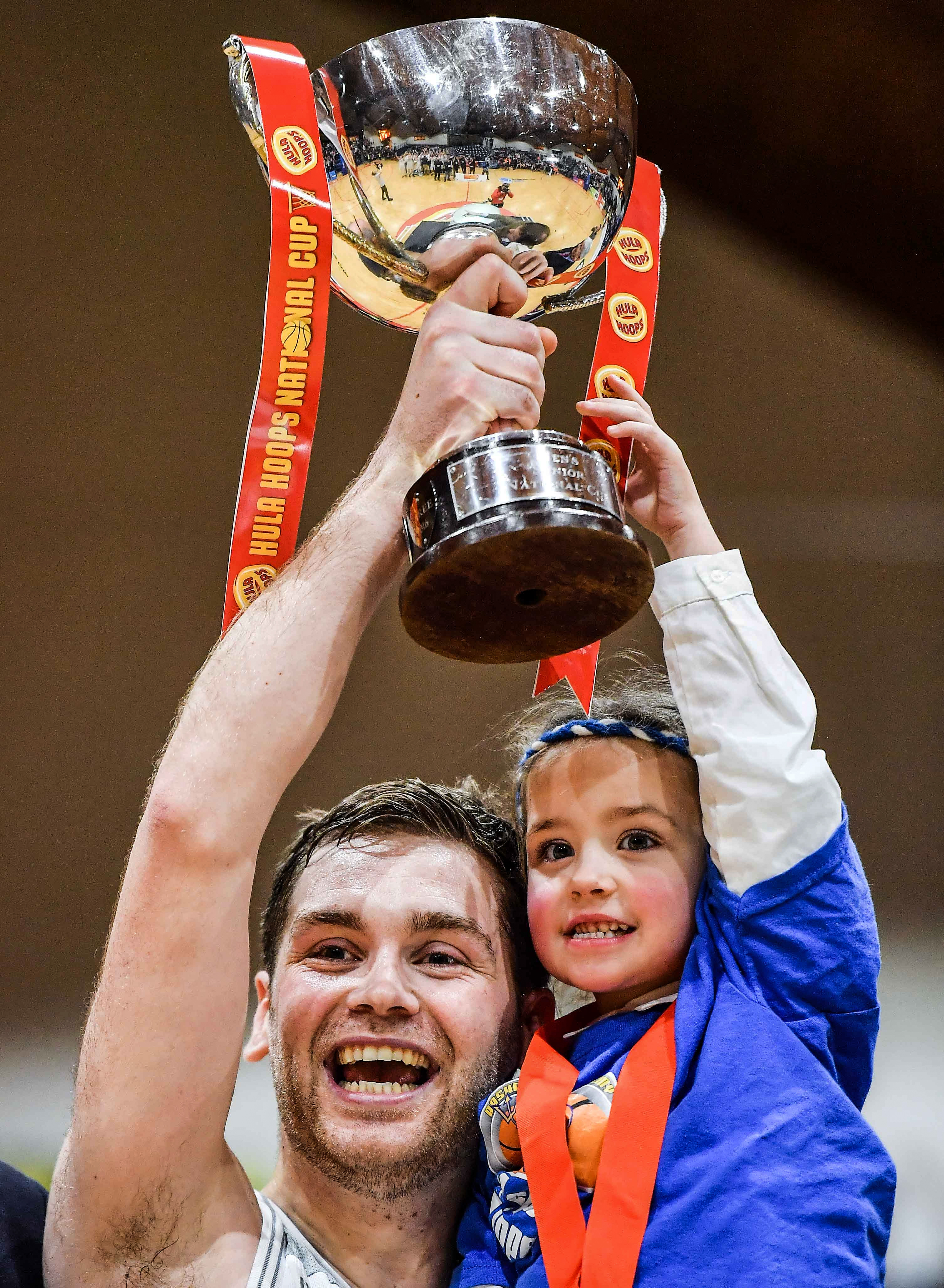 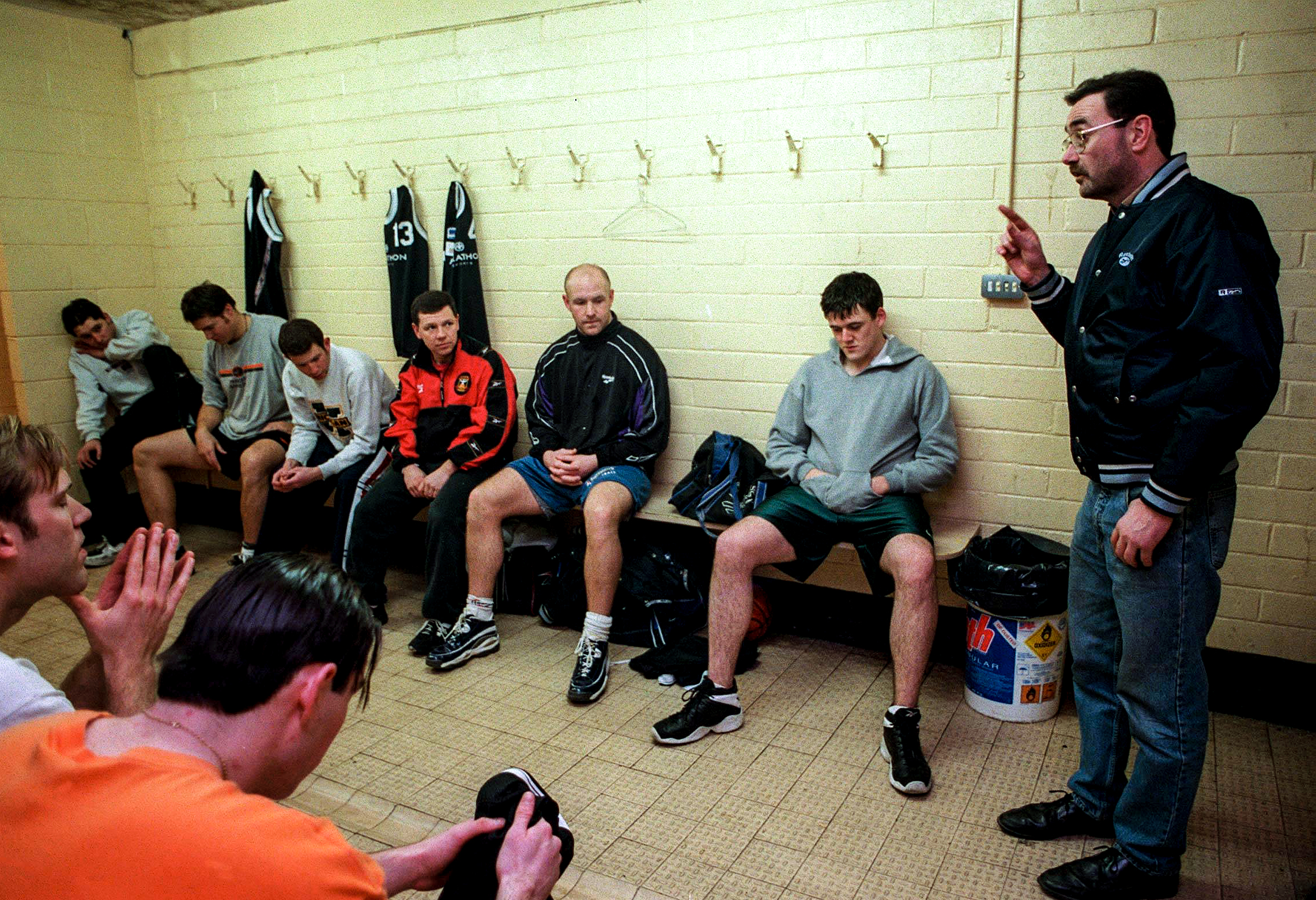 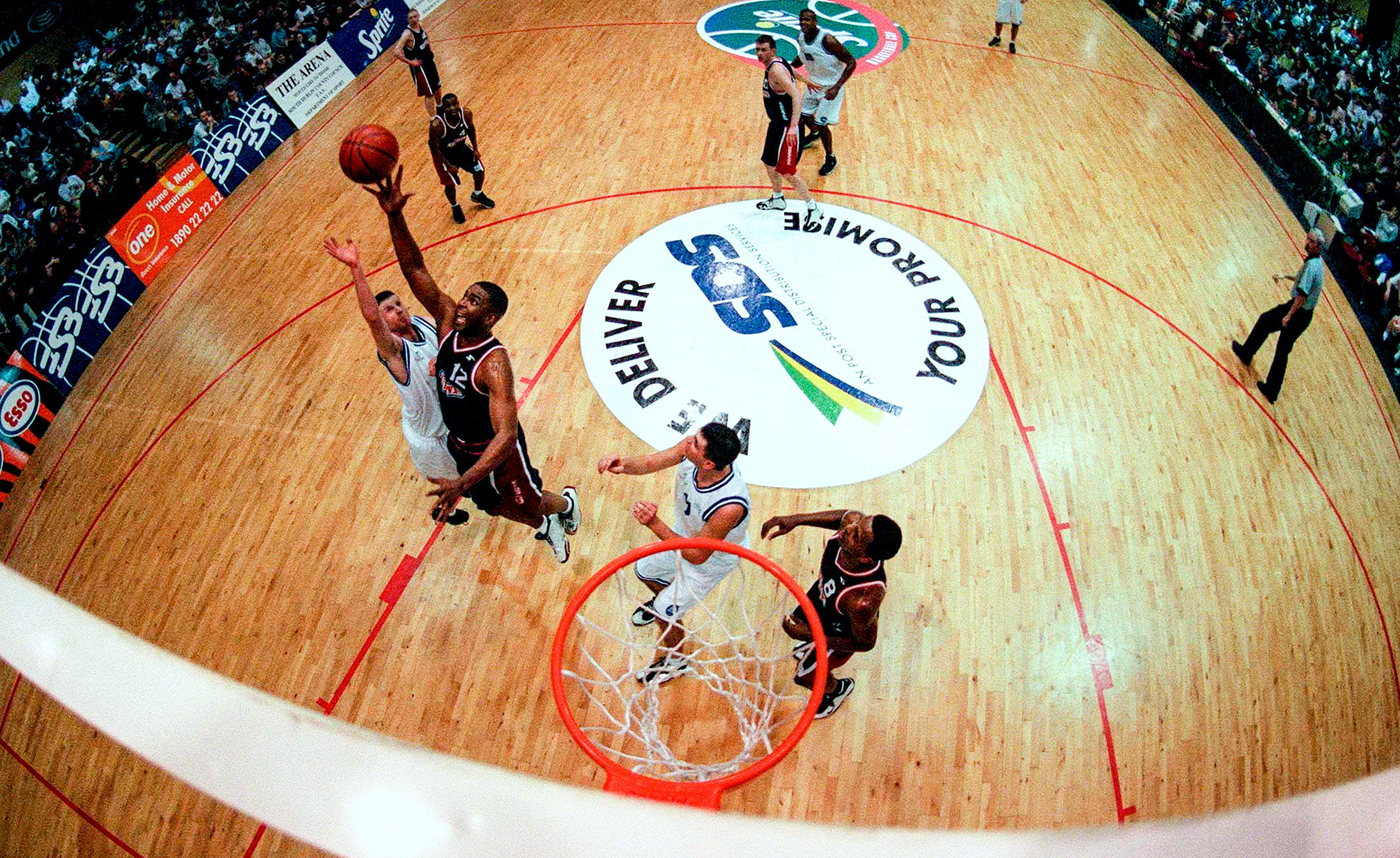 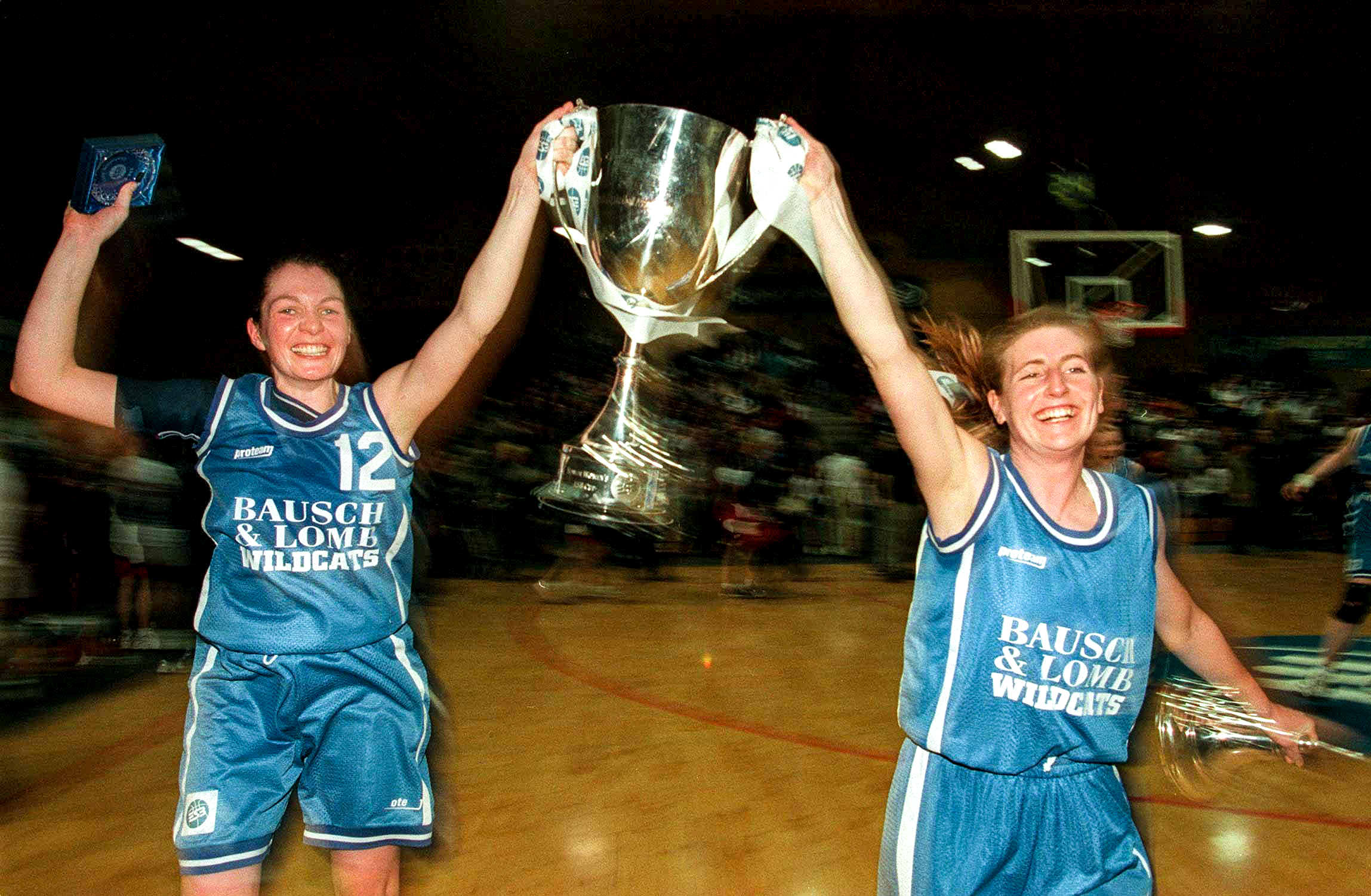 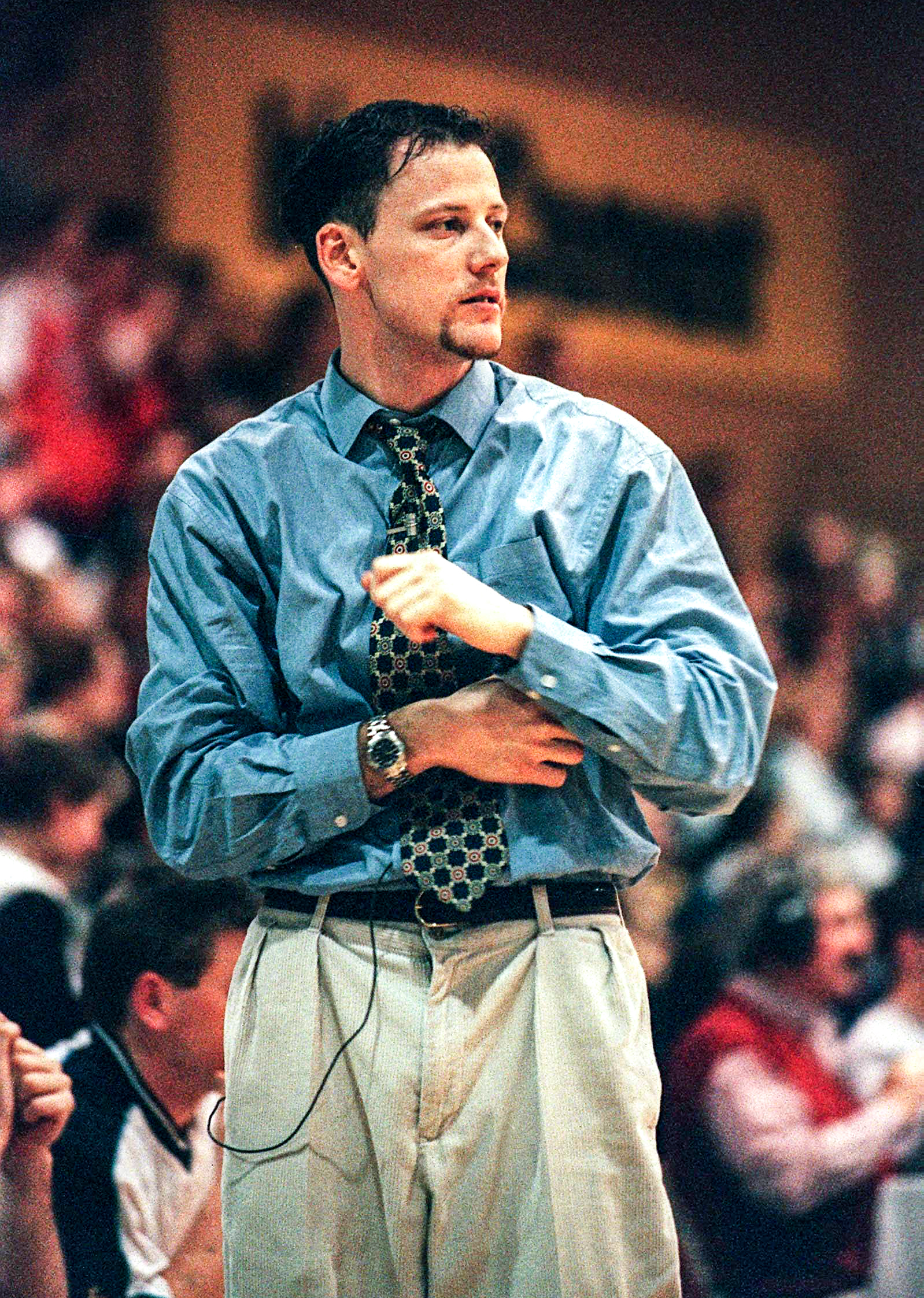 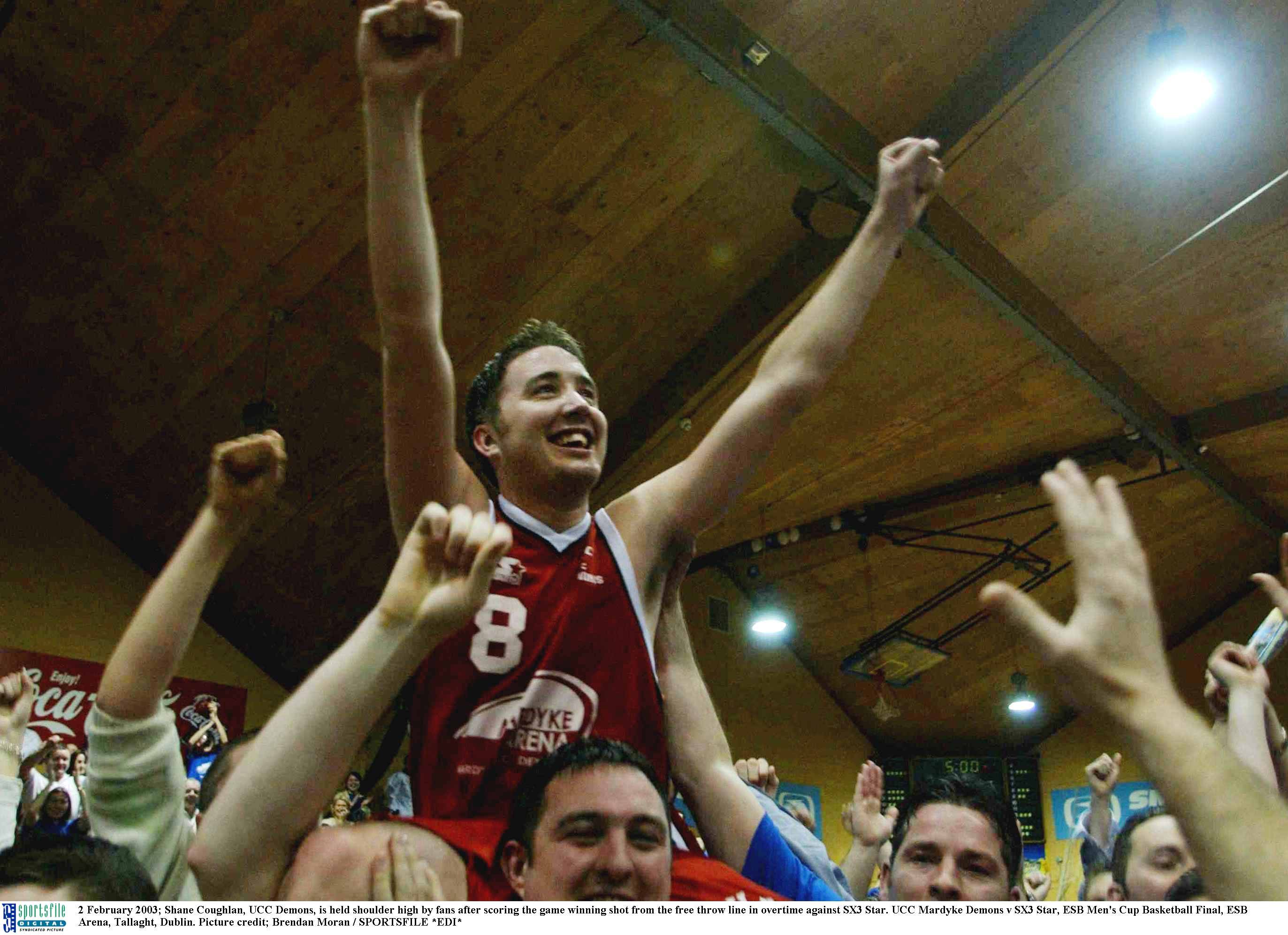 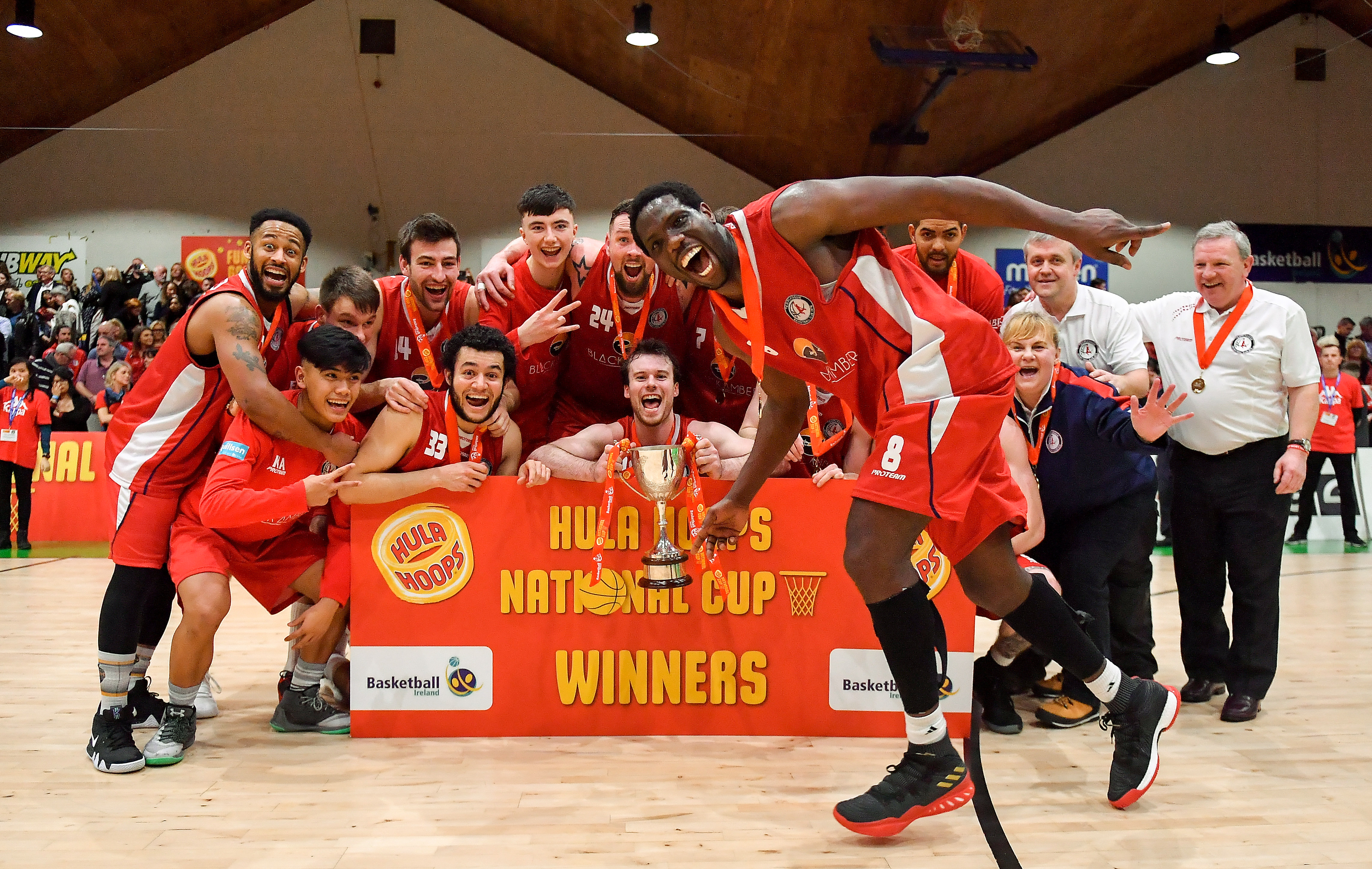 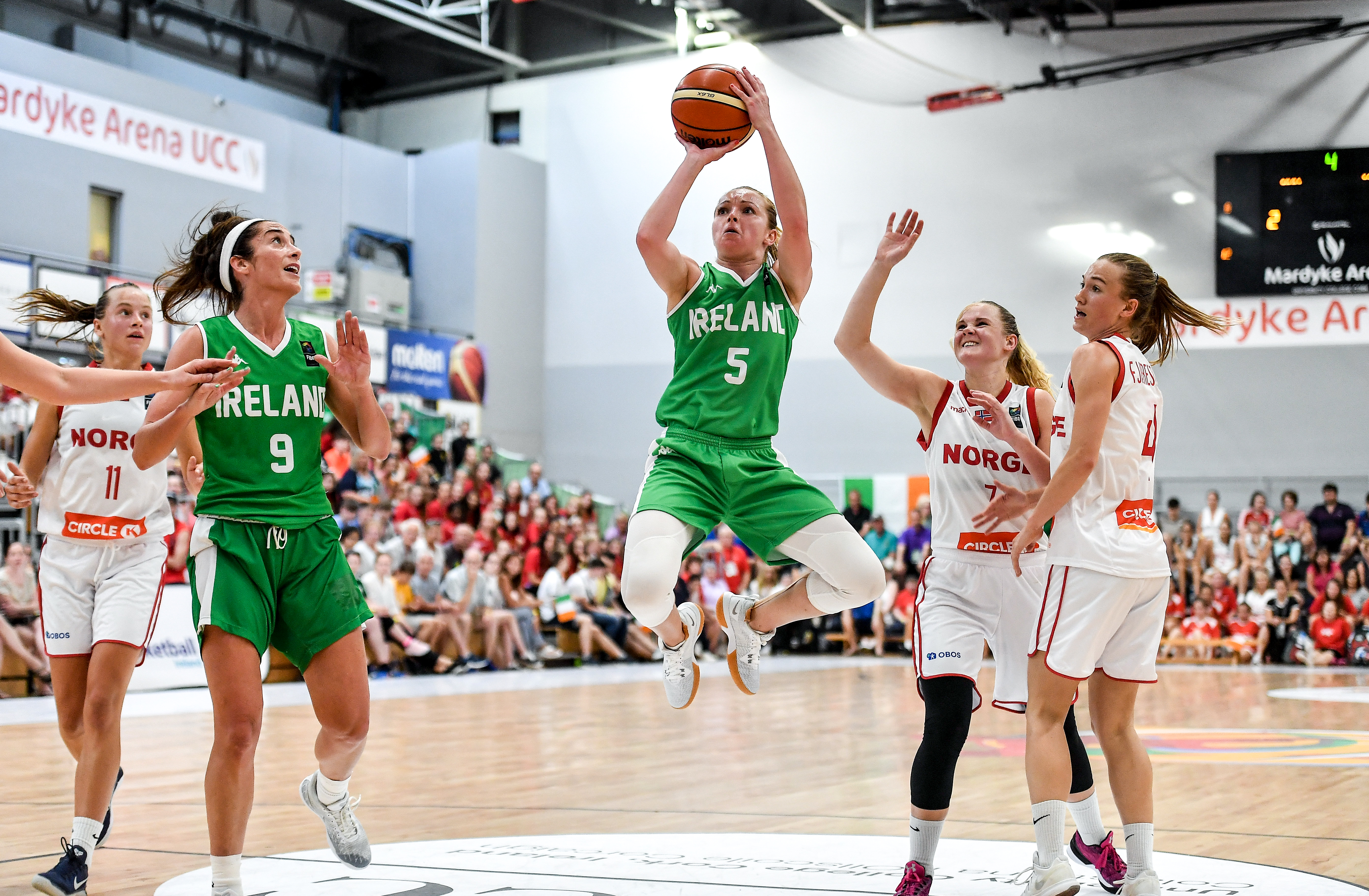 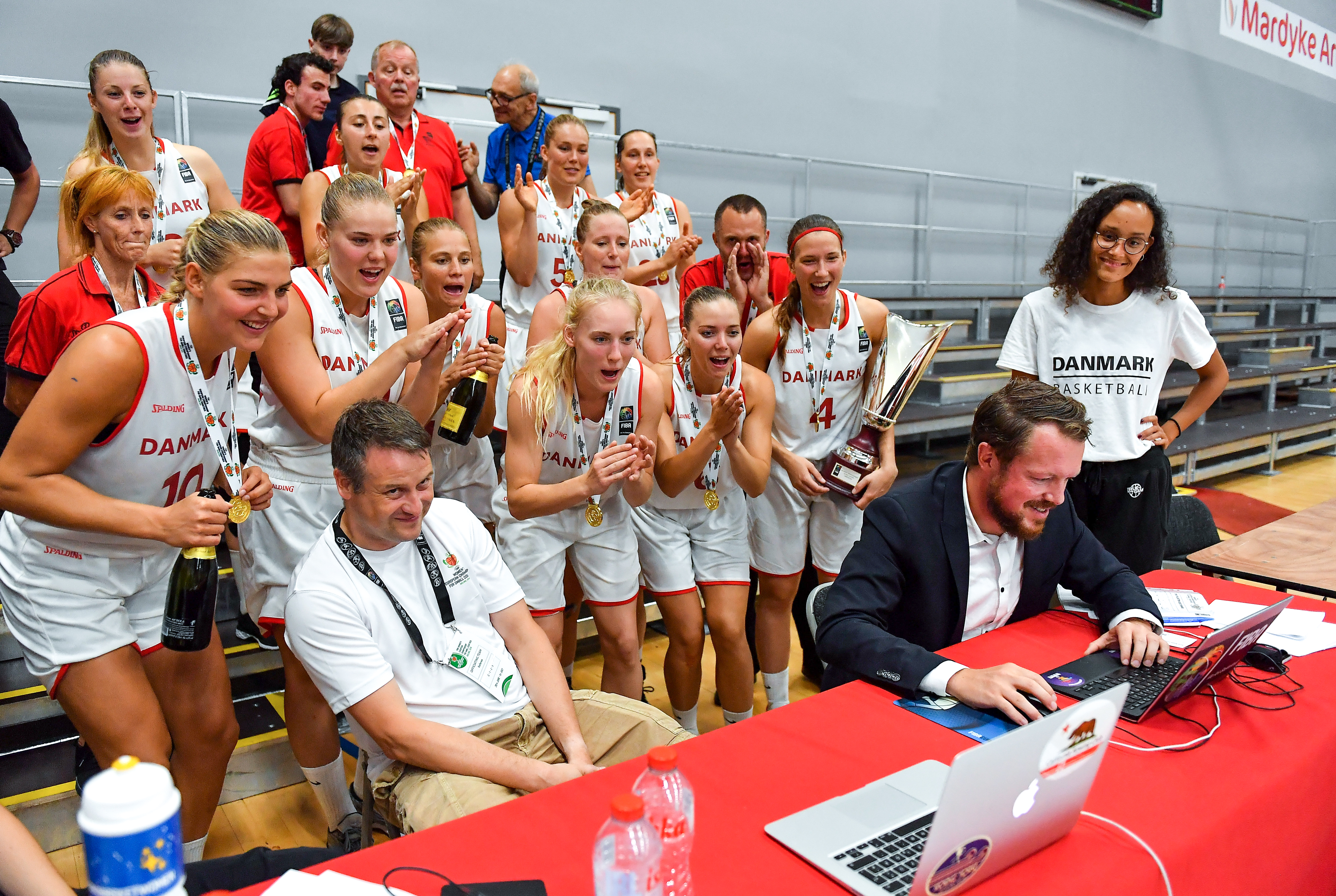 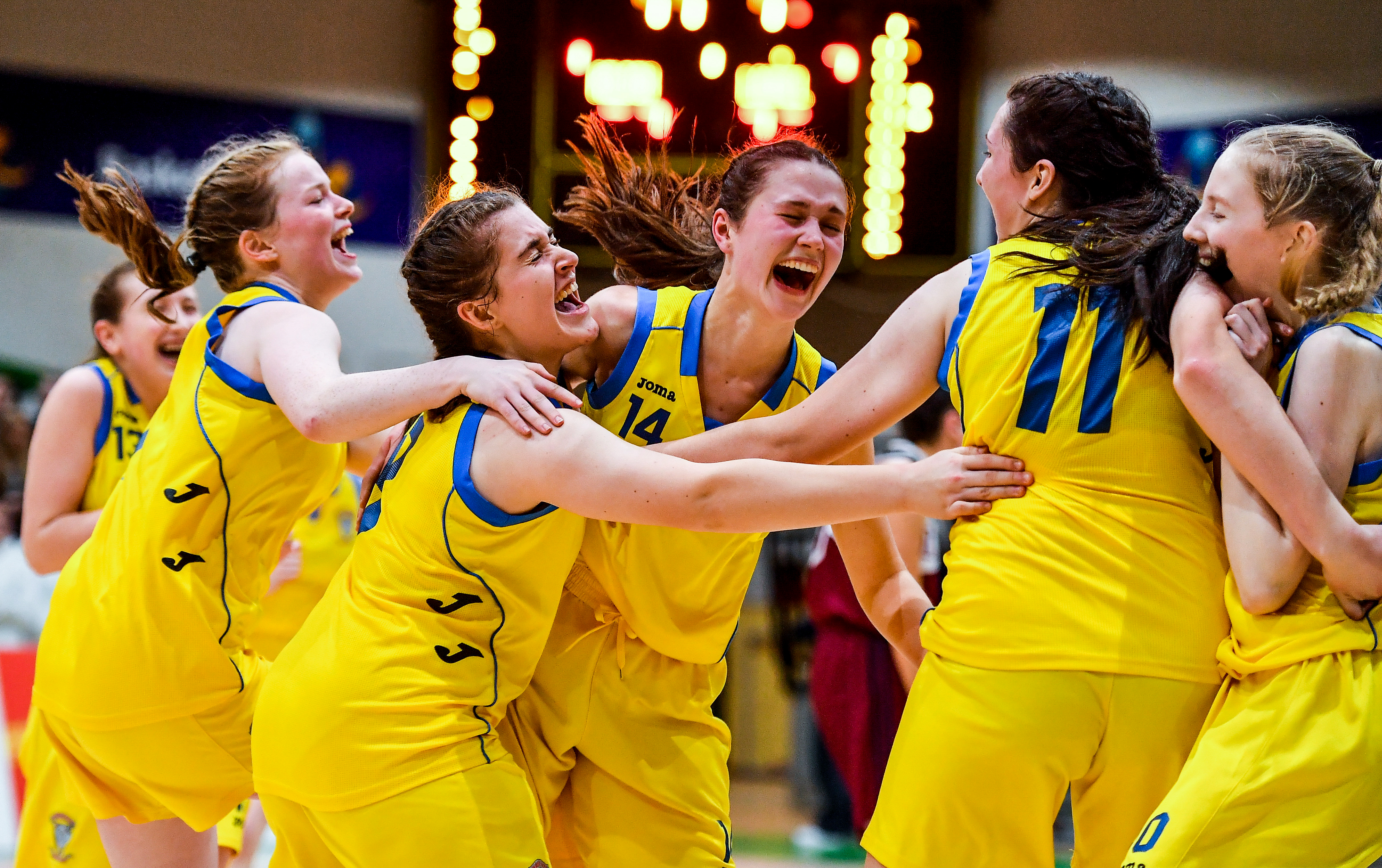 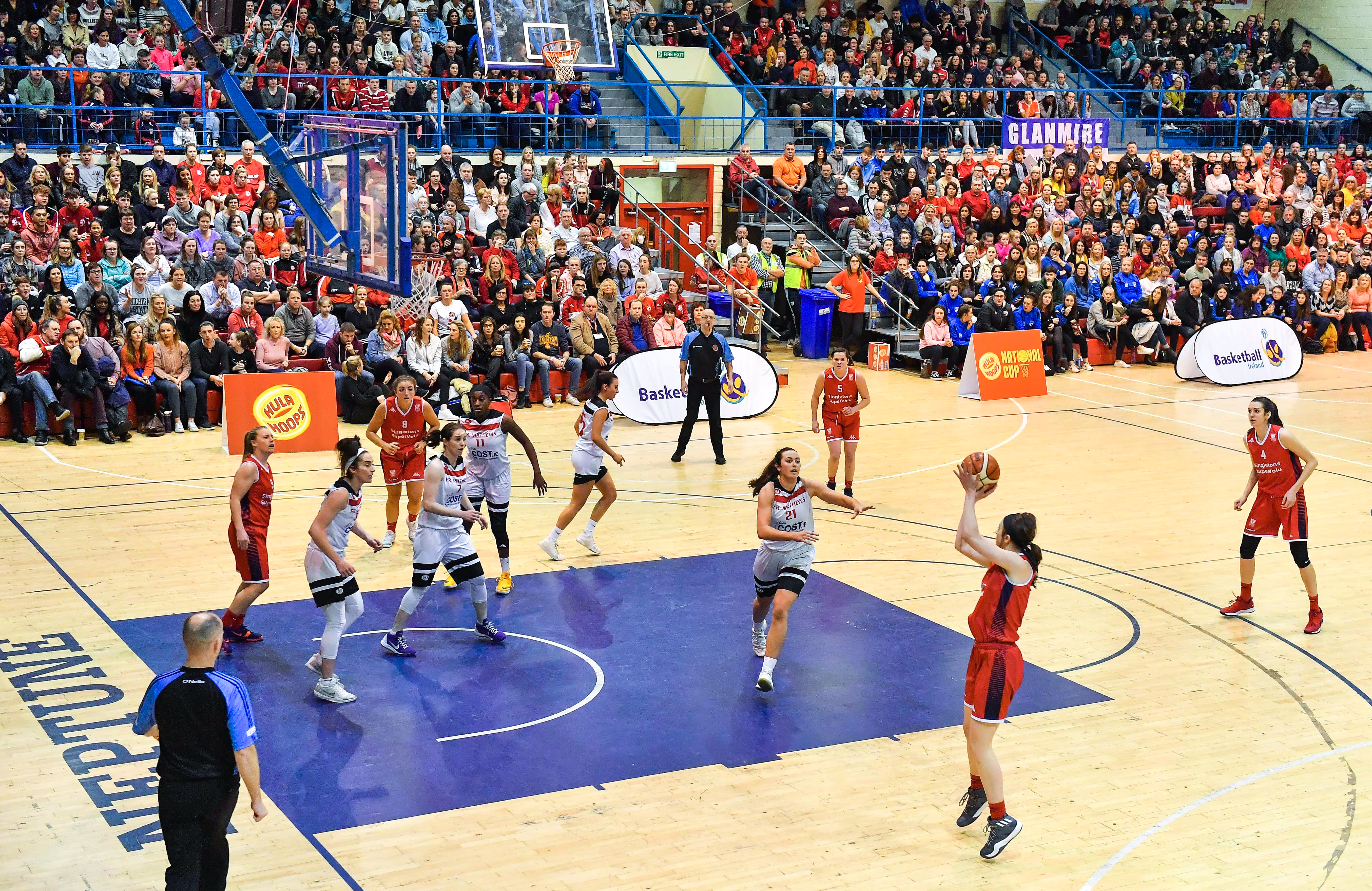