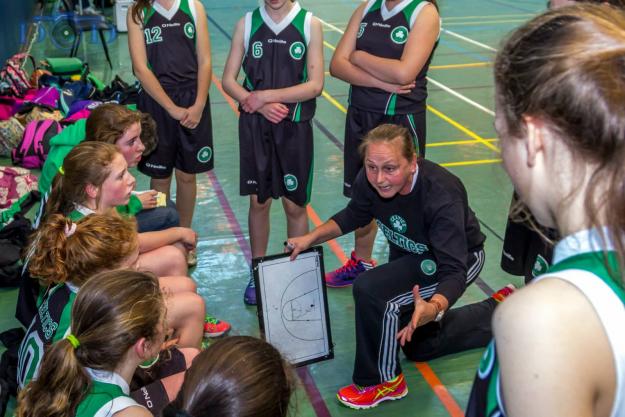 Today’s feature is on Michelle Aspell of Limerick Celtics BC who will be inducted into the Basketball Ireland Hall of Fame later this year.

Check out our Q&A with Michelle below.

I started playing at the age of thirteen in Cross and Passion College in Kilcullen, Co. Kildare. At fifteen I joined Eagles and trained with their National League team before heading to the United States on a one year High School Scholarship with Waterford High School in Connecticut. When I returned from the States, I played two seasons with Eagles in National League Division One before moving on to play with Waterford Wildcats. I was part of the Wildcats’ team that won 3 Superleague titles, 2 National Cups and 3 National Top Four titles. In 2001, I moved to Limerick and once again was fortunate to be part of a great UL team that won 3 Superleague titles, 3 National Cup, 3 regular season titles and 1 National Top Four title. I made the Irish Under 16 team and Senior Women and thoroughly enjoyed my International career. I finished my National League career with Wildcats and then played for Limerick Celtics for a few years in the National Intermediate Competition and local league before hanging up my boots.

Lots of Primary and Secondary School teams and Limerick Celtics underage boys and girls teams at all ages. At Senior Level I would have coached the Mary Immaculate College Ladies and LIT Men’s and Ladies teams.

As a young player starting basketball in Kilcullen my PE Teacher/Coach Eoin Wheeler’s work ethic, love for the game and ‘never give up’ attitude helped mould my desire to succeed, not just as a player, but also as a coach going forward. In Wildcats, Gerry Fitzpatrick’s knowledge and attention to detail had a huge impact on my development as a player and a coach. In Limerick, I see Tony’s (Hehir) commitment, knowledge and passion for basketball on a daily basis and how much time and effort he puts into developing young basketball players and bringing them to a level where they can compete in National League, Irish teams or in College basketball in the United States. The knowledge I have gained from each of them and from other coaches in my career has been invaluable to me as a coach over the years.

To create a friendly environment where all players can learn the correct fundamentals, work hard, be committed and respect each other.

I think team bonding activities and trips are essential to keeping girls at this age involved in sport. Another key factor is ensuring practice sessions are a place where all players feel part of the team and look forward to attending training sessions each week.

I like several of my defensive team drills mainly because players must work hard and support each other. These drills have really paid dividends in coming out on the right side of some very close games over the years.

There is so much great information available out there both online and in books. Some of the App’s available to coaches are very beneficial and so easy to download. My advice would be to try and get information on suitable drills and offenses/defences that are specific for the age group you are coaching. It is also a good idea to chat to experienced coaches and spend some time getting help and advice from them.

Go for It! Just keep learning and working hard and you will succeed.

I’d measure the success of a training session by the work rate of the players, by how much everyone learns and by monitoring progress towards the goals that are trying to be achieved.

I measure success not just by what the team wins but by their development as a team and how each player develops both on and off the floor throughout the season.

It’s so important, I think all coaches need to keep up-to-date  with the sport and continue to learn regardless of their level. The more equipped we are as coaches the more we can develop our teams and players going forward.

Yes the number of coaches has definitely increased and it’s fantastic to see the amount of women who have played at a high level now returning to the game in a coaching role. I think this will have a really positive outcome for the sport going forward.

I would like to see more high-quality technical courses delivered throughout the season and the opportunity for more female coaches to be involved in high performance basketball in Ireland.

To always be committed, respect everyone around you, always work hard and give 100%.

To always care about my players and not just about their performance on the court. I think it's so important that there is always a mutual trust and respect between coaches and players.

Thanks to everyone who has helped me out in basketball since I first started playing basketball in Kilcullen.  I would also like to thank my own family for their incredible support over the years. In Limerick, I would like to thank the 300+ members of Limerick Celtics, their families and all the schools in the area for their support and encouragement since I first started coaching in Limerick.