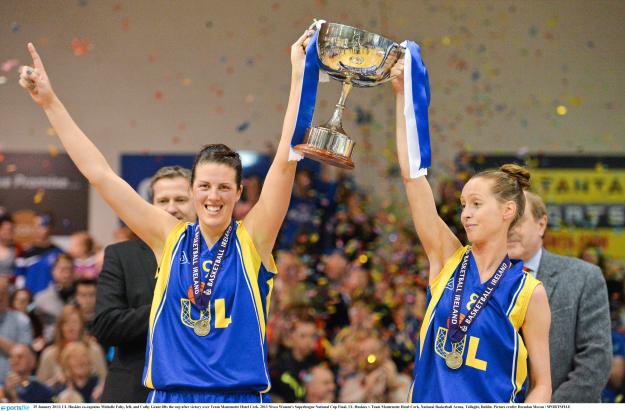 The interview began talking about all things life in lockdown and how Michelle and her children Will and Emmie are getting on. Michelle is not enjoying the homeschooling, but the children are enjoying every moment at home with mammy and on their new trampoline and swing.

Jacqui and Michelle know each other over 20 years and Jacqui fondly remembers watching her sister and Michelle playing with the Irish cadettes in 1999 and looking to her mam and saying, ‘this girl is class’ about Michelle. Who knew that it would be the start of her amazing career playing with Iona College, in Switzerland, with the Irish international team, Glanmire, UL Huskies and Maree basketball.

“Between Oranmore and neighbouring schools, they are feeding into Maree Basketball Club. The Future of Irish basketball is really bright up there for sure.”

They speak about Oranmore and how the club rose to the top with the help of Joe Shields and how the team Michelle and others were involved in setting the bar for the future stars to follow. They speak about how her career has gone full circle and how she promised Joe Shields that she would always come back to play for Maree before her career ended. Michelle managed to have very successful journeys with clubs and managed to have amazing careers with them, meanwhile managing external factors that were in her life too, for example work and commute commitments and the passing of her beloved wife and father.

“It was an hour and a half where I didn’t need have to think about anything, I just had to concentrate on breathing and not fainting.”

They discuss the incredibly difficult times Michelle has gone through but how appreciative Michelle is to the basketball community, who bent over backwards for her during these times. The messages, cards, letters, fundraising on the Go Fund Me page from people she played with and against were amazing and really helped Michelle and wife Claire get through the tough times. Michelle acknowledges that she will always have the basketball community’s backs, no matter what and wants people to know that.

“If you can be anything in life, be kind.”

Michelle is an avid believer of this motto and tells her kids this motto every day because you never know what someone is going through in their lives, in work and she advises us to not judge straight away just be nice. Michelle has been known for her kindness and generosity off the court, but especially on the court. She doesn’t believe in rattiness when playing or training, it is all about encouragement and yes, if someone puts their body on the line, you better pick them back up again.

“There was no social media back then, there was no Facebook, no snapchat, no Instagram, nothing! Literally just email. My aunty, god rest her soul, Kathleen Tracy, emailed me every single morning for four years.”

They speak about her college life in Iona and how it was a small Irish college, half an hour outside New York city. She found it tough and lived for the emails from her aunt that she would get every morning, with the news and views from home. Michelle highly recommends any person to go and experience any opportunity they are given in the USA or abroad, as you will not regret it. Her advice is to do it, and if you don’t like it, you can always come home but give it a good shot. The first Christmas she was home, she was balling crying at Shannon airport not wanting to go back, but by year 4 she didn’t want to go home!

“Well with Mark Scannell’s accent, I didn’t really understand him.”

She speaks about how she ended up playing with Glanmire and loved it down there playing with the likes of Denise Walsh, Marie Breen, Niamh and Grainne Dwyer. They discuss the different standards in Switzerland compared to Ireland. The Super League here is of a better standard in Michelle’s opinion and she spoke about how she felt a bit of pressure to perform when she first played the Super League, as she had just come back from the USA and Switzerland and she felt the pressure of needing to complete every shot or lay up.

“You don’t know what you have until it is gone.”

Michelle has shared the court with some of the best players in Ireland over the years and they discuss her experience in UL where they were all on the same page. “It was special down there, we were all early for training dying to get onto the court. There was no one running late, everyone was committed. Rachael Vanderwal, Fiona Scally, Fiona Lynch, Louise Galvin, Aoife McDermott. Training sessions were harder than some matches.” Michelle discussed how they have met up since and discussed that they really didn’t know what they had, until it was gone. “Great team, great coach, great manager and it just worked!”

“I don’t remember my flu game.”

Michelle went on to tell us that her and sinus infections do not go down well. Michelle had her very own flu game, similar to Michael Jordan and can’t remember the match at all but they went onto win a National Cup!

“Susan Moran introduced us to ‘Catchphrase’ and that brought the craic on the buses.”

They spoke about her time on the road with teams and that when she was younger it was all about having the craic on the buses. She sees teams now in the airports and they are all on their phones, but there was none of that for them and they loved it. She mentions Niamh Dwyer being the most competitive of the lot at ‘Catchphrase’, during the journeys with the senior women’s team, but she also brought the most craic. Lindsay Peat was also mentioned for her ability to entertain.

“Leah Westbrooks was the player I hated to play against!”

She admits that Leah Westbrook’s from Killester Basketball Club has been her toughest opponent of the game. Michelle finds her quick, strong and she always knows what move Michelle is going to do before she makes it.

“I was like, we’re in Tallaght, if you want to go somewhere quiet, go across to the pub!”

Michelle explained to us why she had the famous Saucepan and Wooden Spoon at the Waterford Wildcats v UU Tigers Hula Hoops U20s Cup final back in January of this year. A Wildcats fan brought a Saucepan and Wooden Spoon to the game to show her support, but one of her club mates told her to stop banging and Michelle was having none of it. The Wildcats needed the support, so Michelle banged the saucepan throughout the whole game and encouraged the Wildcats alongside another basketball legend, Trish Nolan. The girls won in the end and it was the Saucepan that made all the difference!

“It was sheer laziness, I was too lazy to turn around and throw it.”

When asked about her overhead throws with UL Huskies, she said Rachael Vanderwal would catch and score from anything so Michelle would get the ball, throw it long down the court and we would get the two points from Rachel’s lay up. Job done!

“I have never lost a final in Tallaght, any final I have played in from 99 on, I won, Tallaght is a special place for me.”

When asked about her favourite arena to play in, it had to be the National Basketball Arena in Tallaght. A place that holds fond memories in her heart as she has never lost a game there!

During the quick-fire round, Michelle chose Tea over Coffee, Instagram over Twitter, a boat, her kids and chocolate would go to a desert island with her but she also gave some great advice to the basketball community and people from all walks of life.

“Never give up, since playing on Irish teams from U15, U16 all the way up, ask Niamh Dwyer Kate Maher, especially playing for your country, we are the fighting Irish for a reason, you just literally never give can never give up. It doesn’t matter if you are 20 points down, you’re diving on lose balls, getting rebounds, doing the dirty work until you hear final buzzer…anything is possible, just never give up.

“My thing now, recently from the last 2 years is, live your live, stop putting things off. You don’t know what is around the corner. If you make plans, make them for soon. Just live your life, have fun and keep smiling.”

Watch Episode 3 of 'Bench Talk' in full below: