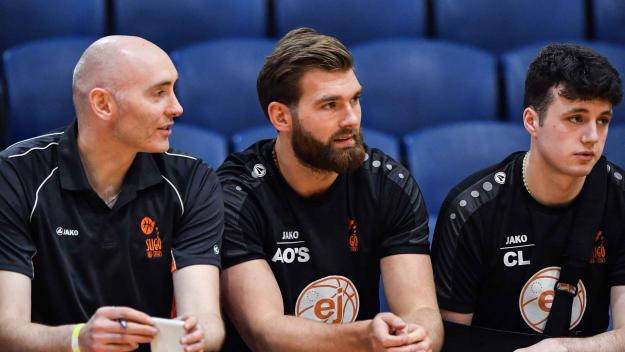 This summer has been very different for Aidan O’Shea due the absence of intercounty football for Mayo, although he is enjoying being involved in the club environment with Breaffy GAA.

“Being back with the club has been a really nice way of getting back at it. Usually I wouldn’t have this consistency with the club, so it’s great to be back amongst the boys. It’s probably a change for the guys, they are not used to having us around during the week. It’s a nice change to be honest. For my club, you know, for the last obviously ten, twelve years they probably see me for less than ten sessions a year and so being able to be with them literally every training session is a great change. Obviously it can be very beneficial for the group as well. If you are trying to work on something if you are away it’s very difficult to bed that in, so it’s been really good and it can be only very beneficial.”

Aidan has been keeping up-to-date with the NBA Bubble and is looking forward to the games returning. He finds their contact tracing testing interesting and doesn’t think that GAA players would be comfortable with the NBA approach.

“It is probably something that we haven’t talked enough about yet. There does seem to be that stigma around somebody that has Covid-19. Whether that is a county footballer, or somebody that is walking down the street. I think the impact of an intercounty footballer or even a club footballer at this moment in time who potentially tests positive to Covid-19, it has a real knock-on impact to maybe their career, or where they are working, or there this kind of scaremongering that will happen. I’m not sure the players would be very comfortable about the way the NBA are doing it announcing that they have Covid-19 especially as amateurs. It is probably something that we need to do a bit more thinking about how we go about that, because the question is out there. Like if somebody on our team gets Covid-19 and you can go through all the contact tracing, would another team be comfortable playing, what are the implications to the team and stuff like that. There are elements to that we don’t know and we probably won’t know until it happens.”

Aidan explained how he was first introduced to basketball and how prominent the sport was in Mayo.

“Basketball was big in Mayo when I was growing up. At the time in Castlebar, we had two different clubs. You had big town league going every Saturday morning and it was very much kind of part of life in Castlebar and obviously Ballina. There wasn’t many kids who didn’t play basketball. It has kind of shifted now, but back then basketball was just a part of the way things are in Castlebar. I played it like I played any other sport but obviously I had a grá for it, I was quite decent at it and then from there when you get into Secondary School, you know yourself, it is a pretty big deal in Secondary School. We were lucky enough to have decent players and we were playing at A level. Before that I suppose, we had the U19 team, I was in 6th class and the U19 team won the League and Cup double beating Coláiste Éanna in both and you had the likes of Tommy Canavan, Herman Hyle who were on that team and you know as a kid growing up you’re like these guys are playing, and I suppose it was unheard of growing up for a Mayo team to win a Cup and League double. They had pride and place up in our school when I started in St. Geralds College DLS. There was big posters of them up in the school, it was a huge deal for us.

As a kid growing up, Aidan spent most evenings playing GAA and basketball at school and club level.

Aidan believes that the success of basketball in Mayo came down to Volunteerism.

“It is hard to pinpoint. I think that there was a general volunteerism around the town that had a huge interest in basketball so that really spawned into St. Geralds. You had different clubs coming into St. Geralds who may not have played together in the locality that all of a sudden were coming in to St. Gerald’s playing together. We were very competitive. I suppose, Herman and Tommy and that crew were really like the trailblazers for us because we were seeing them doing what they did and they were the first to do it and that kind of inspired the generation to come. For the next ten years, there were decent teams coming out of St. Geralds and most age groups. Look, we weren’t winning All-Irelands but we were competitive at most levels. It is probably down to strong club structure behind the schools and the schools really nurturing that through.”

Aidan has some fond memories of his experience on Irish squads:

“To be honest with you, it was a great time. I look back on that with real fond memories. Bit of disappointment in there but like we were travelling around the country. I was in Dublin most weekends or I was down in Cork, heading somewhere every weekend on a train as a kid. Ger McDonagh from Castlebar would have been on the squad as well at the time. I got whittled down to the last twenty you know, obviously you named out some of the players there, still playing and doing really well for themselves. I think I just missed out on the pre-tournament, I was disappointed. I thought I would have made the pre-tournament. I knew I was under pressure to make the final tournament, I probably wasn’t at the same level that those guys were at but I was hoping I would sneak into the pre-tournament but didn’t get there. I remember it came out in a letter whether you got in or not and I don’t know, for some reason, something happened in the post. All I know is that it didn’t arrive out quickly and I knew if I didn’t get a letter that it meant I must be in and it didn’t arrive. I remember my mother coming up one evening after school and I was doing my homework and she was like ‘the letter arrived’. I was just like ‘ah no!’.”

Aidan is one of a number of GAA players who have basketball experience and he’s used those transferrable skills to good effect when playing Gaelic Football. He highlighted some of the benefits.

“Having decent hands, spatial awareness, hand-eye coordination, stuff like that. Seeing things that people who hadn’t played basketball might not have seen probably would have been a strength that I would have had from playing all those years.”

Aidan believes that GAA has evolved massively during his time as a player.

“It has got very tactical and technical in terms of teams approaches. I think the key element prior to ten years ago, you know, possession was probably not held in the same regard as it is now. Possession is key now. Turnover and where we lose possession and that kind of stuff is thought about a lot more. In terms of defence like, it’s not just one-on-one defence at the back now. You’re talking about different structures. Forcing people away from the middle and then you look at it from an attacking perspective and correlation - you look at Dublin and the way they are smart around their screens and how they use the runner’s body effectively to create space for shooters. There has been a lot more thought put into what people are doing defensively and attackingly and I think there has definitely been an influence from the basketball side of things.”

With players keen to avoid turning the ball over and wanting to shoot high percentages, analytics has become a huge thing in basketball and it’s increasingly the case in GAA. Speaking on the danger of recycling the ball too much until that shot is on in GAA, compared to the shot clock element in basketball, Aidan said:

“I think that that’s the thing. The conservative piece is the concern. You might lose that element of individualism of the game. This constant - wait and wait until the high percentage shot. You know, you don’t want to be the one to bring down the overall team percentage. I think you’re right, some of that is in there at the moment. Maybe we have gone a little bit too far from before, where we were a bit more carefree and turning over the ball a bit too much, to being too focused on the right shot every single time. As you say, I think that maybe it is something that we will have to look at in time. Maybe we can’t go across half way and I don’t know how you put in a time clock, because what’s the ideal amount of time you would have for a Gaelic Football team and then there’s the referee element. There’s a couple of things there that would be difficult, but it is something that maybe we need to be future-proofing for.”

Aidan went back to play basketball in 2016 and joined EJ-Sligo All-Stars basketball club. He was on the bench injured when his team reached the President’s Cup final and lost out by 10 points to Neptune basketball club. Speaking about why he made the return back to basketball, O’Shea said:

“There was a couple of things. We lost in the Club Championship quite early with the club, so I had time I suppose first of all and two, I have a grá. I love basketball, I love playing, I love watching it. I hadn’t played it properly since first year of college, where I played a bit of D1 in Dublin and I just wanted to get back and try it out. You know, I talk about it being a kid again and just getting out playing the sport”.

While he is not playing basketball at the minute, he admitted he may make an appearance back on the courts in the future. Brian Fenton and Michael Murphy came out on top as his toughest footballers he has ever had to mark. Ciaran White and Scott Kinevane are his toughest basketball opponents. He also reflected on the game that he would replay if he got the chance, tune into the below to watch the full episode.