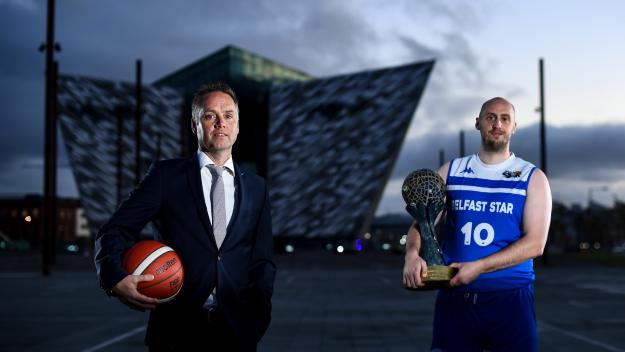 The 2020/21 National League basketball season begins this weekend, however defending Men’s Super League champions Belfast Star’s opening three matches are postponed. They will have to wait until November 7th to start their season, with a trip to DBS Éanna.

Head Coach of Belfast Star, Adrian Fulton, is philosophical about the situation. “I think everyone will have a different perspective on the league this season. I’m sure every team will still want to compete and win games every weekend when the ball is thrown up, but we have to hope and pray that everyone remains safe and healthy. It is frustrating that we can’t start our campaign for a few weeks, as everyone is keen to get back out on the floor again. A big thanks to Bill McCotter and our committee for working so hard for Star to compete this season.”

Belfast Star will have a new home this season, they will play their games at Lisburn Racquets. Their first game at the venue is due to be on November 28th, when they host UCD Marian in round 6.

DCU Saint Vincent’s also will have to wait until round 4 to begin their season, they’ve been given a three-week derogation by the MNCC, which means their first game of the season will be a trip to UCD Marian on November 7th.

All six Women’s Super League games are scheduled to go ahead. Defending champions DCU Mercy will be tipping off their season in Trinity Sport against newly promoted Trinity Meteors, who won the Division One title last season. Head Coach of DCU Mercy, Mark Ingle said: “DCU Mercy as 2020 Super League champions are looking forward to the season ahead and are delighted to be kicking off the campaign with a very tough assignment against Trinity Meteors. It will be unusual without any crowds, but hopefully the situation will improve towards the end of the year. It is vital that we continue to keep our players healthy and playing in a safe environment.”

Basketball Ireland CEO, Bernard O’Byrne said “Naturally there will be match postponements during the season, as we all continue to deal with Covid-19. Basketball Ireland and clubs will be working on dates to reschedule those matches affected. We are excited to see our season get up and running, with a huge number of our National League clubs streaming their games on Joymo too. It gives basketball fans the chance to watch basketball, both live and on-demand, with over 200 games set to be streamed during the 2020/21 season.”

19:00 Maree BC v IT Carlow Basketball