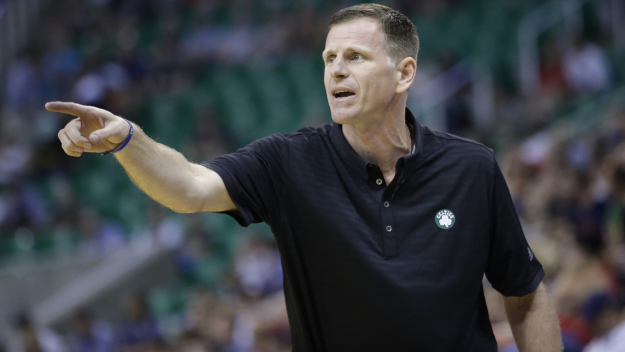 Basketball Ireland will have a range of talks available online. The talks will feature experts in their field, discussing topics that affect performance at both elite and grassroots levels. Each talk will be in a panel format and will last 30 minutes.

The event will be capped off with interviews with both Jay Larranaga and Susan Moran.

Larranga is a former Irish international and is currently the lead assistant coach with the Boston Celtics. Jay will be discussing how to build a high-performance culture.

Moran is Ireland’s only ever WNBA player and is now the Player Development Coach at St. Joseph’s University. She will be discussing how to balance team and player development.

Basketball Ireland Head of Development Ciaran O’Sullivan will kick off the day with his session on ‘Reconceptualising Youth Player Development’ taking place at 11am. Speaking about the conference, Ciaran said:

“Over the last number of weeks, Basketball Ireland staff members have been busy catching up with experts from around the world to discuss and cover a whole host of interesting topics. These experts are delighted to exchange views on conversations that shape both performance and participation, we hope the basketball community enjoy the day full of insightful conversations.”

All discussions will be available to watch on Basketball Irelands’ YouTube and Facebook channel which is available here.

See below the full running order of the day:

Brian is a former professional and college basketball coach who has written numerous books on skill acquisition and advantage-based basketball. Having worked in Ireland, Denmark and Sweden, Brian knows the European game and has coached both males and females. Brian has sold over 23,000 books on basketball skill development.

Mark O'Sullivan is Head of Youth development (8-12) and part of the Research and Development department at Swedish Hallam University. He has published a significant amount of research papers that capture his work both as a coach, academic and researcher. Mark has also consulted for the Canadian Soccer Association on coach education, helping build their new evidence-based Children's license (launched 2019) and also for the British Columbia Soccer Association on disabled football. While football is his main area of interest, he has also consulted and gave workshops on coaching and coach education in basketball, Floorball, Golf, Figure Skating and Tennis.

1130am - Strength And Conditioning Principles In Basketball

Peder is the Head of Athletic Development for Basketball Ireland and is a former Irish International. He also is a co-founder of MG Corporate Wellness.

Kevin is Head of Athletic Development for the National teams. Kevin is also a former Irish International.

Kevin is a movement expert based in Cork who is recognized as an expert in the field.

Eanna has an MSc in Human Performance and is a former strength and conditioning coach with the Houston Rockets in the NBA. Eanna plays basketball for Glasnevin and previously played Super League with Swords Thunder.

1200 - Increasing Your Win % Through Performance Analysis

George is the Head Performance Analyst for Munster Rugby and has been a member of the IRFU’s high-performance department since 2009.

Paul is the Irish U18 Men’s Coach and has been a successful coach in both the Men’s and Women’s Super Leagues.

Hannah runs Next Generation Health and is a Nutrition and Performance Consultant. Hannah also is a member of the Senior Women’s Irish basketball team, a league winner with DCU Mercy and works with the underage Irish squads.

Lauren is a former basketball player who currently plays rugby for Sale Sharks and Ireland. Lauren has her a performance nutrition consultancy, LVD Performance Nutrition and previously worked for the English Institute of Sport as the performance nutritionist at different times for British Cycling, British Badminton, British Swimming and more.

1300 – Getting Recruited To Play Abroad

Paul is the owner of Sports Dream Academy. He is a former NCAA Division 1 scholarship player at Lafayette and Irish international

With nearly a decade of NCAA Division I coaching experience, Drew coached Paul for several seasons at Lafayette and currently coaches in the prep school system. Drew has helped numerous Irish and international players go to college in the states.

Deirdre is one of the most recognizable coaches in Irish basketball and has experience coaching both men and women at the top level. Deirdre also lectures in the Ulster University’s Sports Studies department.

Esther works for the Sligo based sports science company Orreco. She has a Masters in Sports Science and works as part of the Orreco’s female athlete’s team. Orreco are one of the world leaders in bio-analytics and they currently work with clients across many of the world’s top professional leagues including the NBA. They were credited with being a major influence on the 2018 USA Women’s World Cup-winning team, particularly in the management of training loads based on menstrual cycles.

Lisa is a UEFA licensed coach who was the first female to ever coach a men’s first team in Ireland. She has extensive experience managing in the UK and has experience coaching both men and women at the top level in Ireland and the UK. Lisa is also a regular pundit on RTE’s football coverage.

Ciara is a lecturer in Applied Sport and Exercise Psychology in WIT. She has worked with Ireland’s Olympians in the past and is currently helping several athletes prepare for Tokyo 2021.

Martin has a FIBA Europe Coaching Certificate, has coached at national and international level and is currently the Basketball Ireland Girl’s Academy Head Coach.

Jay is a former Irish head coach and captain who has played professionally for twelve years in Europe’s top leagues. He is currently the Boston Celtics lead assistant coach.

Susan is a Basketball Ireland Hall of Famer and the only Irish born player ever to reach the WNBA. She is currently the Director of Player Development at St. Joseph’s University her alma mater.

In case you missed it, watch back our Behind the Ball interview with former Limerick Sport Huskies, Irish Rugby and Kerry GAA star, Louise Galvin.