International catch-up: the latest from our coaches

home / news / International catch-up: the latest from our coaches

International catch-up: the latest from our coaches 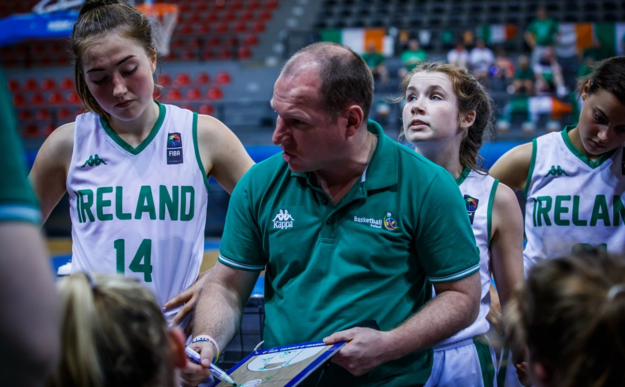 We caught up with all our international head coaches, from U16 to senior level, to check out what they’ve been up to in recent weeks.

The U16 squads have yet to be able to hold their trials, with the Academy coming to an early finish last March. The men’s and women’s head coaches, Pat Price and Andy Gill have been working online with a squad of approximately 100 players, to give them as much information as possible.

U16’s men’s head coach Pat Price said: “We are continuing our Zoom webinars with the panel of eligible players. Our information sessions are engaging the boys, providing helpful information and resources and giving a glimpse into what the programme will entail, until the time that we can get back on the court together.” 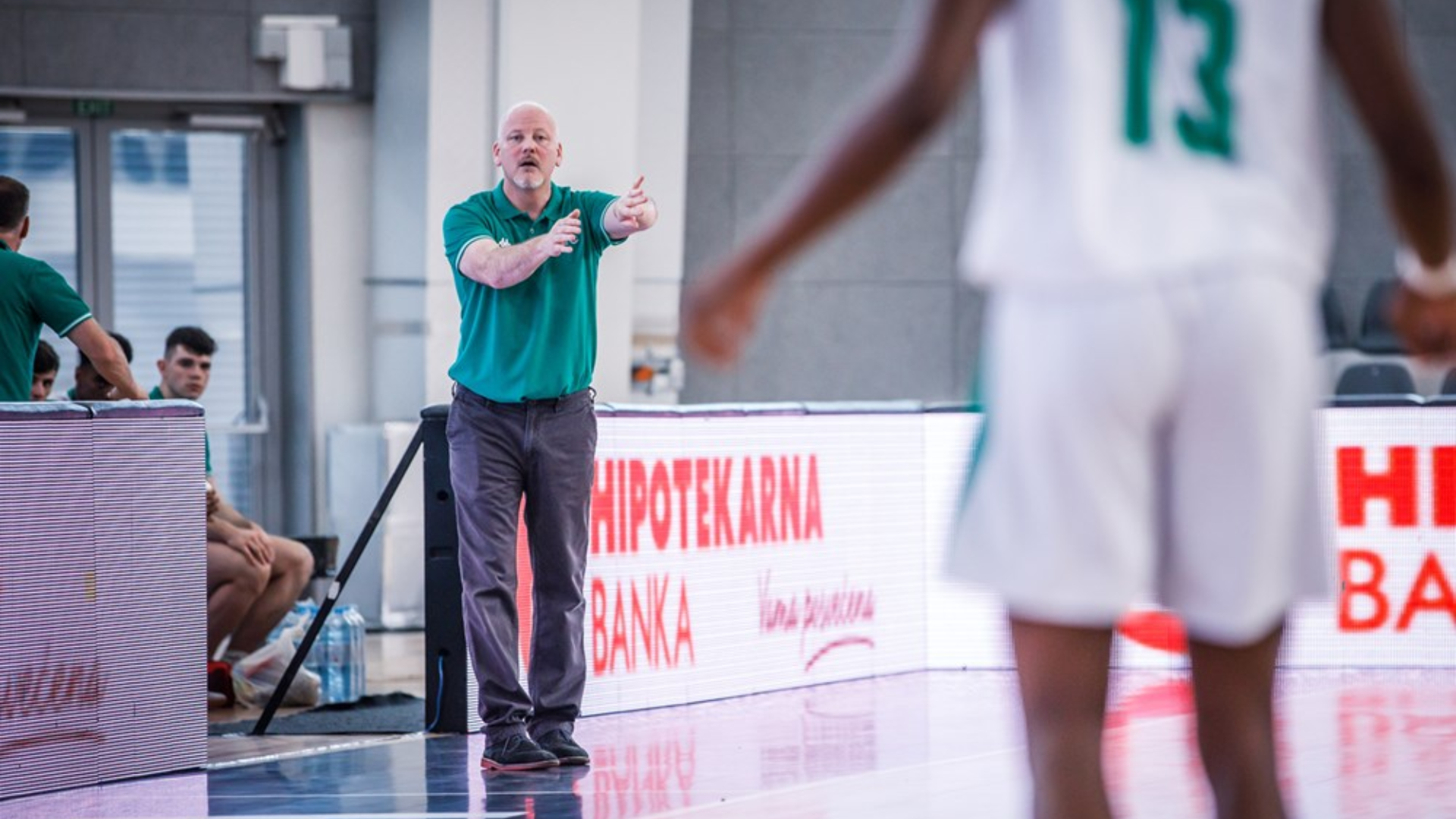 Andy Gill says the U16 women have been having similar sessions: “The U16 group of eligible players from the Academy programme of 2020-2021 have completed a number of online sessions, which have been a positive experience for both presenters and players. We have been able to give an insight into the different components of international play and provide some preparation tips for players when they’re able to resume playing. Feedback has been encouraging and we feel that we will continue aspects of this approach, even when the programme begins.”

The U18 squad moving up from last years U17 development squad had started training on the court in September and early October, before the level 5 restrictions commenced. They currently have a lot smaller numbers in their squads. Similarly, to their U16 counterparts the U18 squads have had online sessions with the men’s head coach Paul Kelleher and women’s head coach Tommy O’Mahony.

Kelleher and his staff have - like everyone - been frustrated by the restrictions due to Covid-19, but they have been keeping busy. “While the situation with Covid-19 has been tough and not being on the floor, it has allowed us to deep dive into areas that will help us connect when we do return to the floor. Our values and culture that we want around the team has been a strong focus, while also promoting our conditioning and other skills that will help us. We have really tried to make the most of it. It has been frustrating at times with no clear path, but the boys have done a remarkable job when we meet weekly on Zoom sessions too”, Kelleher said.

Meanwhile women’s U18 head coach Tommy O’Mahony says he’s very pleased with how the players and staff had interacted to get the most of the online sessions. “While basketball is currently not in its usual format, we have to find ways to keep the girls minds and bodies in the right frame for the upcoming FIBA European Championships. Through various online platforms the girls are learning more about our style of play that we will want to pursue and how to stay on top of their fitness. There was also time for a virtual talent show to take place, with some controversial winners coming out on top!”

The Ireland U20 teams would normally be gearing up now, ready to start as soon as the regular season finishes at the end of March, but with no league basketball being possible this year the men’s and women’s programme are both making plans to be flexible for all situations once international training is allowed under Government guidelines.

Men’s U20 head coach Mike Lynch has had 80 players looking to try out for this year’s team, since the call out in February for interested players to register for trials. Coach Lynch and his staff are in regular contact and accessing player videos for those players that are playing abroad, along with preparing a ‘Return to Play’ strength and conditioning programme. Lynch outlined his future plans: “Once we get word on when and how we can get back on the court, we have plans in place for clinics around the country, to help players prepare for try outs and will then start the preparation work for the FIBA European Championships.” 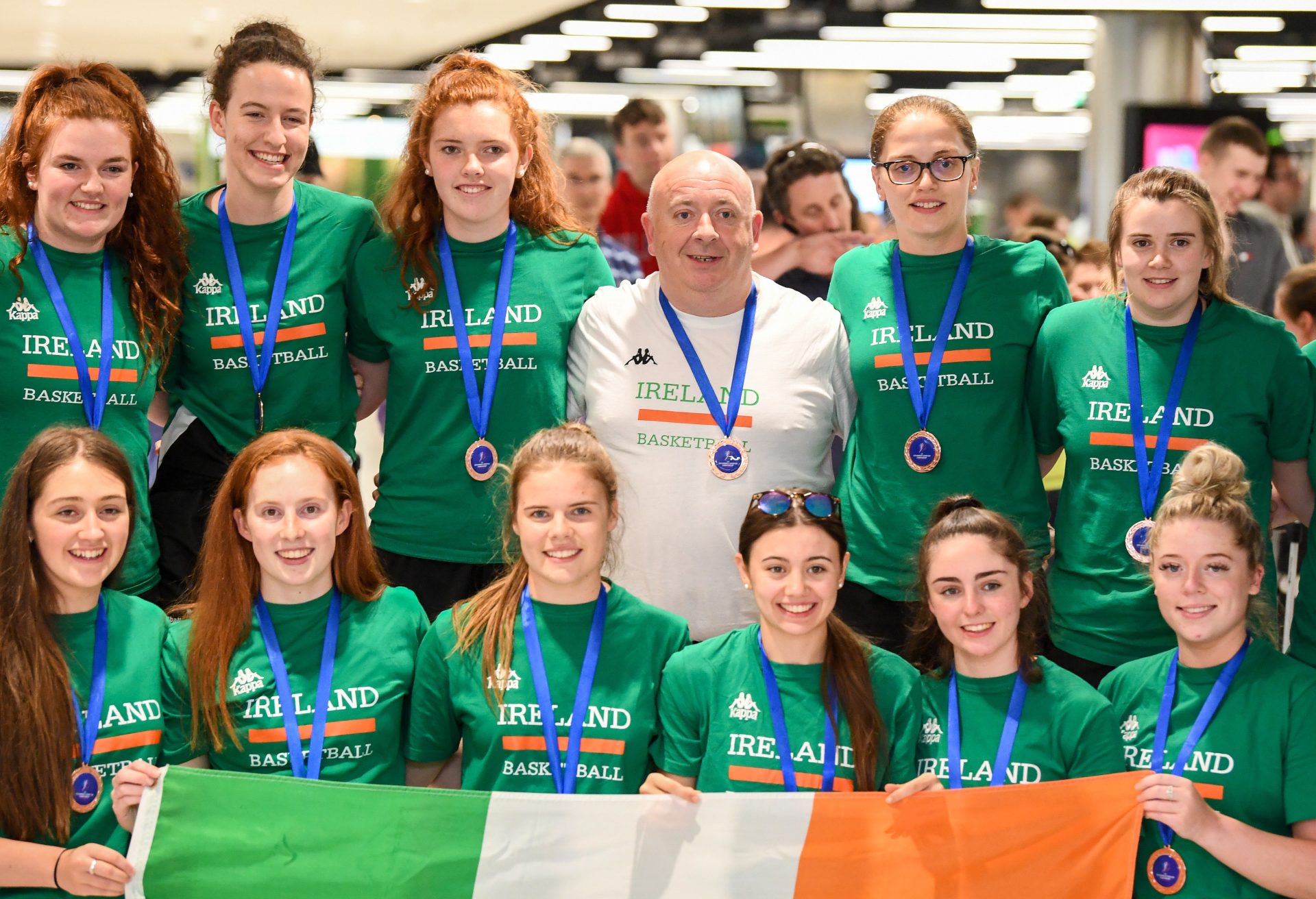 Ireland U20 women's head coach Martin Conroy with 2019 squad, which won bronze at the FIBA European Championships Division B finals, to secure promotion to the 'A' level

Women’s U20 head coach Martin Conroy is delighted with the players that he has available to him this year, as Ireland get set to compete in the ‘A’ level of European basketball for the first time at the U20 age group and only the second time ever. “We have contacted the players to let them know that March should tell us where we stand in relation to getting to practice and what Championships can go ahead, so they are doing their best to stay in shape. We have our last Talent ID date set for May 1st with our final 18-member squad practicing on May 2nd.” Conroy said.

“We have communicated with all players about confirming their intentions and availability for this summer. The coaching staff meetings have mainly been updating ourselves on how things are progressing or not. We’re also keeping ourselves updated on how players abroad are performing”, Keenan stated. 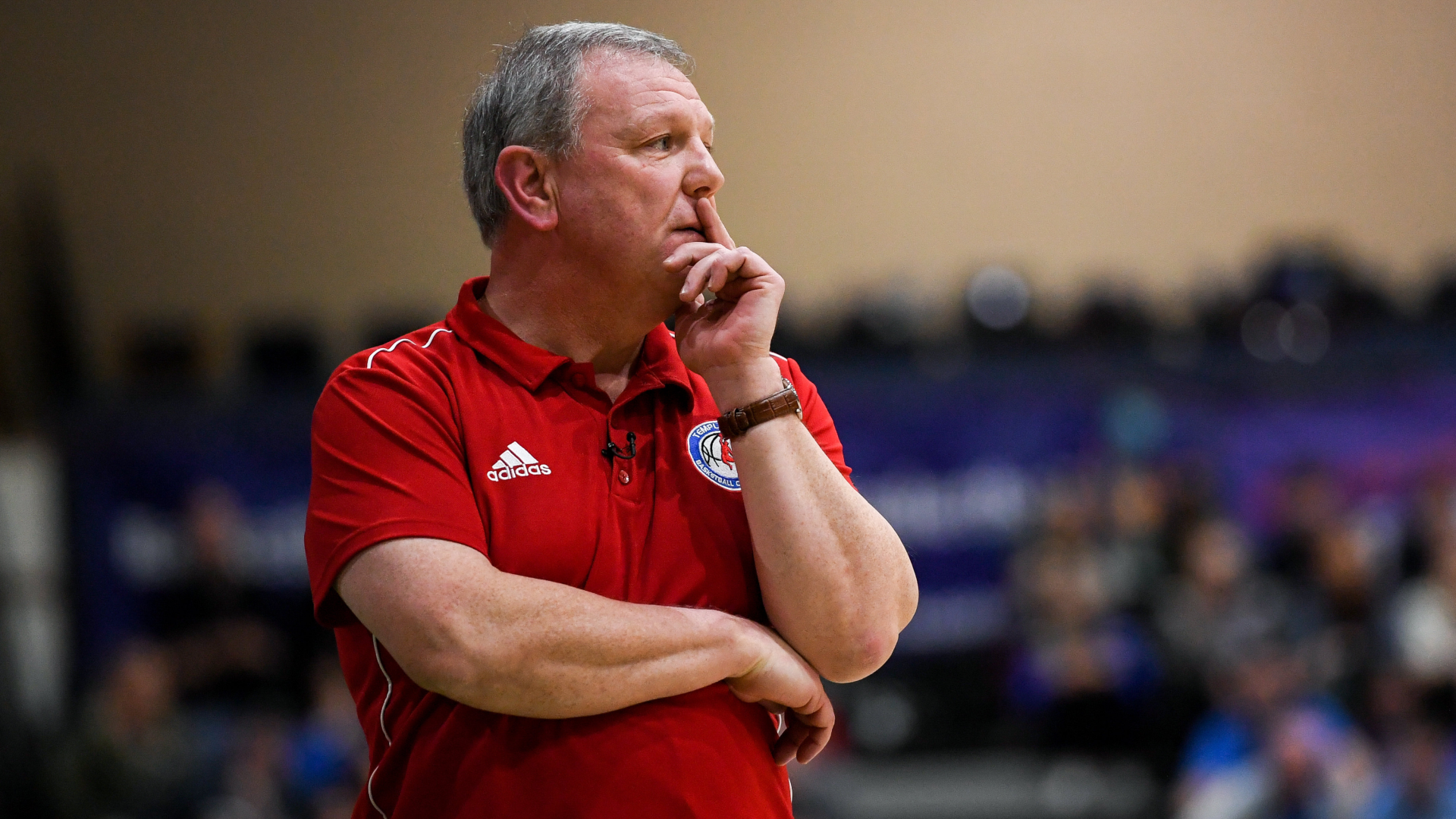 The senior women’s squad, under head coach James Weldon, has been meeting regularly bi-weekly for team video conferences. Weldon explained how beneficial these have been so far: “Our team video conferences have proved practical, effective and powerful for the Irish senior women’s team. It also has the added benefit of giving the players abroad the opportunity to engage and interact with the players and staff here at home. A combination of excellent presentations and team discussion and collaboration on all aspects of the game - namely physiological, psychological, technical and tactical have also proved extremely beneficial to the development of the team. NBA shooting coach Dave Love and NBA skills coach, Drew Hanlen, reflected on their own presentations/sessions with the players and were extremely impressed with the level of engagement and positivity of the team. While we wait for Government restrictions to ease, which will allow the team to start training together again in a gym, we are taking comfort in the knowledge that the team will be both mentally and physically prepared for the challenges that may lay ahead.” 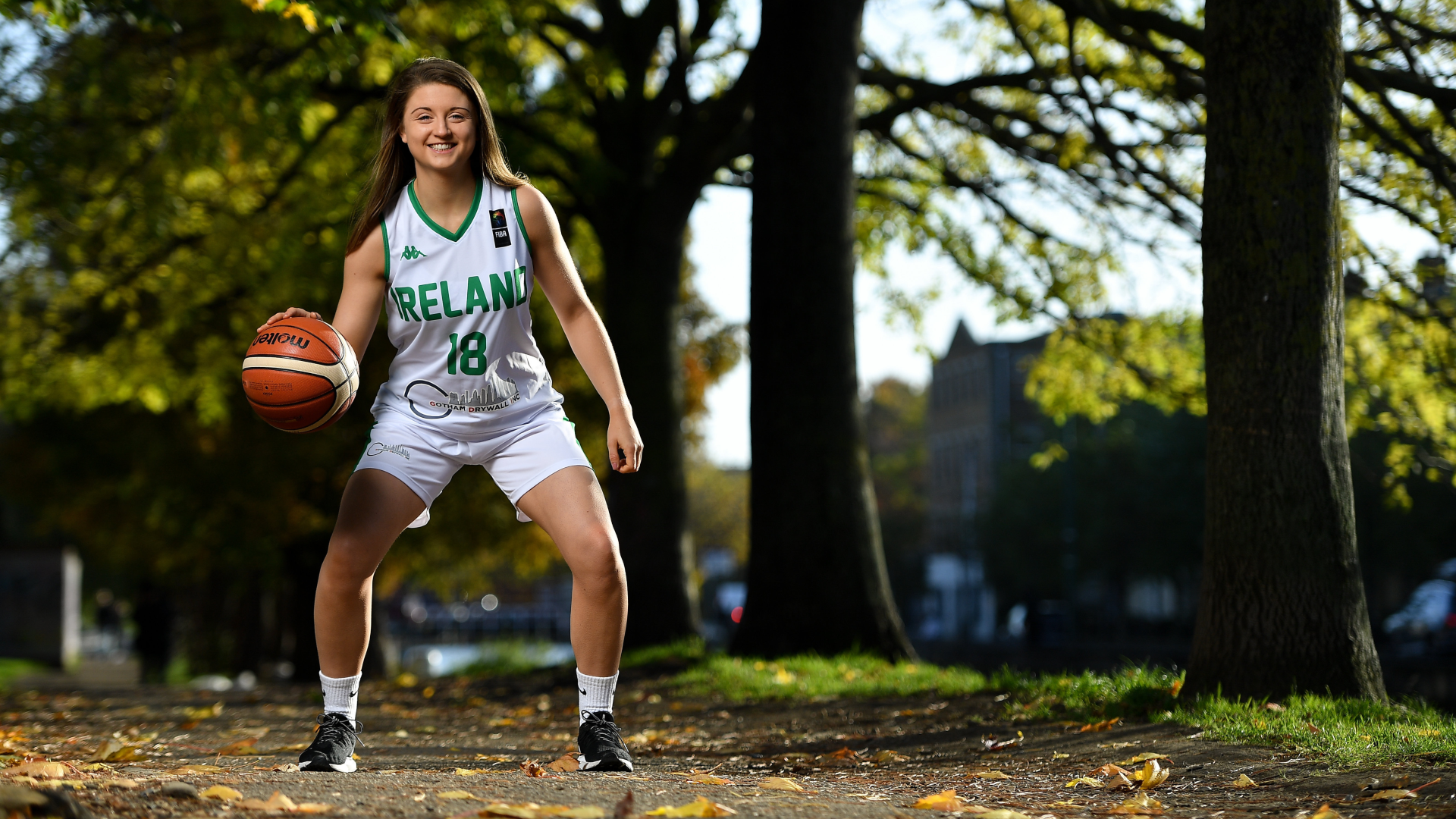