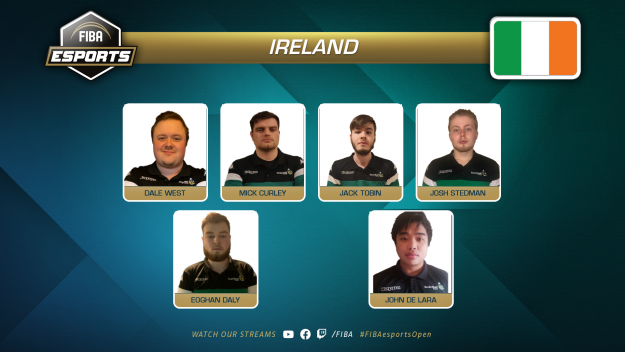 The Irish basketball Esports team were eliminated at the group stage of the FIBA Esports Open III on Friday night, after recording one win and two losses in the Europe Conference ‘Current Gen’ competition.

Ireland’s task was formidable with three consecutive group games, in what was a difficult draw. They faced off against an unknown quantity in Estonia in the first game and Ireland stormed into an early 13-8 lead after the first quarter. A disastrous second period saw Ireland lose the quarter by ten, as they trailed 26-21 at half-time.

John De Lara was scoring well in his debut, he got 11 points to help out top scorer Jack Tobin (14 points) and Eoghan Daly who had an impressive double-double, with 13 points and 11 rebounds. Unfortunately, it wasn’t enough for Ireland, Estonia’s strong fourth quarter helped them steal the game 48-45.

Looking to bounce back quickly, Ireland went up against Poland in the second game of the evening. A great team defensive performance saw Ireland lock down their opponents, as they won comfortably 57-44. Eoghan Daly was again the standout performer with an incredible 28 points and 10 rebounds, while captain Mick Curley added seven points and John De Lara had 10.

The win set up a final game with group favourites Latvia, knowing that a win would see Ireland qualify for the quarter-finals, or a loss combined with a Polish win against Estonia would also see Ireland through.

Ireland started strongly against Latvia, going toe to toe with the heavy favourites. At the end of the first quarter Latvia led 16-11, Eoghan Daly, who was continuing his strong play, grabbed six points in the opening quarter. The second quarter was a poor one again for Ireland, as Latvia showed their quality by extending their lead to 17 points at half-time. Ireland continued to battle hard, Daly got his third double-double of the day with 21 points and 10 boards, but Latvia ran out deserved winners 60-40.

Agonisingly for Ireland, Estonia beat Poland by three points, 62-59, in the group’s last game, which meant that Ireland were eliminated.

Irish Esports team manager, Conor Meany, said: “The guys were desperately unlucky for the second tournament in a row. We had a slow start and narrowly lost a game to Estonia, that we were comfortable in at times. We’re not far off the pace, but we will need to play even more games to ensure that we are ready to go at the start of the next FIBA Esports Open.”