Get to know: Ryan Leonard

Get to know: Ryan Leonard 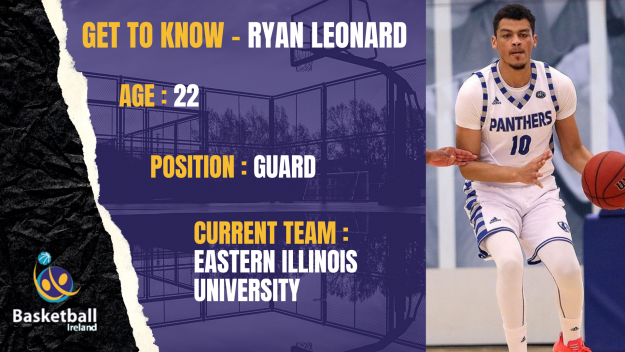 Next up in our 'Get to Know' series is Ryan Leonard, a 22-year-old formerly of Tralee Warriors, who has represented Ireland at underage & senior levels. He now plays Guard for Eastern Illinois University.

How did you get into basketball: “From a young age I was always around the game of basketball because of my dad’s playing career. I just fell in love with the game and started playing as soon as I could.”

Best tip you’d give to an aspiring basketball player: “Control what you can control. Don’t worry about stats or numbers, play the game with a love and passion for it. Always make sure you are being the best teammate you can be and most importantly have fun and enjoy every moment.”

Toughest opponent you have faced on the court: “Eoin Rockall at U16 level. The guy won every golden ball there was that year. Also beat me in the All-Ireland semis off a banked three from the corner.”

Your best moment on a basketball court: “It’s hard to just pick one but I would have to say winning the Champions Trophy with Tralee Warriors my first year in the Super League. Close behind that would be winning the U19 Southwest School title against rivals Mounthawk and winning the U18 National Cup with Fr. Mathews. Getting my first win for Ireland against Luxembourg is also a feeling I will never forget.”

Basketball career goals: “Right now, I am just focused on having a good senior year and helping my team win a conference title. After that, we can see what options are in store to continue on playing. Eventually, I would like to bring a National Cup title back to Tralee.”

Hobbies outside basketball: “I spend the little free time I do have watching Netflix or playing video games.”

Favourite Food: “Anything cooked by my mom. College life really does make you appreciate your mom’s cooking!! (Chick-fil-A is great too though)”

Favourite music band or artist: “Rod Wave is definitely at the top of the list these days, but Drake and Travis Scott are very close behind.”

Your TV series recommendation: “There’s too many but GOT, The Blacklist, Narcos, Ballers and of course nothing beats a classic like Friends.”