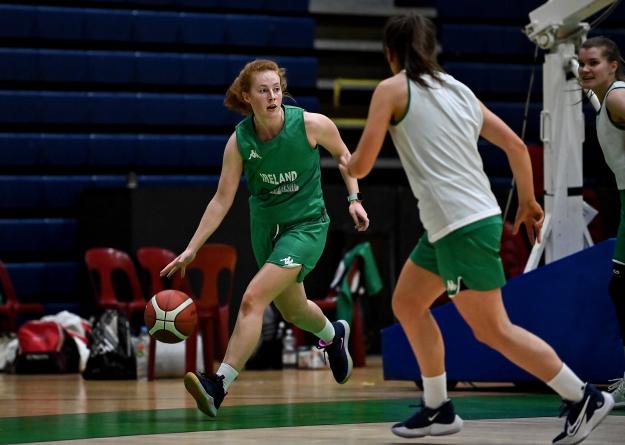 Q. We are just a few days out now from the beginning of the European Championship for Small Countries. What is the atmosphere like in the team at the moment?

The atmosphere in the team is brilliant. Everyone is really excited to get started in the tournament. For most of us, this will be our first competitive game in well over a year so everyone is really looking forward to getting back on the court and back playing competitive basketball!

Q. It has probably been an intense few weeks for the team to get ready for the championship, how ready are you and the team for the upcoming competition?

I think we all feel really ready for the tournament. A huge amount of work has gone in by both the players and the coaching staff to make sure that everyone was ready to go when we eventually got back training together. Since we’ve been back, we have had really high intensity, competitive training which has left us feeling prepped and excited for the tournament.

Q. How does it feel to be a part of this senior Ireland team?

It’s always an incredible feeling to be part of any Irish team but I think this team in particular is hugely talented so it’s amazing to be involved and to be training which such high level players week in, week out.

Q. You recently made another senior debut for Ireland, competing at the 3x3 Qualifiers in Constanta, Romania. How did that feel? What was that competition like for you?

I was absolutely thrilled to get the call up to the 3x3 team. 3x3 is definitely a very different game than 5v5, its much quicker and the tactics can be quite different. The whole set up of the tournament was really cool with it all being outside so it was definitely a great and new experience.

Q. Having been to the 3x3 Qualifiers, you have experience of the current Covid protocols in place at international competitions. How much of an impact do they have on the tournament experience as a whole?

I think the COVID-19 protocols will definitely make the tournament experience a bit tougher. There will be a lot more downtime in your own hotel room without being able to go out for a walk or anything. The 3x3 was obviously a much shorter tournament so I think as a group we will have to be creative with how we are going to fill our days.

Q. The 3x3 Qualifiers didn't go as hoped, but there were some tight results, and good performances from the Irish team. What has been the biggest take away for you from that competition?

We were unfortunate that one or two of the games didn’t go a bit better but it was a really enjoyable weekend and it was just brilliant to be back playing in a green shirt again.

Q. You experienced great success at both U18 & U20 on the European stage, and you're surely hoping to build on that now at senior level. Does that previous success give you confidence going into the championship?

We had some really good tournaments at the underage level over the last few years and I think we will definitely take confidence from being able to prove that we are really capable with competing with some of the really strong European teams. I think it also gives us the motivation to get Irish Senior basketball back up to a higher level where I think everyone in the team believes we belong.

Q. What kind of challenge are you expecting from the other teams at this championship?

It is hard to predict how different teams will look at the championships with no team lists published yet. I’m sure that the teams will all be tough and physical so I think it will be a great challenge for us.

Q. The championship boils down to 3/4 games for you & the team, compacted into less than a week. How tough is it competing at this level with such high intensity. And how important will the days in between be for you?

I think the small numbers of games in the tournament means that we will really have to hit the ground running as we are not really going to have the time to try and figure things out as we go. It is going to be really hot over in Cyprus so I think the extra days in between some of our games will help us get rehydrated and recovered to go for the next game.

Q. It takes a lot of hard work and dedication to compete at this level, could you tell us a bit about the commitment required? Does it ever get difficult to maintain?

There is a huge amount of works that goes in behind the scene to compete, both in the gym trying to improve physically and on court trying to improve your skill level. I think the work is easier to maintain when you start to see progress and are encouraged to keep going. I think being able to plan ahead when you know you’re going to be busy with school / college makes it much easier to balance everything and stay on top of both schoolwork and basketball.

Q. How does it feel to represent your country compared to playing for your club?

Obviously playing for your country is always a huge honour and achievement, and there is always a massive sense of pride in putting on the Irish jersey. Whenever summer rolls around it is always really exciting to be able to compete for a spot on the Irish team and play with some of the best players in the country. I know personally playing with my club team Leixlip Amenities Liffey Celtics is also really special as I get to play with girls I grew up playing with and girls that I grew up watching so there is a real sense of community and family.

Q. The team has a strong mix of newer players, and stalwarts of senior basketball. Do you think this mix works well?

I think this mix works really well – there is a great mix of experience and youth which I believe will really stand to us. The team has really gelled together well over the last number of weeks of training so I think we’re ready to go and compete together.

Q. For you, what sets basketball apart from other sports? What are the key skills that makes a basketball player stand apart?

I think that tactically basketball is very different to other sports. Understanding the game and being able to make the rights reads is probably equally as important in basketball as your physical or technical ability. I think this is some of the reason as to why it is so enjoyable as you really have to think in basketball.

Q. What advice would you give to younger players that hope to represent Ireland in the future?

I think my advice to any younger players would be to take pride in your work ethic and attitude. Unfortunately you can’t control how a coach sees you or what their vision is for the team and every year there are a lot of good players who don’t make an Irish team. However, you can always control how hard you work and your attitude towards the game and I am a big believer that hard work always pays off – even if it might take longer for different players.