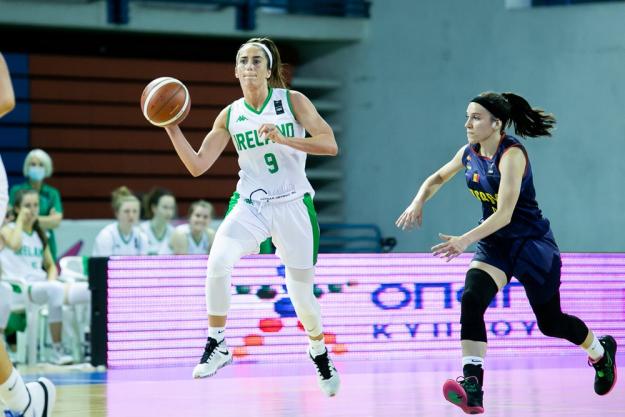 Ireland have kicked of their FIBA European Championship for Small Countries campaign with an impressive 71-point victory over Andorra. The game, played in Nicosia, Cyprus, marks their return to international basketball after a Covid-induced hiatus since 2019.

It was an impressive start for Ireland against Andorra, after Rachel Huijsdens won the jump ball, Dayna Finn scored the first four points of the game, with a free-throw and converted ‘and one’. After a steal from Edel Thornton, Fiona O’Dwyer made another layup, putting Ireland eight ahead. Combined offensive efforts from Dayna Finn, Edel Thornton, Claire Melia and Rachel Huijsdens brought Ireland to a 17-0 lead, before a 3-pointer by Andorra’s Cristina Andres Rabasa put them on the board.

An impressive defensive display from Edel Thornton in this quarter was exemplified by her three steals, and Gráinne Dwyer quickly made her presence known when she was introduced halfway through the first quarter, with a steal and offensive rebound. A layup from Cristina Andres Rabasa, and a jumpshot from Claudia Brunet Solano were the only other scores made by Andorra in the opening quarter. 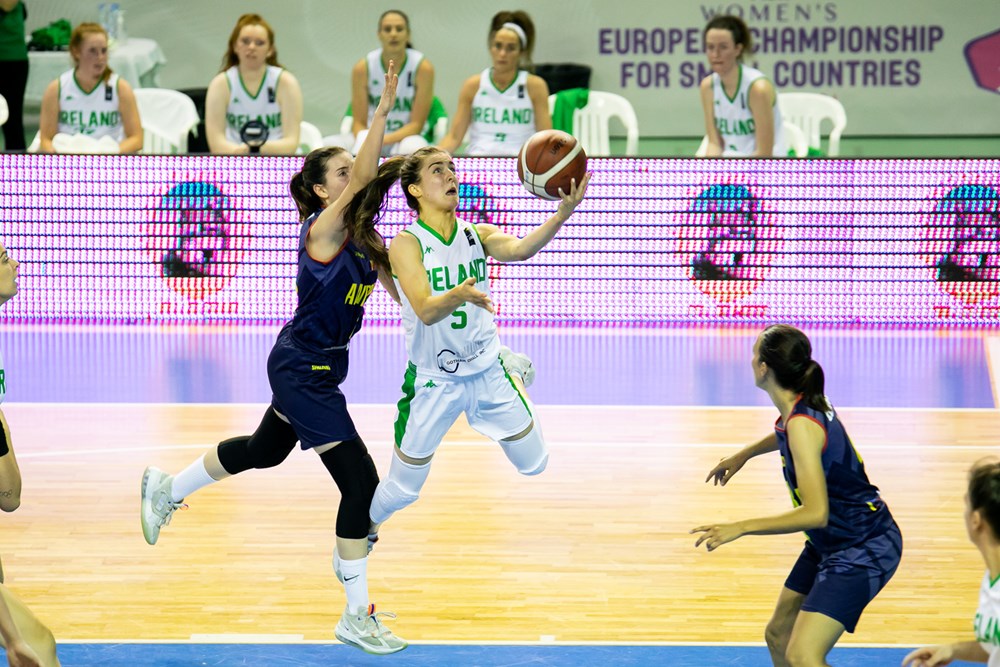 Dayna Finn goes for a layup against Andorra

The second quarter proved to be Ireland’s most impressive, with the team notching 32 points in these 10 minutes. Claire Melia scored an early lay-up with the assist from Rachel Huijsdens, and followed this with a defensive rebound that lead to a 3-point jump shot from Fiona O’Dwyer, assisted by Sorcha Tiernan. 40 seconds later, Tiernan assisted O’Dwyer with another 3-pointer. Tiernan recorded three steals in the quarter, the third converted with a layup. Andorra struggled to keep up in this quarter, recording just six points, all from layups; two from Noah Mico Lorenzo, one from Cristina Andres Rabasa. It was Ireland’s defensive efforts that set them apart as a whole, with many scores resulting from defensive rebounds. Aine McKenna managed to beat the buzzer with a jump shot to put Ireland 60-18 ahead at end of the half.

Dayna Finn got the scoring underway in the 3rd quarter with a layup, following an offensive rebound from a missed Fiona O’Dwyer jump shot. Andorra responded in kind with a layup from Noah Mico Lorenzo. Strong defensive play from Edel Thornton and Rachel Huijsdens really put the pressure on Andorra, causing errors. Another impressive steal under the basket from Sorcha Tiernan also resulted in a layup. Ireland scored 13 points unanswered in the middle of the 3rd quarter.

Despite trailing by a broad amount, Andorra maintained their efforts for the duration of the game. A 3-pointer from Michelle Clarke was instantly responded to by one of her own from Andorra’s Cristina Andres Rabasa. However the impressive defensive and counterattacking play from Ireland was ultimately too much for Andorra. It was Gráinne Dwyer who broke the 100 points mark for Ireland, scoring a layup on a offensive rebound. Hannah Thornton maintained the defence with a steal and defensive rebound. Ireland enjoyed a wide spread of scoring in the game, with every player making it onto the board, but it was Dayna Finn who rose to the top with 14 points. 36 defensive rebounds and 27 offensive rebounds total showed the drive of the Irish team to persist for each basket.

Following the game, Ireland assistant coach Jillian Hayes said:” I think our defence set the tone for the game. Everyone contributed to the defensive end and offensive end. Defensively we were tenacious on the floor, we set targets for ourselves defensively and we achieved them. We are quite aware that there is tougher competition coming up, and we have the next two days to work on them. Happy and looking forward to a tougher game.”

Ireland face Malta next in their second group game of the championship, which takes place on Thursday 22nd July (14:00 Irish time).