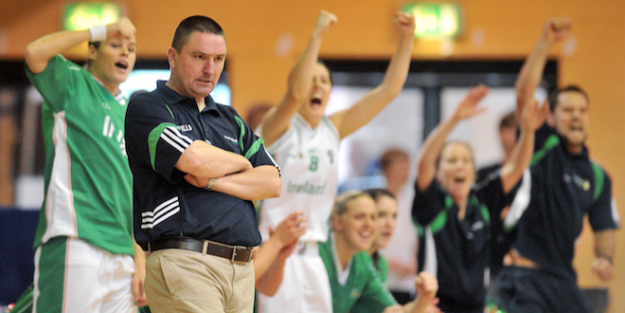 The Womenâs National League Committee of Basketball Ireland have appointed Mark Scannell as Head Coach of the Ireland Senior Womenâs side for the European Championship for Small Countries in 2016.

âItâs a massive honour,â he said. âWe were in a good place before the programme was stood down and this competition is the right starting point on the road back.â

With a squad including former WNBA player Susan Moran, Irelandâs last campaign saw them go close to qualifying for Europeâs âAâ Division for the first time. The European Championship for Small Countries is open to countries competing in Division âCâ of European basketball.

âThereâs a generation of players whoâve been missing out and it will take a lot of commitment to get everyone up to speed. That means a player led programme where thereâs plenty of opportunities for the younger generation and the more experienced players are needed to bring things along.â

Womenâs National League Committee Chair BrÃ­d Kenny said âWe also need to look at structures around sponsorship to make sure no one is out of pocket for representing their country. We can offer young people the chance to play for Ireland at the highest level and not many can say that.â

Scannell is Head Coach of reigning league and cup champions Team Montenotte Hotel. He first took over the Glanmire side in 2006 and returned to the club last season after a two-year spell in the Menâs Premier League with Neptune.

Further staff appointments will take place over the coming weeks with the expectation of activity over Christmas and the first mid-term break of 2016.

World Governing body FIBA are expected to announce dates and participating teams for the European Championship for Small Countries on November 30th.