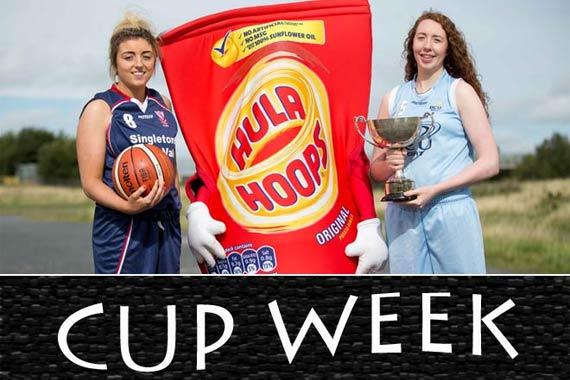 Itâs that time of year again. A time for wishing. And hoping. And dreaming. Win three games and you could be a Hula Hoops Womenâs National Cup champion. Four wins could bag you the menâs trophy. What team in the country wonât believe they are capable of that

The menâs format is truly unique. Where most major basketball competitions run a playoff format, this weekend will see Round One of the Hula Hoops Menâs National Cup decided on an aggregate score over two legs. The average margin after the first leg is 20 points, but plenty of drama is to be expected nonetheless.

Itâs the first major weekend of Womenâs Cup action after a preliminary round saw Singleton SuperValu Brunell past Portlaoise Panthers. Division One, underage and non-league clubs are also out in force this weekend with a full preview to follow.

C&S UCC Demons: âWeâve thrown away a 30 point lead before in a quarter-final so letâs hope history doesnât repeat itself. The Hibernia lads have a bit of a spring in their step at the moment. You can see that the extra sessions are really benefitting them. Once we get through this week now with Hibernia and the cup, weâve basically got a three week long mini pre-season to get us ready for the second half of the season.â Colin OâReilly (Player Coach)

UL Eagles: âEvery chance we get to play basketball is a chance to get better. Weâll be working on our offence and defence. Demons are such a good team that you can only improve by playing at that level.â â Staats Battle (Player)

Pyrobel Killester: âWe just want to get out and get a good start. We didnât against UL but we did the week before against Eanna, played our game and dug in on âdâ so I think thatâs all weâve got to concentrate on â a good performance and the rest should take care of itself.â - Alan Casey (Player)

Belfast Star: Weâre going to play one of the best teams in the country at the moment in a Killester team who are third place in the league. Being honest, Iâm hopeful Paul Dick isnât back up to full speed because in my opinion when he is heâs the best in the country. Weâll be playing this game three or four minutes at a time and if we can give ourselves a chance going into the fourth, we canât ask for more.  - Neal McCotter (Head Coach)

DCU Saints: Beating them in the League has done a lot for the confidence but itâs still a big ask. Weâve just to improve again. If we could actually take a double digit lead it could make a bit hairy for them and change the psychology of the game but the big thing really though is a good performance. Itâs league results we need at the moment. Joey Boylan (Head Coach)

UCD Marian: âWe've had two losses in the league in the last two weeks so we're really looking to get back to winning ways this weekend. I'm hoping we'll learn our lessons from losing to DCU in the league and definitely hope we'll learn from losing to Demons two years ago. It was a 31 point margin in that game as well. I want to see a reaction from the players. We're going over there to win the game.â â Ioannis Liapakis (Head Coach)

GCD Swords Thunder: âEvery game is a pressure-cooker at the moment. Weâve shown in stages that we can compete with any team this year but thereâs stages where we could lose to any team too. Weâll have to focus, even with the 19 points.â â David Baker (Head Coach)

Eanna BC: âThe team is upbeat but could do with a good performance. We are hoping to show signs of improvement over recent poor form in the league. We play them again the following week so we'll see it as a warm up to that game. We could really do with a win before Christmas.â â Ciaran MacEvilly (Head Coach)

SSE Airtricity Moycullen: âWe went down to 20 at one stage in the third [in the first leg] but really dug deep in the last few minutes to give ourselves a fighting chanceâ - Nollaig Cunningham (Head Coach)

Team Montenotte Hotel: Brunell know us as well as we know Brunell. Itâs going to be a very tough game. The tradition in Glanmire is the Cup and this is our only opportunity. For the first time in about 10 years, both our U18s and our U20s are out of the cup. Thereâs huge pressure on us now because we have to make sure that Glanmire are represented, but we canât underestimate the challenge of Brunellâ. - Mark Scannell (Head Coach)

Singleton SuperValu Brunell: Itâs down to a local derby. Itâs down to 40 minutes of basketball and anything can happen. Hopefully it will be a good game of basketball To be quite honest, weâll have to be at 110% and theyâll have to be below par. Weâre not a big scoring team at the moment but if we play defence and keep teams below the 70 point bracket, weâre in with a chance. Kieran OâLeary (Head Coach)

Meteors: "The two teams are neck and neck in the league table. We played against each other in a very close game in pre-season up at the Arena so weâre expecting a good tough battle. Theyâve a lot of good strong experienced players and theyâve a good track record in knowing how to win basketball matches. Weâll need to be at our best." - Mark Byrne (Head Coach)

UL Huskies: âThis is one where weâll look to compete. Weâve yet to play them this year. Theyâre a young team like ourselves. Their American players are very good and now theyâve some of their local players back so theyâre very strong. We needed that first win to set us up. The players are focused and we want to do our bestâ - Des OâSullivan (Head Coach)

DCU Mercy: "Weâre looking forward to that one. We didnât play any defence in the last game against them. Hopefully now weâll be a bit better in the Cup. It should be a good test. There was a bit of turmoil there [The loss of Maleeka Kynard] and it was upsetting for the girls. Obviously we put a lot of faith in her, she was running the team for us. Other people have to step up in that position that havenât been playing there.â - Mark Ingle (Head Coach)

Pyrobel Killester: "The cup is very special in Irish basketball. This is a tough match up against a side that are top of the league but results don't matter in the cup. All that matters is who turns up on the night, who executes on offence, who gets stops on defence and who wants it most. We're really looking forward to Saturday night." - Karl Kilbride (Head Coach)