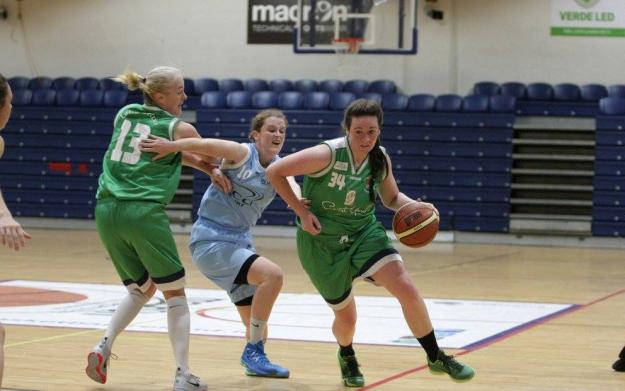 #BIMPL on Demand: Watch Pyrobel Killester v Templeogue BC at http://bit.ly/Temp-Kill
#BIMPL on Demand: Watch DCU Saints v C&S UCC Demons at http://bit.ly/DCU-UCC
Thunder Roll into National Cup Semis
The draw for the Hula Hoops National Cup Semi-Finals is now complete with three more teams through to the penultimate round in Cork on the second weekend in January.
GCD Swords Thunder knocked out UCD Marian on Friday night with a 10-point win. 2015 finalists Marian led for the first time early in the final quarter but Thunder iced the win with nine successes from their last 10 free-throw attempts.
âThis was the team we lost to in the semis last year,â said Swords Coach Dave Baker. âWeâve had a shaky start to our league campaign so getting to the semi-finals is huge for us.â
Fr Mathewâs saw off BFG Neptune in an all Division One clash in the Presidentsâ National Cup while Maree made home court advantage count against Tralee BC in the U18 Menâs Competition.
Templeogue are now six points clear at the top of the Menâs Premier League after an 82-80 win over Pyrobel Killester in the Menâs Premier League. The unbeaten Dubliners led for the majority of the game but had to fend off a fourth-quarter comeback from the third placed side.
DCU Saints pulled off a stunning 100-90 win against C&S UCC Demons. âWe scrambled really well to get to their shooters and then we controlled our own boards which led to fast-break points,â said DCU Saints Coach Joey Boylan. âIt makes for a nice Christmas present.â  An 18-0 run down the stretch secured UL Eagles a rousing win over SSE Airtricity Moycullen. Belfast Star stayed sixth win Saturdayâs win over GCD Swords Thunder.
In the Womenâs Premier League, Team Montenotte Hotel played their best basketball of the season to beat Pyrobel Killester and move into second place. 30 points in the second quarter ensured an 85-62 win while Meteors are up to third after winning at Portlaoise Panthers.
Singleton SuperValu Brunell pulled off an overtime win against the in-form Maxol WIT Wildcats. âTheir basket went in and we missed and that was it,â said Wildcatsâ Sinead Deegan. âThey got one back on us because we could say we stole the win when we played them down in Cork.â DCU Mercy will top the table for Christmas after their 62-53 win at home to Courtyard Liffey Celtics.
Sunday December 20th
Menâs Premier League: DCU Saints 100, C&S UCC Demons 90; Pyrobel Killester BC 80,Templeogue BC 82
Womenâs Premier League: DCU Mercy 62, Courtyard Liffey Celtics 53.
Womenâs Division One: Oblate Dynamos 54, Fr. Mathews 63; Marble City Hawks 38, Team Garvey's Tralee 42.

#BIWPL highlights from Team Montenotte Hotel's win over Pyrobel Killester yesterday. All the action is from a pivotal first half. This week's Game Zone is at http://bit.ly/Dec-16-20

GCD Swords Thunder game through Round Two of the Hula Hoops Men's National Cup for the second time with an 80-70 win over UCD Marian at the ALSAA. The home side got off to a fluid start and led all the way to the 28th minute before Dan James levelled the game at 48-48 for UCD Marian. Marian led with seven minutes remaining as Dustan Moreira drove his way past 20 points but Thunder's patience and crisp passing opened up the opportunities and forced UCD Marian to give up fouls with the clock ticking. Thunder iced win with nine successes from their last ten free-throws.

GCD Swords Thunder booked their place in the #HulaHoopsCup Semi-Finals tonight. This week's Game Zone is at http://bit.ly/Dec-16-20

Templeogue BC beat Belfast Star at the Oblate Hall to move to the top of the Basketball Ireland Men's Premier League. The home side applied the pressure in the third quarter to push the lead out to 20 points. Michael Bonaparte finished with 29 points with Conor Grace chipping in 20.