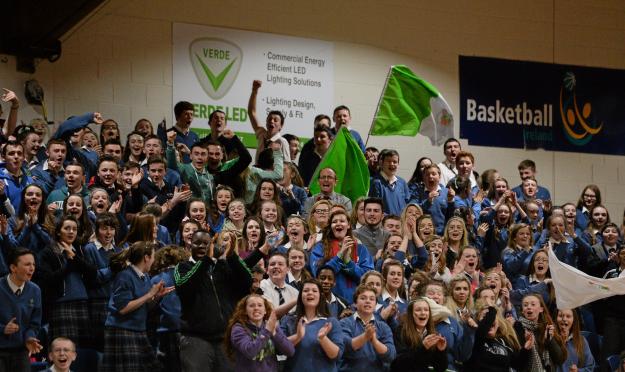 SUBWAYÂ® All Ireland Schools U19A Girls Cup Final
Ard Scoil Rathangan 69, Holy Faith Clontarf 66
National Basketball Arena
Claire Melia lit up the National Basketball Arena as Ard Scoil Rathangan claimed the SUBWAY U19A Girls All-Ireland Schools Cup with a 69-66 win over Holy Faith Clontarf. The gameâs MVP scored 36 points, grabbed as many rebounds and iced the win with her 20th successful free-throw after Holy Faith leveled it from the three-point line with a minute left.
âI thought we were up the creek after that three-pointer,â said Rathangan Coach Paddy Donovan. âIt was up and down and just a case of hanging in their, but everyone knew their jobs.â
An early lead was crucial for confidence Rathangan earned it with baskets from Kelly-Anne Scully, Aine Nash and Niamh Burke. Holy Faith were right in contention once Saoirse Power Cassidy got her eye in from the three-point line. The first of her four triples reduced the gap before Sinead Byrne put Rathangan on their way to a 22-17 lead for the first quarter.
Holy Faith Clontarf were lightning quick on the ball as they looked to stretch Rathangan in transition. On defence they were uncompromising. Deborah Sealy was raw hustle with Meave OâSeaghdha assigned to keep Melia in check. That only sent Melia to the free-throw line to eke out a 10-point lead shortly before she was double-teamed.
Holy Faith halved the deficit by half time and took the lead for the first time in the third quarter. Mae Creaneâs triple was the breakthrough with 2:30 to the break - the Irish international clenching her fists as 350 Clontarf rose to their feet.
It was Meliaâs dazzling spin and hook shot that regained the lead for Rathangan and quick finishing from Scully and substitute Alanna McLoughlin  put enough on the board to sustain them through a Clontarf fight back.
Holy Faith Clontarf Head Coach Jerome Westbrooks said: âThey played well and went to their strengths. We knew we had to face up to Melia, but we had our chances. Itâs disappointing.â His day had started out with victory for their U16A side. âNaturally we wanted to walk out of here with two wins, but the principle said one out of two isnât bad.â
Holy Faith, Clontarf: Aisling Carberry, Saoirse Power-Cassidy 25, Tiffany Brockman, Maeve McDermott 2, Ciara Curran. Substitutes: Deborah Sealy, Ruth Fennell 11, Sarah Malone, Niamh Corry, Maeve OâSeaghdha 2, Alison Connolly 9, Mae Creane, Bronagh Power-Cassidy 8, Niamh Kenny, Elizabeth Black.
Ard Scoil Rathangan: Kelly-Anne Scully 14, Aine Nash 3, Claire Melia 36, Niamh Burke 1, Sinead Byrne 12. Substitutes: Alanna McLoughlin 2, Laura Dempsey, Emma Doolin, Dominika Sygnowska, May OâBrien.
MVP: Claire Melia
HT Holy Faith 33, Rathangan 37

SUBWAYÂ® All Ireland Schools U16A Boys Cup Final
Holy Faith Clontarf 61, Scoil ChrÃ­ost RÃ­ Portlaoise 20
National Basketball Arena
Holy Faith Clontarfâs U16A Girls side proved too strong for Scoil ChrÃ­ost RÃ­ of Portlaoise at the SUBWAY All Ireland Schools Cup finals, winning 61-20 at a raucous National Basketball Arena.
Head Coach Jerome Westbrooks said: âWe said to the girls not to let the occasion get to them and go out there and have fun and thatâs exactly what they did.â The former Ireland international, who turns 60 in November, was also coach of Holy Faith Clontarfâs U19 side and is still actively playing with Killester.
The Dublinersâ quick and accurate ball movement exploited any gaps in the midlandersâ 2-1-2 zone defence and Bronagh Power Cassidy had 13 points up by half time with Meave OâSeaghdha on 10. Elizabeth Black had the handling skills to beat the press by herself and went past four players to finish to in the first quarter.
Portlaoise got their first open basket through Alice Dunne and Erone Fitzpatrick found the only chink in Holy Faithâs defensive armour with a bank shot from the top of the key.
Holy Faith had done enough to lead 33-8 at half time but ChrÃ­ost RÃ­ tripled their own tally in the third quarter. Fitzpatrick hit a pair of threes either side of a neat euro-step from Maeve Phelan and good rebounding work from Emer Healy.
The cushion was still enough for Westbrooks to run his bench, mindful of preserving his dual players for the U19A finale. Fitzpatrick slalomed her way to the paint for a superb basket in the third but Clontarf had the last say when substitute Aine Walsh pulled up to beat the buzzer for the final score.
Portlaoise were returning to âAâ standard under Pat Critcheley. âSometimes you have to take that kind of game on the chin,â said the basketball coach and 1985 hurling All-Star. âThe main thing is that we know what the standard is like now and we can be ready for it the next time out.â
Scoil ChrÃ­ost RÃ­, Portlaoise: Erone Fitzpatrick 13, Maeve Phelan 4, Alice Dunne 2, Ailbe Griffin, Amy Byrne 1. Substitutes: Sophie Delahunt, Leah Dowling, Emer Healy, Maria Luttrell, Jasmin Burke, Maria Carroll, Ellen Connolly, Sarah Fleming
Holy Faith Clontarf: Bronagh Power-Cassidy 13, Niamh Kenny 7, Elizabeth Black 12, Niamh Corry, Maeve OâSeaghdha 18. Substitutes: Aine Walsh 5, Aoibhe Cunningham, Sarah Browne, Kim Clarke 2, Katie Doyle, Rebecca Dodd, Ciara Owens, Emma Crumlish, Laura Owens, Niamh Hetherton 4, Grainne Perryman
MVP: Elizabeth Black
HT: Scoil ChrÃ­ost RÃ­ 5-33 Holy Faith