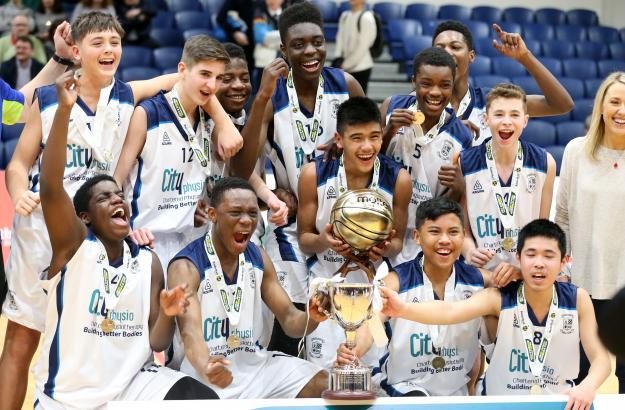 Double Delight for Donegal as Colaiste Choilmcille Ballyshannon win the U16B Girls All-Ireland title. All the Subway Schools All-Ireland Cup action from today is at http://bit.ly/Subway-Schools

SUBWAYÂ® All Ireland Schools U16C Girls Cup Final
Abbey VS Donegal 35, St. Aloysius Carrigtwohill 25
National Basketball Arena
Abbey Vocational School of The Glebe in Donegal Town claimed the Subway All-Ireland Schools U16C Girl Cup with a 35-25 win over St. Aloysius of Carrigtwohill at the National Basketball Arena.
Winning Coach Orlagh Carr said: âThe girls were tremendous in the build up. It all comes down to the training really. Theyâve been out there three times a week since the start of the year and it all worked out on the day.â
Both schools brought sets of fans in full colour and voice. It made for a raucous opening and the adrenaline was pumped into defence with the scoring low in the early exchanges. For Abbey VS, defence would be a feature in the game. They made the most of their wingspan with fingers outstretched and solid rebounding from the likes of Eilish McGovern. Grainne Twomey led the scoring for St. Aloysius and fought hard for an offensive rebound to level the scores at 4-4. It took good shooting from Ellie Muldoon and Sophie Carr to push Abbey out to 8-4 for the first quarter.
Ellie Muldoon responded soon after but it was the second quarter where Abbey tipped the game in their favour. They scored 12 points without reply as Carr dictated things from point guard and Ellie Muldoon kept the scoreboard rolling with the help of substitute Aine McGroarty.
The run went through the half and topped out at 16 points for Abbey VS to lead 26-7. That prompted St. Aloysiusâ best spell in the game. Latisha Moriarty snapped the run and Chloe Barry and Orlaith Duggan followed up as the Cork girls went on a streak of their own.  It was enough to bring the score back to 29-17 heading into the final quarter.
Grainne Twomey was working hard to bring her teammates into the game and Ellen Baker brought the margin back to 10 points with three minutes left. The Abbey VS zone defence was getting harder to move around and that was as close as St Aloysius got.
Abbey Vocational  School: Fiona Shovlin, Sophie Carr 12, Ellie Muldoon 10, Anna Campbell 2, Eilish McGovern 7. Substitutes: Elizabeth Mackle, Orla Histon, Anna Griffin, Aine MGroarty 4, Rebecca Cadwell, Amy Lorinyenko, Niamh Histon
St Aloysius: Abbie Delaney, Grainne Twomey 13, Ciara OâGorman, Latisha Moriarty 2, Ellen Baker 4. Substitutes: Chloe Barry 2, Kate Bourke, Lucy Cashman 2, Lisa Omorogbe, Ciara OâGorman, Orlaith Duggan, Clodagh Tibbets, Louise Horgan
HT: Abbey VS, Donegal 20-8 St Aloysuis
MVP: Eilish McGovern

SUBWAYÂ® All Ireland Schools U16A Boys Cup Final
ColÃ¡iste PhÃ¡draig Lucan 45, St. Malachyâs College, Belfast 44
National Basketball Arena
ColÃ¡iste PhÃ¡draig Lucan are the Subway All-Ireland U16A Boys Cup champions after a tense 45-44 win over St. Malachyâs College of Belfast. MVP Kris Arcilla shook off a stomach bug to what turned out to be the game-winner but there was still plenty of time for drama before the final buzzer.
âIâve had a few matches like that over the yearâs but that one takes the biscuit,â said winning Coach David Gray. âIt was serious stuff. â
St. Malachyâs needed longer to settle and were 4-0 down before Peter Henvey and Conor Cooke gave them the lead for the first time. By then the Lucan boys had set out their stall with electric guard play, hard work under the basket and a scoring touch from Samuel Mohamed. Malachyâs earned a 9-8 lead with the last basket of the quarter â a deft assist from Jack Summersgill freeing up Cooke for a layup.
ColÃ¡iste PhÃ¡draig put up the first significant run of the game to turn a three-point deficit into a six point lead in the second quarter. Max Amadasun was simply dominant with blocks and rebounds so St. Malachyâs withdrew to the perimeter in search of open looks. CJ Fulton made it count with a deep-two and a triple to snap the run.
Arcillaâs electric pace was yielding free-throw opportunities and the young point guard gave CPL a 19-17 lead for the half.
St. Malachyâs showed a more patient approach in the third quarter. Conor Ryan hit an open three-pointer for a five point lead.  ColÃ¡iste PhÃ¡draig trailed by three heading into the final quarter and leveled the game with five minutes left through control on the offensive boards and a fast break from Kabir Akanbi.
St. Malachyâs seemed to have found another gear when Niall McGinnity upped the ante on defense and Fulton hit a nerveless buzzer beater. They were sooned pegged back by Akanbiâs deep two and Arcilla made it 45-44 with six seconds remaining.
A monster block from Amadasun rejected St. Malachyâs first attempt at a game winner. They thought theyâd done it when Matthew Mulholland found the net but his last gasp attempt was a fraction too late.
St. Malachyâs College Belfast: CJ Fulton 9, Matthew Mulholland 2, Peter Henvey 12, Conor Cooke 5, Niall McGinnity 7. Substitutes: Diarmuid Maguire, Conn Doherty, Jack Summersgill 6, Conor Ryan 3, Cormac OâRourke, Michael Lavery, Kevin Tenizo, Aidan McGeown, Daniael Hackett
Colaiste Padraig Lucan: Brian Monaghan 7, Joy Chen, Kris Arcilla 11, Samuel Mohamed, Max Amadsun 16. Substitutes: Daniel Adeosun, Izzy Syamhie, Stanislus Igboeli, James Kebana, Gavin Nestor, Kabir Akanbi 7, Samuel Mohamed 4, Jack Tighe
MVP â Kris Arcilla
HT â St Malachyâs 22, Colasite Padraig Lucan 16

SUBWAYÂ® All Ireland Schools U16B Boys Cup Final
De La Salle Waterford 68, St. Peterâs Dunboyne 35
Waterfordâs representatives at the Subway Schools All Ireland Cup Finals put on a winning performance as De La Salle beat St. Peterâs Dunboyne 68-35 in the U16B final at the National Basketball Arena.
âThe lasts just needed to play to their potential for us to be okay and they really did,â said De La Salle Coach Dean Kavanagh. âWe tick all the boxes with the positions on the floor. Weâve guys who can get rebounds, run the floor and get scores. It really stood to us.â
St. Peterâs Dunboyne came into the game with Cup final experience as U16C Cup champions from 2015, but it was De La Salle who had the brighter start. Finn Hughes got the Meath side into the game with a couple of close-in baskets but De La Salle were taking the right options and two buckets from Scott Dunphy put them ahead 13-6 for the first quarter.
Angel Agharia showed great acceleration for a baseline drive which pushed out De La Salle in the second quarter and they called time out midway through with a 21-11 lead. Good rebounding from Michael Ajala kept St. Peterâs in touch and Ajala had the gas to take down a rebound at one end and finish right-handed on the other. Jack Sweeney had sevens point in the first half for St. Peterâs before Jay Kavanaghâs teed up Osi Oshiojwemoh with the drive and dish to make it 25-13 for De La Salle at half time.
An 11-0 run in the third quarter put De La Salle firmly in control. Coach Dean Kavanagh had his squad ordered to exploit any weaknesses in transition. It was a mix of speed of foot and quality of passing and it was worth a 21 point lead. St. Peterâs took a time out and upped the defensive intensity through Sean Ryan. They still trailed 46-22 heading into the fourth.
St. Peterâs looked to hit the fast-break themselves in the final period. It opened up the game and allowed Ajala, Sweeney and Hughes to go on a run. Hopes of a comeback faded as the fouls started to mount up and Chris Malone and Jack Sweeney three-pointers in the final minute.
De La Salle, Waterford: Jay Kavanagh 7, Angel Agharia 15, Scott Dunphy 9, Seaghan Walsh 12, Osi Oshiojwemoh 12. Substitutes: Shane Roche 1, Daniel Dollard, Kieran Murphy 1, Nikita Kudrovs, Chris Malone 5, Harry Clooney, Cian Mongey 2, Kalem Walsh
St. Peterâs Dunboyne: Finn Hughes 9, Jack Sweeney 19, Sean Ryan, Claudio Mkandla, Rian OâLoughlin. Substitutes: Carlos Mkandla, Morgan McQuid, Michael Ajala 5, Dylan OâReilly, Ola Akinbohan, Liam Murray 2, Christian McDermott
HT: DLS Waterford 25, St Peterâs 13
MVP: Jay Kavanagh (De La Salle)