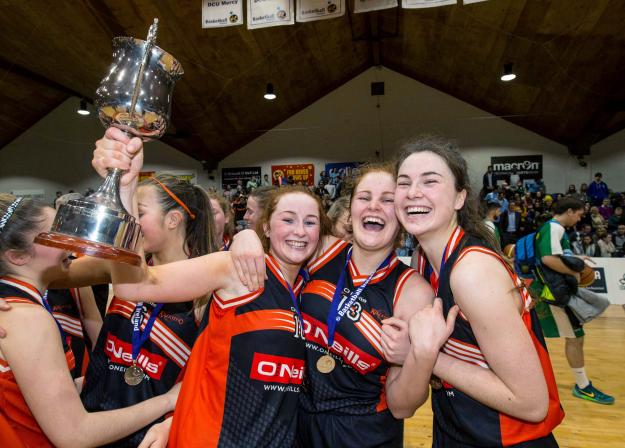 GAME ZONE: Hula Hoops National Cup Finals 2016
January 30, 2016
Hula Hoops U20 Womenâs National Cup Final
Pyrobel Killester 60, DCU Mercy 49
National Basketball Arena
Pyrobel Killester secured a first ever Hula Hoops U20 Womenâs National Cup title with a 60-49 defeat of DCU Mercy. It was the first of two appearances for a raft of players on the floor with DCU Mercy back out for the U18 National Cup final and four Killester players taking part in Sundayâs Womenâs National Cup decider.
Killester U20 Womenâs Coach Aisling Sullivan said: âWe started out shaky and that was definitely the nerves but we made a few shots and got a few steals and really eased into our game. DCU made a game of it, but we knew exactly what we wanted to do and the girls did exactly what was asked of them.â
DCU Mercy looked to have the edge on defence in the first quarter with good work on the boards from Tia Kelly Stephens and Rachel Huijsdens. Killester still lead 13-9 after 10 minutes as Aisling McCann picked off the first open three and rifled a superb assist to Aine McDonnell.
Mercy had less turnovers and more rebounds and still found themselves trailing by 11 points in the second quarter. Ingleâs side were hamstrung by the 14 points they coughed up on second chance opportunities in the first half. Killesterâs ability to kick out to the perimeter gave open threes to Ali McGrath and Ali Connolly for a 28-21 half time lead.
Killester were swinging the ball to soak up the shot clock in the third, but Sarah Fitzpatrick was coming up with big scores and Mercy had the lead back to four points before another timely three from Caoimhe Moore. Aine McDonnell came off the bench for a double-double worthy of her MVP award.
Mercy were matching Killester for intensity in the fourth quarter as Emily Black followed up a triple with a defensive stop. Good baskets from Megan Connolly and Aine Brady as well as 77% free-throw accuracy brought the game in to five points but Killesterâs hunger shone through again with a 6-0 run to close out the game.
Pyrobel Killester: Aisling McCann 13, Caoimhe Moore 11, Aoibheann Byrne 2, Aoife OâHalloran 3, Ali Cleary. Substitutes: Alyson Wall, Ali McGrath 6, Sarah Malone, Ali Connolly 10, Aine McDonnell 15, Eva Gleeson.
DCU Mercy: Megan Connolly 7, Enya Brady 2, Emily Black 7, Sarah Fitzpatrick 11, Tia Kelly Stevens 9. Substitutes: Sinead Hession, Saoirse Power Cassidy 6, Kate Mulligan, Catlin McFeely, Erica Cody Kennedy Smith, Rachel Huijsdens 7, Kate Wood.
HT: Pyrobel Killester 28, DCU Mercy 21
MVP: Aine McDonnell