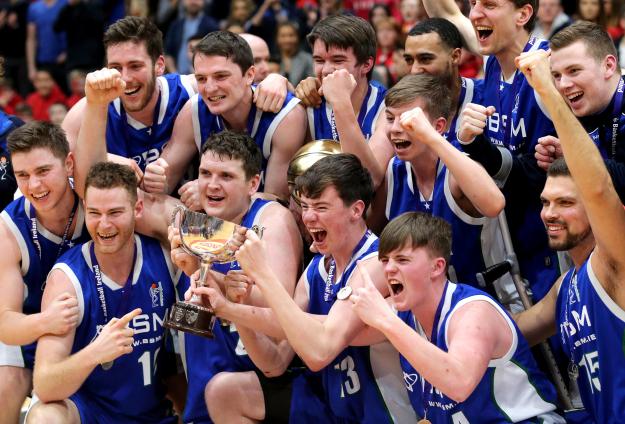 Saturday, 30 January 2016
Hula Hoops Presidentsâ National Cup Final
Maree BC 78, C&S Blue Demons 64
National Basketball Arena
Report: Mary McGuire
Pride, passion and determination are the only words to describe a phenomenal victory by Maree BC in this eveningâs Hula Hoops Presidentsâ National Cup final that saw them scoop the title for the first time ever.
Speaking afterwards, an overwhelmed Maree BC Head Coach John Finn stated: âItâs brilliant â our performance in the second half especially. We knew we were lucky to be only three points down at half time as we hadnât really played.
âDemons are so experienced and it was great to see the lads do well in the second half. It was brilliant the way some of the lads came on and just went for every ball, they never gave up.â
Indeed, the clash between C&S Blue Demons and Maree BC was pipped from the off to be an absolutely thrilling game, and it delivered on all counts, as the game was tied nine times throughout. C&S Blue Demons were hoping to bag their third title in fourth years, but Maree, who had made it to the final for the first time, dug deep and had the crowd on their feet as they took control and drove to victory in the fourth quarter.
Demons were first off the mark early on through Shane Duggan, while the hugely impressive and always on-form Kenneth Hansberry opened Mareeâs account. It was never going to be a simple win for either team though, and with superb scoring from Mareeâs Paulius Peldzius and Eoin Rockall matched brilliantly at the other end by Brian OâNeill and David Murphy it was game on.
Demons held the lead going in at the break (38-34), after Shane McCarthy hit the target repeatedly and also assisted a number of his sideâs other scores, while Mareeâs Cathal Finn and Rockall were linking up at the other end in fantastic fashion and it was clear the game was going to go down to the wire.
Rockall, Finn and Hansberry were all on target for Maree in the third, while McCarthy, OâNeill, Murphy and OâLeary kept Demonsâ scoring ticking over, and they again held the edge as the clock ticked into the last quarter (55-51).
The fourth quarter though was where Maree showed their true spirit, and in a display full of pride and determination, slowly began picking away at the Demons offence. Rockall inspired from the top of the key, Peldzius made his presence felt and Hansberry was on target at every time of asking. Despite the best efforts of Buckley and McCarthy, there was just no breaking the momentum that was now firmly in Mareeâs favour, and they drove home to their first ever Presidentsâ Cup title in style.
Maree BC: Cathal Finn 13, Padraig Burke, Colm OâHagan, Kenneth Hansberry 18, Paulius Peldzius 19. Substitutes: Charlie Crowley, Eoin Rockall 21, Stephen Commins, Darren Commins, Darren Callanan 1, Enda Walsh 6, Adam Cox, Ciaran Blaney, Sergi Marti, EJ Lewis.
C&S Blue Demons: Shane Duggan 4, Shane McCarthy 6, Shane Buckley 16, David Murphy 9, Brian OâNeill 12. Substitutes: Cian Clernon, Craig Duggan, Robbie McGowan 7, Jorge Gonzalez 3, Mark OâLeary 7, Dylan Olden, Glen Dunlea, Tim OâHalloran.
HT Maree 34, C&S Blue Demons 38
MVP: Eoin Rockall