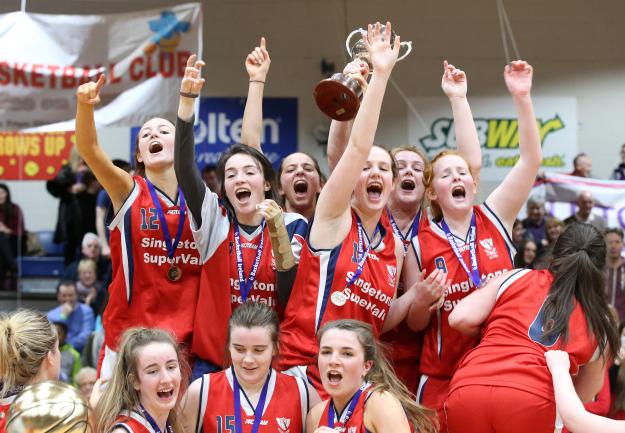 Sunday January 31st, 2015
Hula Hoops Under 18 Womenâs National Cup Final
Singletonâs SuperValu Brunell 72, DCU Mercy 69
(After overtime)
Report: Mary McGuire
âA day for the underdog,â is how Head Coach Kieran OâLeary described Singleton Super Valu Brunellâs win in the Hula Hoops Under 18 Womenâs National Cup final this afternoon as, after the thrilling and action-packed game went to overtime, his side dug deep to drive home to victory.
âSeeing the game tied, it brought back nightmares of the Cup two years ago and I thought, not again,â OâLeary continued.
âIt feels fantastic, these girls deserve this win, they were the underdogs coming into the game and their parents said it was a privilege to have them here â what about winning it!? An absolutely fabulous feeling."
Indeed, MVP Alex Macheta will be the name on everyoneâs lips down in Cork this evening, as a thoroughly inspirational performance saw her push her side into the lead in overtime and ultimately, helped them hold onto their lead as the clock ticked down.
From the moment the ball was thrown in, everyone in the Arena knew that this was going to be a battle of epic proportions with talent on either side including Macheta, Laura Morrissey and Amy Murphy for Brunell and Aoife Maguire, Rachel Huijsdens and Sara Guebaili for Mercy. Indeed, the first half was truly a shooting showcase at either end and as Macheta continued to be a thorn in DCU Mercyâs side, it was the introduction of Aoife Maguire for Mercy that proved to be crucial, as she helped drive the Dublin side to a 32-31 point lead at the break.
The second half was even more nail-biting, as Murphy and Morrissey helped put Brunell back into the lead, but determined play from Anna Brennan and Elizabeth Black kept the game neck-in-neck and it was all to play for in the last quarter as the lead exchanged hands constantly. The teams were level on six separate occasions throughout and it was in this quarter that Macheta and Murphy truly stood up and were counted for Brunell, while Maguire and Brennan netted some vital scores for Mercy at the other end to see the game tied on 61-apiece on the final buzzer.
As overtime got underway though, it was Alex Macheta who was Brunellâs inspiration, as both she and Amy Murphy kept Brunell driving forward and despite the pressure, managed to hold their cool to send Brunell to a glorious and hugely-deserved victory.
Brunell BC: Sarah Morrissey, Laura Morrissey, Claudia OâLeary, Andrea Moynihan, Ciara OâShea, Sinead Warren, Rebecca Miller, Kelly Murphy, Alex Macheta, Amy Murphy, Orla Casey, Megan Hartnett.
DCU Mercy: Elizabeth Black, Anna Brennan, Rebecca Brennan, Cliona Hamill, Aoife Maguire, Deborah Sealy, Ali Donohoe, Rachel Huijsdens, Ruth Fennell, Sara Guebaili, Maria Petrakova.
MVP: Alex Macheta